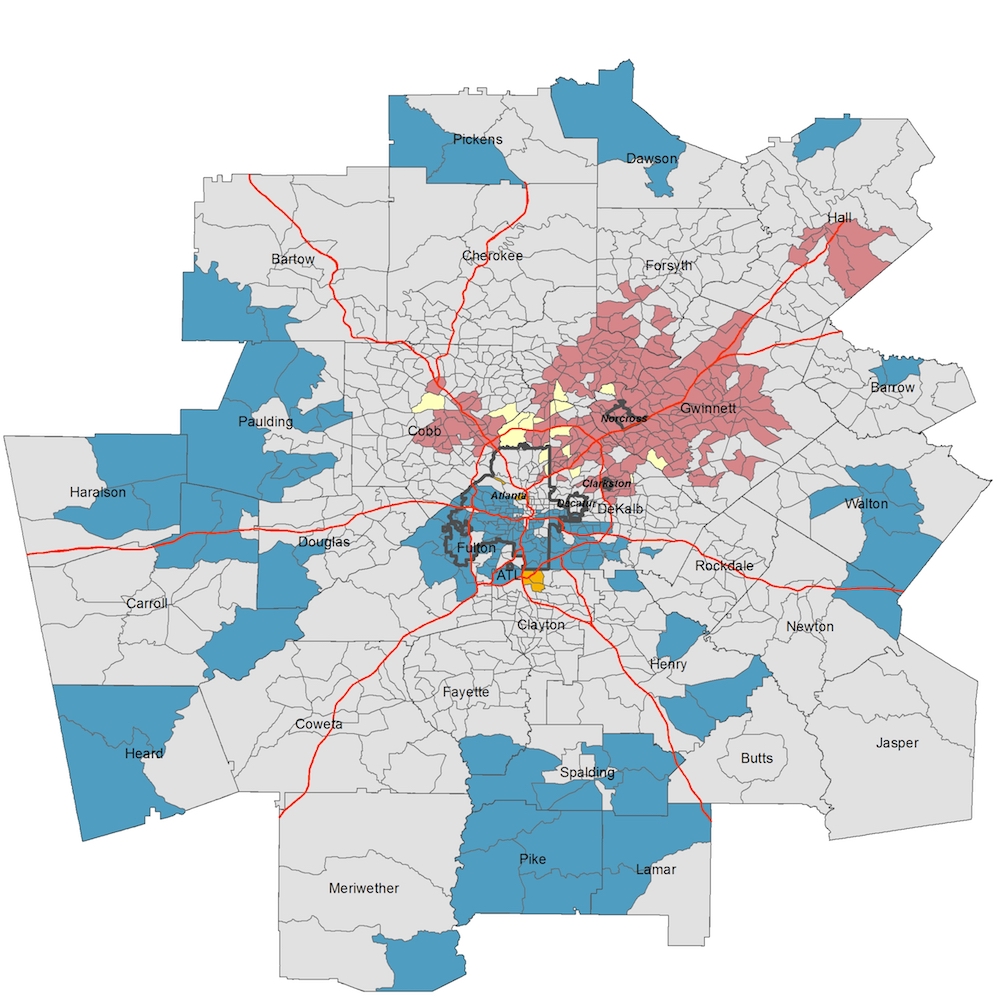 In fall 2017, Welcoming America, a global nonprofit headquartered in Decatur, Georgia – the leader of a nationwide network of over 100 municipal “welcoming cities” – launched a new initiative in metropolitan Atlanta: the One Region Initiative.

The first of its kind in the United States, this initiative aims to “create an inclusive metro Atlanta region in which all people, including immigrants and refugees, have the opportunity to reach their greatest potential, engage with the larger community, and fully contribute their talents.” To achieve this goal, the program plans to gain the “commitment of local government, business leaders, community organizations, immigrant and refugee communities, and members of the receiving communities to create and then adopt welcoming practices.

This new initiative has commenced amid tumultuous rhetoric and policy changes regarding immigration at many levels of government – national, state, and local – with a wide range of perspectives regarding receptivity toward newcomer populations. Jordyne Krumroy, Welcoming America’s regional manager, describes why Atlanta was chosen for this new initiative in light of that context:

Metro Atlanta, like many other regions in our country, has been and continues to rapidly change. As with all drastic change, we have felt the vibrations of migration and heard the echoes of fearful rhetoric. The stagnation of federal reform has sent shockwaves into communities and now, more than ever, we need common ground. That’s where the One Region Initiative is positioned.1

In our recent article published in Papers in Applied Geography, “Receptivity and the Welcoming Cities Movement: Advancing a Regional Immigrant Integration Policy Framework in Metropolitan Atlanta, Georgia,”2 we note that metropolitan areas like Atlanta – which are assemblages of multiple municipalities and jurisdictions – form complex, and in many cases powerful economic, social, and cultural regions. But as a unit of analysis, metropolitan areas have been largely absent from policymaking conversations concerning immigration. In part, this is due to the nature of political geography and policymaking within jurisdictions that include municipal (city and county), congressional district, state, and federal. Atlanta, Clarkston, Decatur, and Norcross3 are four municipalities in the Atlanta–Sandy Springs–Roswell, Georgia, Metropolitan Statistical Area (hereafter referred to as the Atlanta MSA) which are affiliated with the “welcoming cities” network and comprised the initial analytical focus of our article. Using local indicators of spatial association, we examined the geography of the foreign-born population, comparing the welcoming city municipalities to each other and to municipalities in the overall Atlanta MSA. We believe current welcoming cities, partner organizations, and individuals might use such data, derived from application of spatial analysis, in order to better identify potential points of official or unofficial collaboration in other municipalities within the Atlanta MSA.

As figure 1 to the right shows, of the nearly one million foreign-born persons in Georgia (around one in ten Georgians are foreign-born), the largest concentration of immigrants in the state is found within the Atlanta MSA. Unlike historical immigrant gateways like New York City, Chicago, or San Francisco, however, the Atlanta MSA is a new immigrant gateway without a long history of receiving diverse immigrant populations. 4

While our data suggests that these municipalities within the Atlanta MSA, with their significant clusters of immigrant populations, are key places in which to consider further discussions about the potential for a regional welcoming policy framework, there are broader contextual challenges to this effort.

As we discuss in our article, some of the challenges to the regional welcoming framework are due to the many structures, agents, jurisdictions, and jurisdictional fragmentation involved in a region. Moreover, regional welcoming and integration efforts are complicated not only by the many municipal jurisdictions within the Atlanta MSA, but also by the often conflicting immigration-related policies of different jurisdictions and governments – federal, state, and local. Such geographic unevenness of law and policy is exemplified in part by some counties within the metro area being members of the 287(g) program with US Immigration and Customs Enforcement (ICE). In this program, state and local police officers collaborate with the federal government to enforce federal immigration laws. However, according to the American Immigration Council, “the 287(g) program has been costly for localities, has not focused on serious criminals, and has harmed the relationship between police and local communities.”9 Likewise, there are often inconsistencies around education policy, particularly regarding undocumented youth in Georgia, many of whom reside within the Atlanta MSA.

The region’s characteristically sprawling automobile-oriented landscape with limited public transportation options beyond Atlanta’s core presents an additional challenge to immigrants. Driving is the dominant, and in most cases, necessary mode of transportation throughout the region.

State-level policies restricting access to driver’s licenses therefore directly impact some immigrant populations’ ability to successfully integrate and participate in the broader region. Restricting access to driver’s licenses for some populations not only hurts immigrants, but also creates ripple effects in communities more broadly throughout the metropolitan region by limiting mobility, diminishing public safety, and contributing to a hostile environment.10

Despite these challenges, however, opportunities remain for the advancing the Atlanta MSA as a welcoming region. The Atlanta MSA’s immigrant population continues to grow, as does the region’s overall population and economy. The One Region Initiative is currently conducting community listening sessions in several Atlanta metro area counties. A steering committee and working groups comprised of members from a variety of community sectors are helping to guide the development of a Welcoming Regional Plan, which is expected to be completed in July 2018. Regarding the long-term goals for the regional initiative, Daniel Valdez, network director at Welcoming America, says:

We are confident that this regional, bipartisan approach will follow suit with other regional efforts that have transcended political and geographical boundaries and continue to build on the work that local governments have already done in the field of immigrant inclusion. At the end of the day, we’re working to create a region in which all people, including immigrants and refugees, have the opportunity to reach their greatest potential, engage with the larger community, and fully contribute their talents.11

Only time will tell whether local leaders in these municipalities will work across jurisdictional boundaries to address the integration of a significant and growing segment of their populations through a regional approach. As Welcoming America’s Atlanta regional manager Krumroy notes, the organization’s “end goal is to create a welcoming region where everyone feels like they belong and has the opportunity to prosper.”12 We hope that our research about this and other aspects of immigrant integration in the Atlanta region will help inform effective policy and help make this goal of a region that offers opportunity to all a reality.