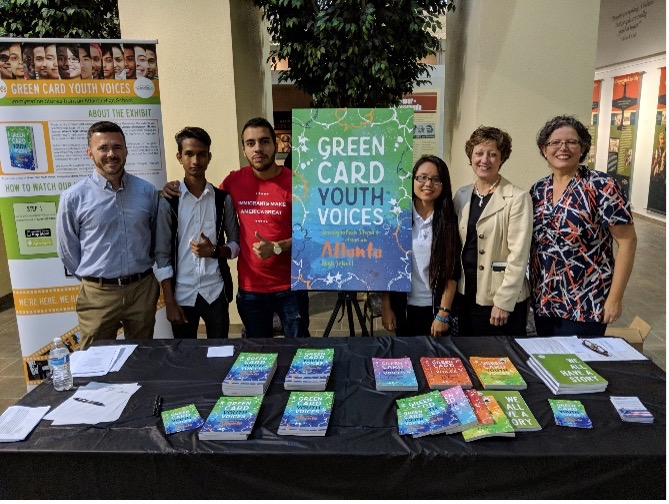 How do immigrant stories impact perceptions of immigrant experiences in a major-emerging immigrant gateway such as Atlanta?

From 2016 to 2018, an interdisciplinary community-engaged project incorporating community-based participatory research methodology, explored how the role of storytelling is integral for the transference of knowledge, history, and sense of purpose. This is important not only for the storytellers but also for those who are impacted by stories they hear. Stories capture our attention, create emotional connections, and compel us to action. In an effort to inform—and possibly reshape—the public narratives regarding twenty-first-century immigration, we embarked on a multi-faceted immigrant storytelling university-community partnership that included both local stakeholders and a national nonprofit. The outcomes help us understand how the views of receiving communities change over time with respect to migrants through their own stories, thus impacting the work of immigrant-serving organizations, such as Georgia-based Welcoming America, a nonprofit committed to implementing a variety of initiatives to cultivate welcoming cities and welcoming regions.

Our project gauges the impact of the 2018 publication, Green Card Youth Voices: Immigration Stories from an Atlanta High School. That effort documents stories of youth migrants about their journeys from their homelands to their experiences in receiving communities. This fourth collection in the Green Card Voices (GCV) youth book series, published by Minneapolis-based nonprofit Green Card Voices, features personal essays authored by high school-aged immigrants living in different US cities. The Atlanta-based book—the first from a southeastern city—features twenty-one immigrants from sixteen countries, as well as photographs, art, and videos. The project also involved the participation of over thirty students from Kennesaw State University who engaged with the project through a service-learning and community writing initiative. The applied outcomes from assessing the public’s responses to the project helped Green Card Voices expand their impact and development of other projects, including books, digital narratives, art exhibits, and public outreach. The aim is to scale-up these projects throughout the US to increase understanding about migrant experiences and acceptance of migrant communities more broadly through storytelling.

Our project, funded in part by the National Geographic Society, the Kendeda Fund, and a Strategic Internationalization Grant from the Kennesaw State University Division of Global Affairs, examined the stories from the immigrant youths and how these stories shaped audience perceptions about immigration. While the project initially focused primarily on producing a published anthology of first-person essays and an archive of digital narratives that were shared publicly through readings and author events, the larger aims were to use storytelling as a tool to prompt deeper exploration and understanding in Atlanta about immigration. Our study found that collaboration through university-community partnerships can significantly increase awareness about topics such as immigration, civic engagement, and leadership development. We assert that inclusive storytelling from both positions—the storyteller and story-hearer—are vital for improved immigrant integration, specifically and more broadly, in designing an innovative and inclusive future for all Atlanta residents.

From a place-based perspective, we chose the Atlanta region for this project for several reasons. First, with the exception of Green Card Voices staff, the researchers on this project all reside in the Atlanta region and are invested in applied research benefitting our region and local communities. Second, the Atlanta metropolitan area is a “major-emerging” new immigrant gateway destination and a “twenty-first century gateway.” Other such gateway regions include the Austin, Charlotte, Las Vegas, Orlando, and Phoenix metropolitan areas—each characterized by high growth rates of foreign-born populations in recent decades as compared to traditional immigrant destinations of the past, along with suburban immigrant settlement patterns throughout the metropolitan region. Third, two members of the research team are co-founders of the Georgia Immigration Research Network (GIRN), and this work aligns with the purpose and intent of GIRN. Finally, our overall methodology relies upon a community-based participatory research (CBPR) framework, involving a multi-year, interdisciplinary university-community partnership: university research team members with faculty from the disciplines of English, Geography, and Social Work and Human Services; the Minneapolis-based nonprofit organization Green Card Voices, which produces the Green Card Voices series; and three schools from the DeKalb County School District (Clarkston High School, Cross Keys High School, and the DeKalb International Student Center).

The immigrant youth who volunteered to participate in this project represent a variety of immigration statuses, countries of origin, age, and time spent in the United States. They shared their individual stories of US resettlement in digital and written formats and later orally at public readings. Their stories provide a unique look into the struggles, challenges, motivations, and changes in the perceptions of young immigrants. Throughout 2018 and 2019, we featured the project at public events and venues such as the Alliance Theater at the Woodruff Arts Center in Midtown Atlanta, Museum of History and Holocaust Education at Kennesaw State University, Decatur Book Festival, Decatur and Brookhaven Public Libraries, World Refugee Day at the International Center for Civil and Human Rights in Atlanta, TESOL 2019 International Convention and English Language Expo at the Georgia World Congress Center, and South Atlantic Modern Language Association Conference. At select events, paper surveys captured attendee feedback to the stories shared.

An accompanying art exhibit featuring portraits of each immigrant author with biographical information and links to digital versions of their stories was also on display at other venues, including Hartsfield-Jackson Atlanta International Airport—the world’s busiest airport—where over two million people had the opportunity to experience the exhibit during the June 2019 Immigrant Heritage Month (based on enplanement data provided by the Federal Aviation Administration, the Atlanta Airport, and the City of Atlanta Office of the Mayor). Two panels from the exhibit were also part of the inaugural national Green Card Voices touring exhibit on display at the US Department of Education in Washington, DC in May 2019.

Drawn from an oral storytelling tradition, facilitated by Green Card Voices founder and executive director Dr. Tea Rozman Clark, the students share their stories first in video format, then the stories expanded, often with personal artifacts, and are archived in a digital library maintained by the organization. The written, published essays grow from transcriptions of the recorded stories. This methodological facet of the project is part of what makes it unique. The following represent several examples of immigrant youth student digital video interview narratives (archived and available publicly at greencardvoices.org):

Our project took the immigrant youth stories to the broader public in the southeast and now across the US. Public events and discussions can impact public perceptions about a particular issue such as immigration. To assess program impact, we gathered qualitative survey data from audience members who attended events where the immigrant student authors shared the experiences. We surveyed the attendees at four public readings in 2019 (a total of fifteen public events were coordinated as part of the dissemination strategy for the Green Card Youth Voices Atlanta project). In addition to the experiences of the immigrant authors, the stories also impacted the understanding of immigrant experiences among participants at the public events. Indeed, program attendee survey participants (n=49) indicated an overall moderate to significant impact on their perception and understanding of immigrant experiences.

As an example of participant comments, one participant observed that “It cannot be understated how much of an impact that something I initially view as a school project can have on the communities that are so close to us. Immigrant stories are not monolithic.” While another participant stated that “The stories are as diverse as the individuals themselves. Hearing the stories and how much the students work toward success and furthering their education.” Furthermore, another participant responded, “Every person has a story that goes beyond the generalities & statistics, and that their story deserves to be told.” Such qualitative responses, along with participant Likert-scale responses, indicate that the public dissemination of the immigrant youth authored stories about their own immigration experiences had a positive impact on public perception about immigrant experiences in the Atlanta metro region.

Community-engaged work matters. This project is an example of a university-community partnership in the Atlanta region that impacted immigrant youth, university students and faculty, secondary school teachers, community organizations, and members of the receiving society. When non-immigrants’ perceptions shift toward warmer receptivity, the likelihood of expanded empathy and broader understanding and cooperation increases. The personal migration stories and experiences of local immigrant youth themselves is compelling. Sharing such stories in the local region can profoundly shape and re-shape the receiving society’s perspective of immigrant experiences, potentially leading to more inclusive public policy.

Paul N. McDaniel is an Associate Professor of Geography in the Department of Geography and Anthropology, Norman J. Radow College of Humanities and Social Sciences, at Kennesaw State University.

Lara Smith-Sitton is an Associate Professor and Director of Undergraduate Studies in the Department of English, Norman J. Radow College of Humanities and Social Sciences, at Kennesaw State University.

Acknowledgements: We first thank Dr. Tea Rozman Clark and the Green Card Voices organization for the partnership that brought this project to life. We also thank the National Geographic Society (Grant Number NGS-50802E-18) for their funding and support of this Atlanta-based project through their Documenting Human Migration program. The Kendeda Fund also supported this project through a grant issued directly to Green Card Voices in partnership with Dr. Darlene Xiomara Rodriguez at Kennesaw State University (KSU). A 2016-2017 Diversity Fellowship from the KSU Office of Diversity and Inclusion and a 2017-2018 Strategic Internationalization Grant from the KSU Division of Global Affairs, allowed Dr. Rodriguez the time to work with the schools and community agencies to cultivate community-partner relationships and the lead time needed to work with the DeKalb County School District and school principals for their approvals. In addition to the administrative support at each of the schools, we especially would like to thank the project team leads at each of the schools for their tireless efforts: Julie Goldberg (Clarkston High School), Jacob Eismeier (Cross Keys High School), and Jan Anglade (DeKalb International Student Center). We also thank the many community partners, including the Latin American Association, and Welcoming America, as well as the nearly 50 KSU undergraduate and graduate students throughout the duration of the project, including Rajit Das and Lina Tuschling (PhD program in International Conflict Management), Allison Dobo (MA program in Integrated Global Communication), and Jennifer Bledsoe and Eliza Galvez (Master of Science in Social Work Program) for their invaluable assistance. In like fashion, we recognize Amoshia Blakeney, a KSU student in the Master of Arts in Professional Writing program, for her assistance on this project via her 2019-2020 graduate research assistantship, which was funded by the National Geographic Society grant. Finally, we thank our respective departments at KSU for their support and encouragement of our community-engaged scholarship: the Department of English and the Department of Geography and Anthropology in the Norman J. Radow College of Humanities and Social Sciences, and the Department of Social Work and Human Services in the Wellstar College of Health and Human Services (the data collection for this study is approved by KSU IRB Study #19‐237: Green Card Youth Voices: Public Impact and Receptivity). Most importantly, we thank the young immigrants for their courage, perseverance, and dedication in the telling of their stories. A project like this requires many stakeholders; therefore, as we celebrate inclusive storytelling about immigrant youth in Atlanta we honor those who made it possible.

The authors would also gladly connect anyone interested in learning more directly to Green Card Voices.