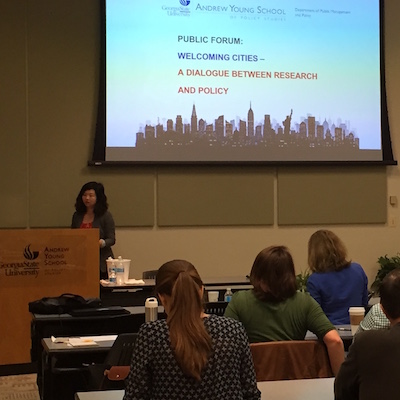 An Introduction to “Immigrant Atlanta” and Beyond: A Tour of the Work of the Georgia Immigration Research Network

With the context of recent, rapid, and diverse immigrant population growth in the Atlanta region, a group of researchers at Georgia Institute of Technology, Georgia State University, and Kennesaw State University have launched a collaborative research network.

This group, the Georgia Immigration Research Network, will study this new population and economic growth and the impact of immigration to Georgia and other emergent immigrant destinations. The research being conducted by these scholars fits into national and global conversations about what drives migration, and the new “majority-minority” shift in US cities and counties. What follows is an introduction to spatial, social, and political change in the region due to recent immigration in Georgia, and snapshots of ongoing research by some members of the research network.

Although most of metropolitan Atlanta’s emerging immigrant growth can be ascribed to Gwinnett County more generally (one of the few counties in the US South transitioning to majority-minority between 2010–13), no single place in Georgia has grown faster from immigrant relocation and migration than the City of Norcross, Georgia (est. 1870). Commissioned by the City of Norcross and the Gwinnett Village Community Improvement District, Kim conducted an intensive studio research project with graduate students in City Planning at Georgia Tech which assessed both the civic engagement opportunities and economic contributions of immigrant groups to Norcross. Our team collected street-level survey data on residents’ perspective of immigrant integration1 and conducted in-depth focus groups within the Latino and Asian community via over thirty Atlanta area non-profit organizations, chambers of commerce and churches, in addition to the Latin American Association (LAA), Asian Americans Advancing Justice Atlanta (AAAJ), and the national offices of Welcoming America.The Georgia Tech study of the City of Norcross revealed that the “ethnic economy” in Norcross, despite its relatively recent establishment in the area, already comprises more than 27 percent of all businesses in the city, contributed to more than $897 million in annual sales, and employed 9,512 persons in 2015. While Georgia businesses overall have an average of $12,000 in retail sales per capita, Norcross area businesses, driven largely by such ethnic entrepreneurs, have retail sales per capita upwards of $70,000 per year. Moreover, these minority-owned businesses (Asian, Latino, and African American) were found to be well integrated into the political fabric of Norcross – spread evenly across all neighborhoods of the city – and showed a high share of representation of Hispanic, Indian, Chinese, Korean, Middle-Eastern and Vietnamese businesses. Between 2009 and 2015 Norcross became an ethnic entrepreneurship hub for immigrant business owners and consumers across the region, with the city’s population growing by more than 180 percent in just five years, with a significant majority of in-movers being Hispanic/Latino or Asian.One notable example of such contributions is Hong Kong Supermarket on Jimmy Carter Boulevard, which is owned by Vietnamese entrepreneur Ben Vo. Hong Kong Supermarket helped to revitalize a previously empty suburban plaza that had seen the withdrawal of major chain stores (particularly supermarkets) from the area in general. Today the plaza and grocery store draws shoppers from not just the metro area or even Georgia, but from out of state areas from as far away as Charlotte, North Carolina.

A Survey of Latino Experiences in Metropolitan Atlanta: The Regional View

Darlene Xiomara Rodriguez, Kennesaw State University
WellStar College of Health and Human Services Darlene Xiomara Rodriguez worked with the Latin American Association (LAA) of Georgia in 2015 to conduct a Latino Community Needs Assessment of the region. The LAA is the largest direct service provider for Latinos in the Southeastern United States, and is an anchor institution for the Latino community. The Kennesaw State University (KSU) research team conducted a survey of Latino residents between January and July of 2015, led eight focus groups, and completed a community report.2Findings from the survey highlight both the current barriers that Latinos in metropolitan Atlanta face and document finding employment and becoming citizens as priorities for respondents. Specifically, only one in five survey respondents spoke fluent English, and over one third (36 percent) of respondents indicated that language difficulties prevented them from finding a job or getting a better job. Almost 45 percent of survey respondents reported that they did not have a driver’s license, which also acted as a barrier to finding a job, particularly given that about 11 percent of respondents also did not live within walking distance of public transportation.

Despite existing labor market barriers, immigrant respondents were interested at high levels in obtaining their GED (37 percent) or college degree (46 percent), with more than half (53 percent) interested in starting their own business. The survey also revealed that although access to public services and opportunities to engage with broader communities were limited, there was strong interest in learning US customs and values (49 percent), becoming a US citizen (50 percent) and voting (41 percent). Increasing levels of personal, political, and economic participation were very important to a large majority of Latino residents in the Atlanta area.

A National Understanding of “Welcoming”: Cities Across the United States

Cathy Yang Liu and Xi Huang, Georgia State University
Andrew Young School of Public PolicyThe work of Xi Huang and Cathy Yang Liu has added nuance to the national picture of Welcoming Cities and Counties, places across the United States that have a range of policies directed at new immigrants. These initiatives include civic engagement, economic development, public safety, and community building as broad categories of immigrant integration strategies and programs. In addition, new Welcoming Cities are not uniform in size, or in immigrant residential population growth.

The Role of Governments: Local, State, and Federal Policy on Immigrant Integration

Paul McDaniel, Kennesaw State University
Department of Geography and Anthropology Paul McDaniel, previously a research fellow with the American Immigration Council in Washington, DC, examines immigrant integration at a variety of different scales, tackling the issue of local responses to immigration as well as potential conflict with state and federal policy. As he sees it, immigrant experiences are shaped by the compounding experience of the multiple scales at which “immigrants navigate their daily lives: the nation, the city, the neighborhood, the home, and the self.”4 His research is guided by the question of how governments at different scales are responding to the needs of immigrants and other communities, as communities reshape themselves into places of welcome for new immigrants.He has conducted interviews with various agencies and government officials in a range of cities currently participating in the Welcoming Cities program, including Atlanta (a major emerging gateway), Nashville, Tennessee (also a major emerging gateway), Dayton, Ohio (a low immigration metro area), and Chicago, Illinois (a traditional and major continuous gateway). His current study explores receptivity (or welcoming-ness) along a continuum: some places have low receptivity and are not very inclusive of immigrant groups, while some places have high receptivity, but most places are somewhere in the middle.5 Additionally, his research examines the conflicts that can occur between different scales of government and community. For example, while a city or town might see itself as proactively welcoming of immigrant residents and inclusive of diversity, the place might be in a state that is not as welcoming of immigrants. Such situations can lead to conflicts in policy, and tensions in local governments. McDaniel has found that “although receptivity is constructed through intentional and unintentional practice at all scales, the scales don’t always align, and can often run counter to each other (collision of scales).”6 In Atlanta, McDaniel and Rodriguez have been interviewing non-profit and other community stakeholders who participate in immigrant integration efforts across the metropolitan region.