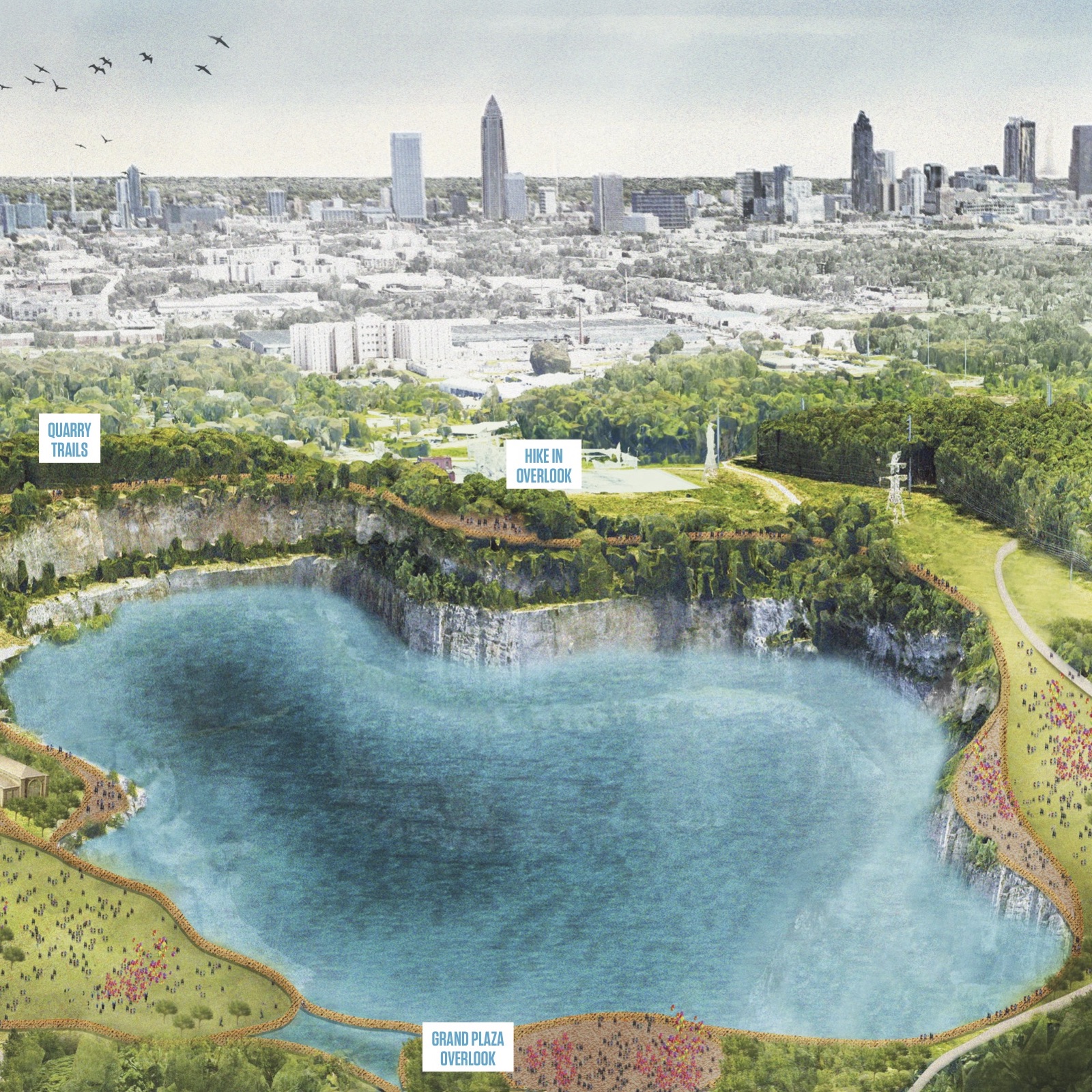 They also started a valuable conversation about what it will take to truly honor the city’s public realm in the years ahead. That conversation continues at Atlanta Studies this week with a pair of essays that propose modest, but meaningful, changes to two vital pieces of the city’s infrastructure: Hartsfield-Jackson International Airport and Quarry Lake, the centerpiece of the city’s proposed Westside Park. Together, Palmer and Pendergrast suggest that Atlanta’s future may depend on its ability to create public spaces that are both equitable and accessible. And they remind us all that this process begins next week, when Atlantans head to polling stations to elect the city’s next mayor.

Below, in the second of these essays, Mark Pendergrast makes the case that Quarry Lake should be open for recreational use by city residents. Pendergrast received the Judy Turner Prize at the 2017 Decatur Book Festival for his book, City on the Verge: Atlanta and the Fight for America’s Urban Future. A companion essay by the prize’s co-recipient, Hannah Palmer, can be found here.

Does Atlanta have the creative capacity and vision to develop the Westside Park as a true community asset?

Will the new lake there be its beloved recreational center?

The Westside Park is literally the biggest promise of the BeltLine. Yet the Atlanta Department of Watershed Management apparently has no intention of allowing people anywhere near the new quarry lake, other than to gaze longingly at it. At a September 2017 community meeting, I asked Atlanta Department of Watershed Management Commissioner Kishia Powell if she planned to allow recreational use of the new lake in the quarry that will be the centerpiece of the nearly 600-acre Westside Park. In other words, will people be allowed to fish, swim, kayak, or canoe in the lake?

No. She said that the reservoir would be too deep, with a sheer drop-off from the edge of the lake, so it would be too dangerous to use, even for fishing. Also, because it would serve as an emergency water supply for the city, no one should be allowed in it.

Powell’s vision for this new body of water differs substantially from that of Yale University city planner Alexander Garvin, author of What Makes a Great City, who spotted the quarry from a helicopter in 2004 as he explored the future BeltLine corridor and surrounding areas. In The Beltline Emerald Necklace, his vision for the parks along the BeltLine, which was published later that year, Garvin wrote that the quarry could become a “splendid lake that would provide the residents of the city with wonderful opportunities to sail, kayak, canoe, and fish” (117).

There are many other lakes in municipal parks around the country that provide recreational opportunities for residents, including quite a few former quarries. For instance, the town of Shakopee, Minnesota, has stocked its Quarry Lake Park with trout for fishermen and hosts the local water skiing association. The larger and older Quarry Lakes Recreation Unit in Fremont, California, features Horseshoe Lake and Rainbow Lake where visitors can swim in designated beach areas, picnic, play volleyball, fish, and enjoy non-gasoline powered watercraft. The argument that no one should be allowed to use the lake because it is a potential source of drinking water does not hold water, so to speak. Lake Lanier is also a reservoir for the city of Atlanta, and its water actually is drunk regularly by the city’s residents, after it travels down the Chattahoochee River, where it is also enjoyed by boaters and fishermen. The fact that motorboats and sailboats ply Lanier’s waters and that people swim in it doesn’t matter, because it is treated before it becomes potable water.  And, in fact, the water in the quarry lake, which will be that same raw water that started in Lake Lanier and traveled down the river, will be of that exact same nature. It will be treated after it leaves the quarry – for emergency use – like any other city raw water source.

While it is true that the walls of the quarry lake will be steep in many places and its waters deep, it need not be inaccessible when full. Let me suggest a solution. Repurpose the access road that spirals down to the bottom of the quarry from its edge – previously used for huge trucks to transport granite out of the quarry – as a path to let people walk to the edge of the water once the quarry lake is filled. Blast out a larger shallow shelf in the nearby quarry wall to accommodate boating, fishing, and waterside leisure access areas, including a swimming area with lifeguards.

This lake is a gem that will be within the city limits, part of a huge new park, much larger than Piedmont Park.  The tunnels to and from the quarry, connecting it with the Chattahoochee River and the Water Works, will cost an estimated $46.1 million, with a projected completion date estimated for late 2021, with the first phase to be opened in 2019. The complete cost of the park project is estimated at $280 million. Given this budget, a bit of added expense to allow for public recreational enjoyment of the lake makes sense.  All it takes is political will and good planning and engineering.

The fact that the water will be deep at the edge of the shelf has no greater impact on risk than any other lake or even the deep end of a swimming pool. I now live in Vermont near Malletts Bay on Lake Champlain. It too is hundreds of feet deep, yet I sail, kayak, and swim in it regularly. So do thousands of other people on the 100-mile-long lake. It also serves as the drinking water for adjacent cities, once it is treated.

As for boating, Atlanta could easily build safe docks and access points for kayaks and canoes and perhaps small sailboats, though I hope that no motorboats or jet skis would be allowed.

Fishing? That is a no-brainer. Let people fish from boats or designated spots on the shore.

I ran these ideas by Alexander Garvin, who wrote back:

Surely, Atlanta has enough imagination to make what could be its largest park, more than a tub filled with excess water!

The City should embrace the goal of solving this challenge, rather than fencing the quarry off. Atlanta wanted the Olympic Games and figured out the partnerships it needed to craft a proposal that secured its historic place – against large odds – as an Olympic host city. Twenty years later, there is an opportunity of a similar scale to create a recreational icon for the entire city to enjoy regardless of socioeconomic status.

As the design of the quarry park including its lake goes forward, it is thus incredibly important that it not just become the equivalent of a huge water storage silo at which people can look from a distance only. Just as the ponds in the Old Fourth Ward Park and Cook Park were designed to be integrated into the recreational fabric of the surrounding parks, so should the quarry lake and park design be similarly integrated to allow for multi-faceted recreational use of what may well be the most spectacular piece of public space this city will have.

To that end, on July 25, 2017, the City of Atlanta issued a Request for Proposals (RFP) for designing the Westside Park, which includes conceptual drawings by the Atlanta City Studio. Careful review of one of these drawings shows the completed lake with what looks an awful lot like a potential lake access and recreation area where the old quarry road runs into the surface of the filled lake. But the way the RFP is worded makes it clear that ideas for recreational use of the new quarry lake were not encouraged. Proposals were submitted in the fall of 2017 but the winner has not been announced, nor have the proposals been made public.

At talks about my book, City on the Verge, around the city – at the Carter Center, Atlanta History Center, and Decatur Book Festival, among other venues – I have been calling for recreational access and use of the quarry lake. That call has been met with broad and strong applause from the audiences. I urge anyone interested in maximizing the value and use of the quarry park and its centerpiece lake for civic and recreational purposes to help make this vision become reality as design, collaboration, and public participation efforts go forward. Please urge the Parks Department, Department of Watershed Management, the Mayor, and City Council to make it happen. And perhaps more importantly, ask mayoral candidates Mary Norwood and Keisha Lance Bottoms where they stand on the issue of recreational use of the new quarry lake, and let them know that their answer might sway your vote. The Quarry Park could also benefit from a non-profit or conservancy group of benefactors that could push for more a progressive design. Perhaps this article will help inspire the formation of such a group.

I don’t live in Atlanta anymore, but I do care deeply for the city, enough to write City on the Verge about it. And the prospect pains me that the city will have this beautiful new lake within the city limits, part of the emerald necklace of BeltLine parks, and that no people will be allowed to enjoy it.

Mark Pendergrast is an Atlanta native and author of City on the Verge: Atlanta and the Fight for America’s Urban Future.  He lives in Vermont and can be reached through cityontheverge.com or markpendergrast.com.