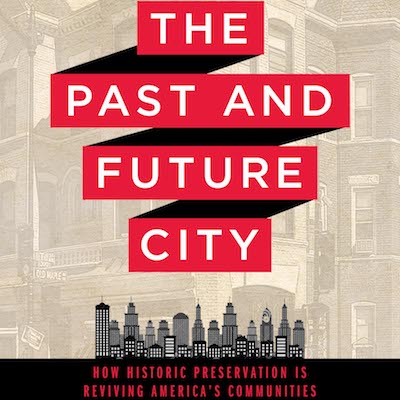 Book Review: The Past and Future City

In her seminal book, The Death and Life of Great American Cities, published in 1961, Jane Jacobs delineates what was happening to the American city and how we can reverse the threatening ills of urban renewal and highway construction.

She wrote at the time that “cities need old buildings so badly, it is probably impossible for vigorous streets and districts to grow without them.”1 Evoking the spirit of Jacobs, in her recent book The Past and Future City: How Historic Preservation is Reviving America’s Communities, Stephanie Meeks, the current president of the National Trust for Historic Preservation (with Kevin C. Murphy), guides the reader through the current status of historic preservation in cities of the United States. Meeks explains not only why we should preserve our historic places but also enumerates the specific tools at the disposal of both the private and public sectors to further incentivize preservation efforts.In the course of her own discussion of the preservation of cities, Meeks backs her ideas up with ample statistical information that is currently being generated by the Preservation Green Lab, the research arm of the National Trust for Historic Preservation, as well as other sources, to prove that historic preservation not only makes sense economically, but it is an essential component of urban revitalization.

Ultimately, Meeks makes an accessible and powerful case for the widespread use of historic preservation in cities nationwide. Meeks covers essential considerations in historic preservation including the need for assistance to diverse communities, concerns over gentrification and displacement of long-time residents, and compares the carbon footprint of preservation versus that of new construction. The City of Atlanta would do well to attend to these insights and put these ideas into practice.Published in 2016, the fiftieth anniversary of the National Historic Preservation Act, Meeks’ text lays the foundation for current preservation efforts by describing the early efforts of Jacobs and others, and the seminal demolition of Penn Station in New York in 1963 as a turning point for the movement to preserve our cities. Meeks reviews successful preservation efforts from cities all over the country including Washington, DC, San Francisco, Seattle and New York, though her survey of such efforts does not include Atlanta until she refers to the rehabilitation of the historic Sears Roebuck and Company building into Ponce City Market well into chapter 4. She does, however, detail the good works that are going on in nearby middle Georgia by the Historic Macon Foundation (HMF) in the Beall’s Hill neighborhood of Macon. The work of HMF is a great example of a public/private/philanthropic partnership that is revitalizing a community that had seen prolonged disinvestment. Atlanta could take a lesson from our southern neighbor which has created affordable housing by utilizing revolving funds, loans from non-profit organizations, historic preservation tax credits, and creative financing to create a program that rehabilitates existing abandoned structures and builds compatible new construction on empty land. The results have been impressive, affecting over 500 homes, increasing tax revenue to the city by over $1 million; all without displacing current residents by working with the city to freeze their property taxes.

In chapter 3, “Making It Work for Your City: Unleashing the Power and Potential of Historic Fabric,” Meeks gets down to the nitty-gritty of how preservation tools are used around the country to boost urban rebirth. She describes a step-by-step approach, making data-driven decisions, removing regulatory obstacles, encouraging compatible new construction, making streets pedestrian-friendly, and utilizing the historic tax credits and property tax freezes that already exist to incentivize rehabilitation. The City of Atlanta, under Tim Keane, the commissioner of the Department of City Planning, is working towards revamping the zoning code to a “form-based” system that would use existing context as opposed to use to make decisions on zoning. This change will promote mixed-use neighborhoods, walkability, and contextual development. Meeks emphasizes the use of the federal Rehabilitation Investment Tax Credit (RITC) as a cornerstone of commercial historic district revitalization across the United States.

The RITC is a 20 percent tax credit available to owners of income-producing property that is listed in the National Register of Historic Places and is rehabilitated to federal standards. This is where Atlanta and Georgia have already taken advantage of revitalization efforts. In addition to the federal credits for income-producing property which Meeks describes in her text, the State of Georgia also offers tax credits for residential and commercial properties as well as an eight-year freeze on property tax assessments. According to Meeks, from 2001 to 2013 Georgia has averaged $76 million in federal tax credits on a total of 350 projects, which resulted in creating over 7,000 jobs. The most striking example of this in Atlanta is Ponce City Market. Meeks relates the story of the rehabilitation and adaptive use of almost two million square feet of space in the former Sears-Roebuck distribution center by Jamestown Properties into the current mixed use facility. Jamestown was able to receive $35 million in state and federal historic tax credits. These mega-projects certainly stand out, but the Investment Tax Credit has also been used for hundreds of smaller “mom and pop” projects all over the metro area. Over the last four years in Metro Atlanta, historic preservation projects that utilize the state and federal tax incentives have generated over $425 million in economic development activity, according to state records.

The need for diversity in the representation of our historic resources is an important theme in the book and a particularly relevant topic to consider in the context of Atlanta. Our cities are places that have been and are populated with citizens from diverse backgrounds who have built places that reflect that diversity. Meeks calls for our diverse American landscape to tell a broad story of our history, the good and the bad. On the state level, Georgia has indeed been a national leader in telling those stories. The Georgia Historic Preservation Division has emphasized the importance of preserving and interpreting African American historic resources for over thirty years. Among its many accomplishments, the African American Historic Preservation Network has led the nation in the preservation of Rosenwald Schools in Georgia.2 These schools where the result of a partnership begun between Julius Rosenwald, president of Sears, Roebuck and Company and Booker T. Washington of the Tuskeegee Institute in 1912 and continued with others after Washington’s death in 1915. In all this collaboration built nearly 5,000 schools for African American children throughout the South, and 242 schools here in Georgia by 1932. These schools became the primary education facilities for Georgia’s black population until desegregation. Currently, over fifty of these buildings have been located still standing in Georgia.

But the city of Atlanta has struggled to keep pace with the state. Places like Paschal’s Restaurant and Motor Hotel, the Atlanta Life Insurance Company buildings on Auburn Avenue, Gaines and Fountain Halls at the Atlanta University Center, the Herndon Home and the Sweet Auburn Corridor, are all essential to telling the story of the African American experience in Atlanta. These sites have continued to deteriorate and still await rehabilitation. With the help of the federal government and the Historic District Development Corporation, the blocks around the birth home of Dr. Martin Luther King, Jr. have been revitalized. Likewise, the residents of Collier Heights, the first African American suburban development in the nation, have listed their neighborhood in the National Register of Historic Places and have been protected by city historic district zoning, but there is much work to be done. Recently, the National Trust for Historic Preservation has instituted a new African American Cultural Heritage Action Fund, which is designed to provide grant funds to assist communities in saving these kinds of resources and can provide a new avenue for Atlanta’s preservation efforts.

Elsewhere in the book, Meeks takes on the perception that preservation leads to gentrification, displacement of long-time residents, and the inability to create affordability in historic district housing. There is no doubt that the preservation and protection of historic districts can lead to residents being taxed out of their homes. Meeks uses the High Line redevelopment in New York as the poster child for such preservation-based gentrification. On the surface this project has taken an unused elevated railroad trestle and turned it into a resident and tourist destination (think the Atlanta BeltLine on steroids). Unfortunately, it has also led to significant displacement of residents and an influx of luxury shops and apartments. Atlanta can learn from other communities that have experienced such displacement as we confront our own problems. Gentrification is not necessarily a negative for older residents. Everyone wants their property to accrue in value, but the increased tax burden is what can lead to displacement. Atlanta might institute creative solutions to reduce the tax burden on longtime residents so that they can afford to stay in their homes if they want to. Some options in this vein include historic district zoning, grant programs aimed to assist long-time property owners, and a property tax freeze but the city government needs to take action.

From a sustainability point of view, in her final chapter, Meeks makes the environmental case for saving historic buildings and their embodied energy. As climate change continues we need to conserve our resources. Historical preservation is one way to do so. Old neighborhoods are ideal for walkability, a diversity of uses, are already connected to the power and water grid, and are closer to central city jobs. Real estate is all about location, and more Atlantans are making the decision to live closer to where they want to work, eat, play, and be entertained. These neighborhoods can be revitalized without throwing away buildings into our landfills. As architect Carl Elefante argues, “the greenest building is one that is already built.”3Meeks makes a strong case for the preservation of our historic built environment, backing her beliefs up with statistical information and a wealth of examples from around the country. She maintains that the real revitalization of cities cannot happen without it. For those who are truly interested in answering the array of challenges that face Atlanta over the next decade in regards to its built environment, Meeks supplies food for thought for at least part of the solution.

Richard Laub is a senior lecturer and director of the Heritage Preservation Master’s Degree Program in the Department of History at Georgia State University.