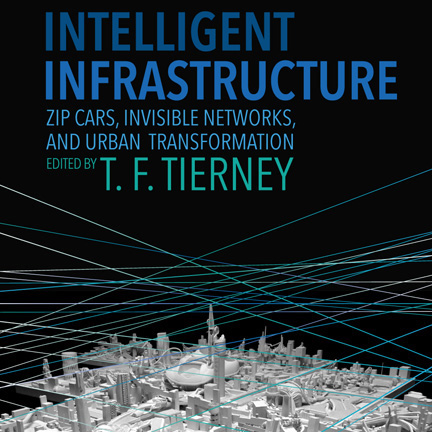 Atlanta, like many cities around the world, is vying to become a “smart city.”

Its main focus to date has been around efforts to deploy intelligent infrastructure along North Avenue to make it a smart corridor.1 But as Georgia Tech professor Jennifer Clark points out in her recent Atlanta Studies post, smart cities are about much more than just autonomous vehicles.2 Although none of the essays in the new edited collection Intelligent Infrastructure: Zip Cars, Invisible Networks, and Urban Transformation discuss Atlanta, many of the case studies and findings presented are directly relevant to the city’s current development efforts and could enrich the ongoing conversations about how to make Atlanta “smarter,” beyond the issue of autonomous vehicles.

Intelligent Infrastructure urges us to take a refreshingly humanist approach to recent technological advances in urban transportation infrastructures, including the Internet of Things (IoT), artificial intelligence (AI), and autonomous vehicles, among others. Intelligent infrastructure is defined as “not only technological artifacts, but also social relations, such as the open source movement, the sharing economy, crowdsourcing, and other networked participatory practices – all of which have their own generative potential” (87).  The volume’s primary objective, according to its editor T. F. Tierney, is “to focus on one key concept, connection, as it relates to the impact of information and communication technologies (ICTs) on urban infrastructure, particularly mobility systems” (3).  In her introduction, Tierney argues that “the future of urbanism depends on conceptualizing infrastructure not as a means of optimization, data collection, or control, but as a connective tissue of social relations binding a city together” (25). However, while Tierney makes a clear effort to emphasize the importance of considering social equity issues alongside the commonly discussed issues of optimization, efficiency, and interoperability, it is unclear whether all of the volume’s contributors share Tierney’s concern for the social aspects of intelligent transportation infrastructure.

The volume is organized into three parts – the first focuses on “soft systems,” or those that consider the broader social contexts in which infrastructures are designed and used; the second looks at “mashed systems,” described as the evolving relationships that are enabled between humans and things; and the third hones in on “hard systems,” specifically the impact of new technologies on the built environment and the people in that environment.

Several themes emerge throughout the volume. The first is that intelligent infrastructure in many cases is leading cities away from centralized transportation hubs and toward more decentralized, user-driven nodes. In chapter 6, Carlo Ratti writes about his vision for ubiquitous multimodality fueled by real-time information and a plethora of affordable transportation options. Later in the volume Alfredo Brillembourf and Hubert Klumpber explore the use of decentralized, adaptable transportation hubs in informal communities in Venezuela. These two examples provide starkly contrasting views of how intelligent infrastructure can be used to provide more flexible transportation options in various social contexts. In Atlanta we see this happening with ridesharing services like Uber and Lyft, as well as the bikeshare Relay Bike stations that have popped up around town in the last year.3

The second theme, somewhat connected to the first, is that the best intelligent infrastructure is place-based. For example, in chapter 2, Anthony Townsend suggests the importance of transportation systems using situated software, meaning software that is designed for a specific community by the community members themselves. And as Brillembourf and Klumpber note in chapter 10, “ultimately, the success of ‘intelligent’ infrastructure in informal cities is dependent upon how well it meets case-specific needs, how much it involves the on-the-ground community, how easily adaptable it is (to the constant and rapid growth seen in informal environments), and how well it can multitask” (185). In the case of Atlanta, this requires engaging with community members to not only determine what challenges are most pressing to them, but also to identify appropriate solutions.

The third theme, and, I would argue, the most important takeaway from the collection, is that intelligent infrastructure is not a panacea, and in the worst cases can even reinforce existing inequalities related to urban transportation networks and social mobility more broadly. In chapter 11, Chamee Yang dissects the paradox of urban mobility in South Korea, where, she argues, the government takes a dangerously deterministic approach to technology, which reifies the widely held belief that technology is a value-neutral addition to our daily lives in urban spaces. Tierney herself also points out the potential shortcomings of techno-deterministic approaches by highlighting the fact that the current conversation around smart cities (which encompasses intelligent infrastructure systems and practices) is being driven by large corporations that have a strong financial interest in propagating these smart new technologies and systems – regardless of their effectiveness or impact.

As this volume highlights, intelligent transportation infrastructure is increasingly seen as an essential component of the “smart city.” Atlanta, a city that has historically used transportation systems to divide communities and concentrate wealth, is now claiming to be a leader in the smart cities movement.4 This September the city launched the North Avenue Smart Corridor, a five-mile long smart test bed that runs east-west between Atlanta’s long neglected downtown and its affluent midtown neighborhood.5 According to Kirk Talbott, executive director of the city’s SmartATL initiative, the goal of the corridor is to find smart city solutions that can be used to improve public safety, mobility, and operational efficiency throughout the city.6

Earlier this year, however, amidst plans for the smart corridor launch, Atlanta suffered a series of massive transportation failures that brought national attention to the city’s infrastructure gaps. Most notably, in March a section of the I-85 interstate collapsed after a fire was ignited underneath one of its bridges. Then, in April, a segment of I-20 buckled due to an underground gas leak. In addition to highlighting the negative consequences of Atlanta’s historical development patterns,7 the frenzy that followed the I-85 bridge collapse revealed the multi-dimensional nature of infrastructural issues in our city.8 But rather than confronting the connections between Atlanta’s transportation infrastructure, the city’s rising income inequality,9 and persistent racial segregation,10 the conversations following the collapse revolved around character evaluations of a homeless man who was believed to have unknowingly started the fire. If Atlanta really intends to become a smart city, it needs to acknowledge the historical role that such transportation policies (and planning in general) – which were often in responses to previous technological developments like the automobile – have played in segregating the city by both race and income. By underinvesting in public transportation, the whole city has suffered from the lost economic and community growth that could have occurred were those communities connected to economic and educational centers.

Technology can certainly improve quality of life, such as the GPS technology that allows us to now move seamlessly through cities without fear of getting lost or missing a turn. It can, however, just as easily become part of private sector ploys to gain access to valuable data and boost profits without attention to the needs of the public.11 The essays in Intelligent Infrastructure importantly remind us to look not only at the technological, but also the social impacts of smart cities and intelligent infrastructure. As one of the contributors notes: “a city’s technological development plans clearly reflects the way in which the leaders and innovators conceive the social order” (196). The challenge for Atlanta as it now positions itself to become a “smart” city is thus to make sure its plans really do reflect the needs and desires of all of its citizens. While none of its contributors are writing in or about Atlanta, this volume contains many useful case studies and would be a worthwhile read for Atlanta-based transportation advocates, planners, engineers, technologists, and policy-makers who are interested in using transportation and technology to make meaningful connections among people, rather than just among the infrastructures themselves.