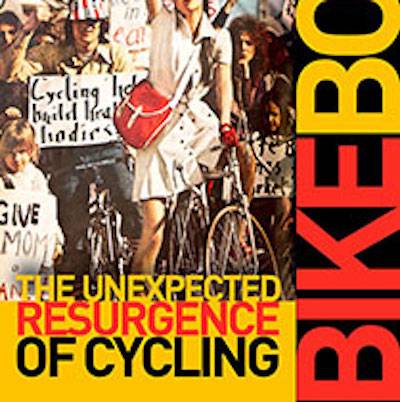 One of my favorites here in Atlanta was the 2011 Creative Loafing article entitled “Could Atlanta be new Amsterdam?”1 (Answer: probably not.) Spurred by the launch of a Georgia Tech bike share program, that article suggested the confluence of sustainability and economics was then leading more people to bike, and that elected officials should take note. But what’s behind the larger and seemingly non-stop waves of such coverage that Creative Loafing’s article was a part of? In Carlton Reid’s recent book, Bike Boom: The Unexpected Resurgence of Cycling, he takes on this tough to pin down topic and provides an enlightening perspective, if not always a cohesive one.

Reid asserts that media reports of bike booms are not unique to our era, but in fact come along every few years and such articles sometimes reflect the need for news more than they reflect new developments in cycling. In fact, he suggests that the last true “bike boom” took place back in the early seventies – many bike boom stories ago. And while I lost track of all the dips and spikes in the rates of bicycling Reid reports, Bike Boom is laden with fascinating data points. And it leads the reader to conclude that whether people bike ultimately depends on many factors, including the social/cultural atmosphere, the built environment, economic factors, and even the geopolitical world order.

One point early in Reid’s tome stuck with me in particular. Reid simply but instructively notes: “By acknowledging that there is no real boom we can better explore how to go out and create one” (xvii).  I’m as guilty as anyone of interpreting spikes in rates of biking (as measured by the American Community Survey data on commuting) in Atlanta as indicators that two wheels are taking off. And it’s hard not to when anecdotal evidence and your own two eyes back it up. In my early days at the Atlanta Bicycle Coalition – where I’m the Executive Director – I almost always recognized everyone on a bike during my ride to work. But these days, when I glance around at a red light, I often see people on bikes on all four corners, and recognize not a one. That’s the future we’re working towards at the Atlanta Bicycle Coalition. We envision a day when biking is fully integrated into Atlanta’s daily life, culture, and infrastructure. We’re working to enact that vision through our strategic plan.

But reading Bike Boom caused me to examine some of the conventional wisdom in the bike advocacy world, especially the often-cited, often-mocked concept from my favorite movie Field of Dreams: “If you build it, they will come.” Most bike organizations today are working from the premise that a connected network of safe bikeways will spark dramatic increases in biking, the Atlanta Bicycle Coalition included. This is based on the experiences of cities with good networks, and the micro experiences within our cities in places where a well-loved trail connects to a useful protected bike lane. In Atlanta, that’s the Eastside BeltLine to 10th Street. Automated bike counters in place on 10th Street show big increases in biking (225 percent more bicyclists from September 2013 and April 2017).

Reid uses a variety of example cities to strike down the Field of Dreams Theory, and even argues that bikeways alone don’t make for a world-class biking city. For example, in his final chapter “How the Dutch Really Got Their Cycleways.” Reid traces the history behind the country’s current robust cycling rates and networks, in the process dispelling some over-simplifications of their success that I found especially helpful. As Reid notes, “Dutch planners and engineers think diffuse networks, while too often we fixate on curb-protected cycleways, believing that’s the Dutch way” (208). He then gives the Dutch engineer’s checklist of “coherence, directness, safety, comfort, and attractiveness,” but ultimately concludes that “the real secret to the success of the Dutch cycle networks is not that they are all protected but rather that they are connected” (208).

In line with such insights, our goal at the Atlanta Bicycle Coalition is that everyone in the City of Atlanta lives within ½ mile of a network of connected bikeways. We’d like them to be protected as well-meaning there’s some kind of barrier between the bike lane and cars – but we recognize that the key to their effectiveness is that they connect. For most people who would bike if it were safe and convenient, a bike lane that ends suddenly is the equivalent of being dropped off on the highway without a car. Thus our ongoing Connecting the City campaign aims to build grassroots support for the kinds of infrastructure changes needed to make this goal of connectivity a reality.

Another bit of conventional wisdom of bike advocacy that Reid tackles head on is the belief that bicycle infrastructure automatically produces a “bike boom.” As he argues, even biking in cities with good networks can decline when the cultural relevance and excitement around biking lessens. For example, Davis, California, the undisputed “Bicycle Capital of the U.S.” has experienced a three-year decline in bike commute mode share, from 25 percent in 2013 to 17 percent in 2016.2 But according to Reid, the drop happened after free bus service was added and an influential local planner retired.3 So it seems stagnation, the relative power of local politicians and citizens, and sometimes plain old luck can all impact cycling’s popularity. Every place is a little different, and results may vary.

Here in Atlanta, we have a Chief Bicycle Officer in City Hall to manage projects, build out the network, and oversee the expansion of Relay Bike Share. Meanwhile the Atlanta Bicycle Coalition aims to bake biking into the city’s culture by producing Atlanta Streets Alive, an open streets initiative that temporarily closes streets to cars and empowers people and communities to move through the city by bike and foot. Likewise, the Atlanta Bicycle Coalition aims to help people integrate biking into their daily lives through programs by providing bike valets at festivals and sporting events, as well as helping small businesses get bike racks, and participating in the Atlanta Bike Challenge each October.

While we may know how many trips were taken on bike share, we still need to improve how we collect – and select – commuting data, particularly beyond work trips. Reid points out that the big-percentage increases in less advanced bike cities over the past decade represent relatively small numbers of people, and start from really small percentages of trips (to work) by bike. But he doesn’t account for how flawed relying on the trip to work data from the Census can be in sprawled regions like the cities of the American Sunbelt, where combined mode trips involving both transit and cycling are the norm. Such combined mode trips are not accounted for in the census, in which if you usually bike to transit to get to work, you’re considered a transit commuter, and not a bike commuter. Relying on such a metric can misrepresent the degree of cycling’s adoption in Atlanta and other Sunbelt cities as a transportation mode. According to American Association of State Highway and Transportation Officials (AASHTO), commuting to work makes up just 16 percent of all trips, and in a hot weather city, biking to work isn’t often the place people start biking for transportation.4 Instead, they are likely to try riding to the park or gym, or to socialize with friends.

That said, data on commuting is the most consistently collected data we have on biking. And the slightly inconvenient truth for bike boosters is that, despite the recent gains in biking to work, we’re still talking about marginal changes. However, even small percentage shifts from driving to another mode can result in less congestion. As Todd Litman notes, “traffic congestion is a non-linear function, meaning that a small reduction in urban-peak traffic volume can cause a proportionally larger reduction in delay.”5 The problem in cities – including Atlanta – is then striking the right balance between modes.

Resetting decades of disastrous car-centric planning thus comes down to how we balance our transportation portfolio. Just imagine for a moment how different our country would look if we had built a network of bikeways adjacent to the Interstate Highway System. Atlanta might resemble the trail network supported by the Atlanta Regional Commission’s Walk. Bike. Thrive! plan. This simple tweak of history would have shattered decades of car dependency that dictates our safety, health, and quality of life. In that world, perhaps Reid would instead be writing about how the United States is mired in the Dutch form of congestion: bikes everywhere, along with clean air and a healthy population.

But Reid calls on us to treat “[h]istory as a lesson, not a template.” (215). Moreover, he impels us to “Fight,” which for him, often means the unglamorous but necessary work of attending public meetings, making regular trips to city hall, and persuading the general public that cycling advocates are not here to take their cars away, but rather to expand their mobility options.

While have a long way to go to achieve true bike boom-type results in Atlanta, Reid’s research is encouraging in its conclusion that a mix of things matter. There’s no single strategy, but there is a single goal: a healthier, safer, and more livable future for all Atlantans. So we might not be there yet, but as WABE recently noted, “Atlanta Continues Its Journey To Become A More Bike-Friendly City.”