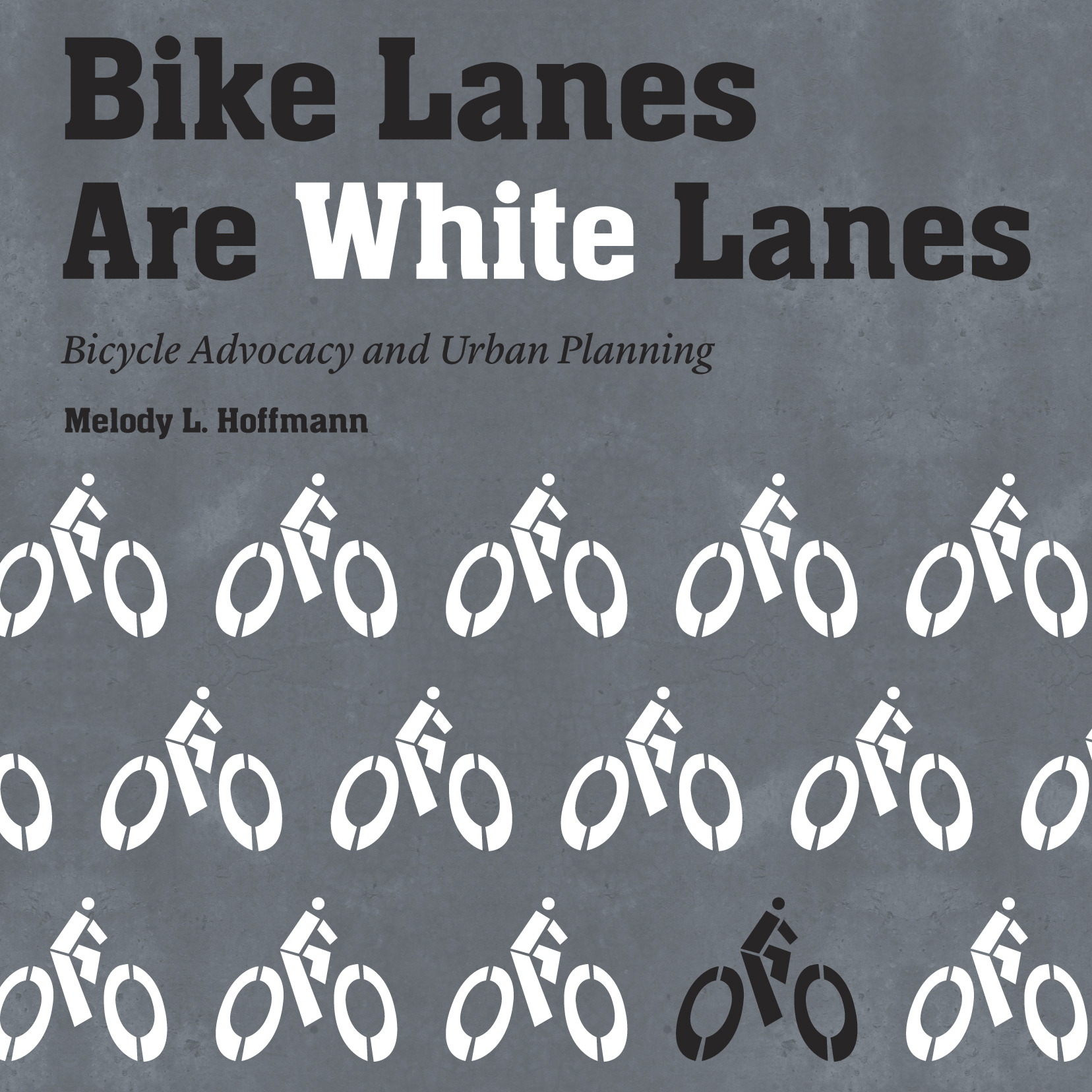 Whose Bike Lanes?: A Review of Bike Lanes Are White Lanes

Over the summer of 2017, the 1,000-foot-long, protected bike lane that stretched along Westview Drive in front of Shiloh Missionary Baptist Church in west Atlanta was removed after the church congregation complained.

In an ensuing op-ed, Bill Torpy captured the sentiment of many residents in the community who felt the bike lane messed up traffic flow and was a sign of gentrification as an amenity built for residents to come that was prioritized over long-standing community requests for things like sidewalks.1 There was a similar situation in Washington, DC, where congregants of churches in historically African American communities experiencing gentrification fought for the removal of bike lanes in 2013, 2015, and 2016.2 This contestation for space and representation in neighborhoods – particularly around cycling – is not new, as Melody Hoffman details in Bike Lanes Are White Lines: Bicycle Advocacy and Urban Planning. Hoffmann broadens the discussion on cycling, informed by her own work in bicycle advocacy, involvement in her Minneapolis bicycling community, and relationships aided by her feminist and activist work. As encapsulated by the book’s provocative title, Bike Lanes are White Lanes pin-points the roles race, economics, power, and privilege have played as main factors in traditional advocacy and urban planning which are too often left out of the discourse around cycling.

Hoffmann begins by addressing assumptions by advocates, urban planners, and black communities alike that “there’s no black people” in bicycling circles (1). The first chapter of Bike Lanes are White Lanes contextualizes the ridership of what she calls the “invisible cyclist[s],” who are “invisible because of when and where they bike” (15). She shows how the boundaries of the bicycle movement have been constructed to exclude riders of color, low income riders, immigrant riders, and any other cyclists who do not match the blueprint of what drives economic prosperity in cities (17). Hoffmann identifies the bicycle as a “rolling signifier … that can change depending on who is reading the sign” (5–6). Although “some people … see it as a progressive, earth-friendly tool,” Hoffman writes, “other people to see it as a marker of poverty or nuisance on the road” (6). This recognition of how the bicycle as an object is understood in various communities is important when engaging communities with bicycling and its amenities in advocacy and planning.

Writing on bicycle culture, Hoffman argues, is often one-dimensional, celebratory, and apolitical, effectively privileging dominant groups. This literature ignores “cultural and socioeconomic factors that impact what bicycling looks like in various spaces” (7). Hoffmann challenges this status quo, one-dimensional view with an intersectional look at the bicycle across space and time by relying and building on research that brings gender, social movements, history, advocacy, and technology into bicycle history. This perspective enables Hoffman to demonstrate how government funding, politics, and policies around cycling direct resources and development to benefit one group over others. Such resources and development are typically guided by the desires of the “creative class” who are “upwardly mobile,” young, white, and educated. Richard Florida’s economic development strategy exemplifies how this privileging of the “creative class” impacts bicycle advocacy. Florida’s approach does not address race or class, Hoffman argues, but leverages catering to a queer population to claim that it promotes culture and diversity (41).

The book features three case studies of bicycle advocacy in different communities where Hoffmann applies her carefully constructed framework to critique the process, practices, and outcomes at work. Throughout, Hoffman highlights how equity and inclusion have become a bottom-line statement for bicycling advocacy and planning.  For actual change to occur, Hoffman argues, white people “have to admit at the same time that racial, ethnic, and classed diversity is currently an issue” and this makes many uncomfortable (75).

Hoffman first examines the Riverwest 24, an annual, twenty-four-hour bike ride along a five-mile loop around Riverwest, a historically economically and racially diverse neighborhood in Milwaukee. While the neighborhood’s diversity counters the city’s reputation as being one of the most segregated in the United States, Hoffmann outlines how the event nonetheless “struggles with inclusion and the lack of diverse participants,” and suggests that the antidote is “intentional action on behalf of the leaders” to make the white riders’ interests and lifestyle no longer the focus of the event (55). Hoffman offers other suggestions for decentering whiteness as a way to counter the presence of race and class privileges embedded in the culture of bicycling (57). These include prioritizing people who do not identify as bicyclists, recruiting diverse organizers for their cultural knowledge, building relationships with diverse communities, and easing access to participation.

Hoffman’s second case study asks whose safety is prioritized in urban planning in the context of cycling in Portland, Oregon’s Albina neighborhood. She points to a “disjuncture [between] safety and history,” tied to inequality, where urban planning, public transportation, bicycle infrastructure, highway construction, and overall infrastructure-based displacement sit. Hoffmann connects the complexity of gentrification and persistent racialized conflicts over “new found concern” for “safety” improvements that tend to favor “urban pioneers” to cycling by highlighting how “hippies, punks, and artists” are increasingly replaced by “upwardly mobile bicyclists” as indicators of disastrous change (90). Portland’s history in Albania mirrors Atlanta’s Sweet Auburn where a highway displaced residents and businesses and now “neoliberal urbanism … ‘remakes the city physically and discursively.’” As a result, a “’different kind of city emerges—a city imagined by someone else, and not for the people who remain there’” (Thomas C. Pedroni, quoted on 91). Hoffmann suggests explicitly acknowledging past racist wrongs in mobility planning, employing thorough community engagement to hear the voices of those oppressed and normally silenced by such policies, and even creating “short-term and long-term projects to honor the people, businesses, and civic institutions” that once thrived in those areas that have been transformed by such racist transit policies (108).

In a third case study, centered in Minneapolis, Hoffman questions the conventional wisdom that bicycling is a “radical act” amidst “a total revolution in the way we get around” (R. T. Rybak, quoted on 113). Mobility, accessibility, and equity are important to decision makers and those they are planning for; whether it is the new creative class resident or the long-term, black, working-class resident. Hoffmann challenges the notion of riding a bicycle as a radical act by asking us to consider the impact of infrastructure on the residents who fall outside of those that the city woos. If cities seek young, white, highly mobile, and well-educated creative talent and are building for that demographic, what happens to those who fall outside of these narrow margins? Although “bicycling for transportation has been historically perceived as a radical act,” Hoffman argues that “bicycling politics are becoming realigned with neoliberal and economic interests. … The bicycle then becomes a rolling signifier of environmental friendliness and bourgeois leisure, having little to do with progressive bicycle politics, such as increased mobility for all people regardless of class position” (113–4). To ensure that planning and mobility advocacy has a focus on all people, an understanding that everything is “experienced in gendered, raced, regional, and classed ways that ensure its benefits are distributed unequally” is imperative (119). The example of Minneapolis helps Hoffman convey how relationships are the key ingredient for creating a bicycle culture that is responsive to everyone in the community. Or, as Karen Overton, founder of Recycle-a-Bicycle, now part of Bike New York, in New York City notes to Hoffman: “It’s finding out what issue a community is facing and determining together whether bicycling is a solution, and, if so, working together to make everyone feel like the project design is safe and mutually beneficial to everyone involved” (154). Anthony Taylor of the Minneapolis-based Major Taylor Bicycling Club goes even further, suggesting to Hoffman that, “we need to be working through initiatives that are genuinely created by, owned by, and reflect the culture and philosophy and mindset and vision of the communities we’re working in” (154). Echoing Taylor, Hoffman concludes that “the dominant approach to bicycling” centering the white middle class “will not necessarily resonate with other communities, but outsiders cannot necessarily control the approach that will resonate” (154).

Here in Atlanta, where policies around bicycling, such as the controversial plan near Shiloh Missionary Baptist Church, mirror and exacerbate a long history of discriminatory planning, the themes of Bike Lanes Are White Lanes seem all too familiar. In The Culture of Property: Race, Class, and Housing Landscapes in Atlanta, 1880–1950, LeeAnn Lands shows how systemic issues of racism, classism, and displacement were central in policies, practices, and design of Atlanta in the early twentieth century.3 Due in part to those policies, Atlanta is now known as the most inequitable city in the United States, where “high-income earning households in the city earned more than 17.5 times their low-income counterparts in 2014,” as reported by the Brookings Institution.4 Like Atlanta, many of the most inequitable cities have embraced bicycling in order to break the cycle of inequality. Planners in such cities, who are often themselves members of the privileged creative class, must take Hoffman’s discussion seriously and embrace discomfort, as they grow to understand whiteness and its role in urban planning and reckon fully with how conventional cycling policy impacts non-white communities. Planners in Atlanta and beyond must practice and advocate in light of realities of the most vulnerable and must “build common cause for safe streets that includes fears of racial discrimination” and gender-based harassment and allow all communities to determine the priority of mobility issues for themselves (156).

Community organizations can play a role in educating policy makers about the discriminatory results of cycling policies. Civil Bikes, a social impact organization I began in Atlanta in 2013 sits at the intersection of bicycle advocacy, history, culture, and place. Our bicycle tours and events upholds the voices of Black, immigrant, indigenous, women, queer, and other people of color in the city.5 We demonstrate how “racist attitudes … historically shaped” the planning of Atlanta and its transportation system, and the injustices that followed; economic, environmental, safety, are all written in the landscape and are identified through story. Our signature tour is based in Sweet Auburn, for generations the home of Black Atlanta, seat of the Civil Rights movement in Atlanta, and home to Martin Luther King, Jr., which was upended by the construction of the I-75/I-85 Downtown Connector that cut through the neighborhood during urban renewal Since we began offering this tour six years ago, the neighborhood has undergone another transformation. It now oozes the kinds of amenities desirable to the creative class: foodie culture, bars, an active night life, and accessibility to the Eastside Beltline. Yet the nature of these transformations fail “to take into account the multiple identities that make up the complete fabric of the community.”6 To create a place where the needs and safety of all residents are equitably prioritized, not just those of residents that are deemed desirable, requires that histories such as those we tell through Civil Bikes tours and considerations such as those raised by Hoffman be fully embraced when planning a city and its transportation structure.

This work is licensed under a Creative Commons Attribution-NonCommercial-NoDerivatives 4.0 International License. Attribution must provide author name, article title, Atlanta Studies, date of publication, and a link to this page. Note that this license applies only to the text of the article, not to media used here by permission of other parties.

Nedra Deadwyler is the owner and founder of Civil Bikes (2013) and was a Safety Education program manager at Georgia Bikes from 2015 to June 2019. She was a Fellow at the Center for Civic Innovation (CCI) in 2016-2017 and is now in the midst of a residency there. She is also a Licensed Master of Social Work (New York University, 2001).