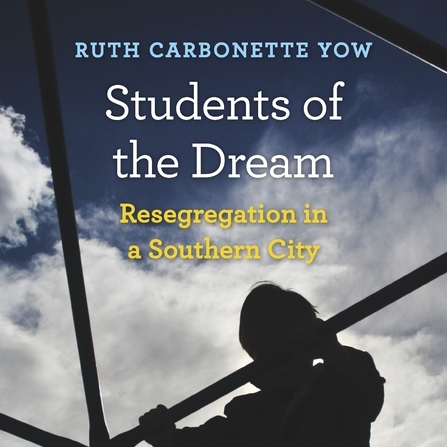 Book Review: Students of the Dream

The title of Ruth Carbonette Yow’s new book, Students of the Dream, invokes the work of Georgia author and advocate Lillian E. Smith, and her famous indictment of the social and psychological effects of racism in Killers of the Dream.

In Smith’s work, the titular “dream” references humankind’s struggle for freedom and justice, but, like a dream, its end remains nebulous. Yow’s “dream,” in contrast, is grounded in the temporal arc of American history as related to public schools and civil rights. Her “ethnographic history” traces the desegregation of southern schools in the late 1960s–1980s before examining the current re-stratification of public education. She also foregrounds the future of integrated schools, focusing on a group of “new integrators,” Latino students, whose livelihoods are at stake as another dream hangs in the balance. Like Smith, Yow has a clear sense of the work this book must do in the world – namely, spark creative solutions to arrest and reverse the ongoing resegregation of public schools. Undoing resegregation, she argues, is imperative for the health and welfare of our communities and youngest citizens, broadly defined. Her work thus offers important context and textured analysis that can inform these solutions. She charts change over time in education policy since Brown v. Board of Education, from “desegregation’s once-cluttered negotiating table” of consolidation, bussing, and redistricting to the ascent of neoliberal education “reforms” of school choice and policies (authored by the Bush and Obama administrations, and continued and intensified today) that prioritize test scores as measures of achievement and that frame students as both consumers of education and the “human capital” that schools produce (151, 139). Yow’s analysis is a nuanced portrait of the effects of these changes in one district – Marietta City Schools – and its populace of former and current students, parents, and school officials.

This focus on Marietta, Georgia, provides a startling look at the spread of “global neoliberalism in a local place” (123). Marietta “mirrors our national struggle over integration’s promises and paradoxes,” Yow writes, because it exemplifies the oft-ignored “expansion of resegregation from large cities to into American suburbs” with their “small, deeply rooted districts . . . unlikely to ever join with larger metropolitan systems” (14). That spread is attended by a specific discourse, which Yow uses as an entry point into weighing past experience with contemporary realities of desegregated schooling. For example, she confronts head-on the avowed commitment to “colorblindness” as part of the rhetoric of modern schooling. As Yow shows through oral histories with former and current students, the concept of and commitment to colorblindness at Marietta High School (MHS) was forged at Northcutt Stadium, home of the MHS Blue Devils. Football, and athletics generally (at least to some degree) offered camaraderie for early integrators – those African Americans who came in the late 1960s and early 1970s – and continue to do so for the new integrators, Latino students. Yow uses her interviews to limn the meaning of colorblindness and show that while students had very real experiences that they described as transcending the bounds of race and class, “that color- and class-blindness had little traction off the field, where race and poverty starkly determined the destinies of residents” (20). From the outset, desegregation was a fragile undertaking that required the crucial forging of shared identity; athletics offered both possibilities and limitations as a setting for cross-racial community formation.

Analyzing and unpacking the coded language of school policy is essential to understanding it. Yow pulls apart the (il)logic behind and effects of school choice and scholastic tracking; both, she argues, perpetuate school resegregation. Marietta, like other districts in the South, embraced school choice in the 1960s when a private school movement attempted to subvert the Brown ruling and channel white students away from integrated school systems. The early “architects” of school choice rhetoric were, Yow notes, “crafting a conservative ideology oriented toward future battles over the relationship between individual rights and the collective good” (42). Today, school choice manifests in Marietta via an “open enrollment” period for elementary schools (begun in 2007), in which parents from all neighborhoods choose where their children will attend (but only if there is room). The result has been the accretion of high-income, white students in one school, West Side Elementary, reinforcing homogeneity of class and race among schoolchildren. In an age with so much emphasis on individual choice in education, Yow shows, public school systems must compete to keep affluent students and their families in desk seats and in districts.

Allowing parents to steer their children away from neighborhood schools and into those of their choice, Yow notes, can harden lines of stratification, as can the internal tracking programs that public schools use to stop talented students from leaving for the elite scholastics promised by private ones. The International Baccalaureate program is MHS’s most recent iteration of such tracking efforts; this curriculum is a relatively new option among Georgia public schools, an addition to and sometimes replacement of the Technical Education/College Prep/College Prep Advanced/Advanced Placement schema that defined my own education in Rome City Schools in the 1990s. As one retired teacher suggests to Yow, the IB program, “was brought into existence in Marietta to stop white flight” (87). Though ostensibly based on academic merit, the numbers suggest that the program is “still a kind fortress” for whiteness (105). In the rising number of students of color in IB classes, however, Yow see an opportunity for transforming, and de-tracking, MHS courses. Drawing upon examples from other schools districts, she explains how a commitment to educational equality and the implementation of robust scholastic support systems can lead to greater racial and class parity within the school curriculum.

To be clear, Yow does not vilify individual administrators or teachers in this work. Rather, she takes a wide-angle approach, and contextualizes the underlying issues (poverty, urban renewal, entrenched ideology) that go well beyond the actions of individual public school administrators in buttressing the district’s resegregation. But at the same time she is certainly issuing a challenge – that we each must ward against the erosion of support for public schools through progressive policy.

In Yow’s account, public education policy and practice and the ways we define community reinforce and shape each other. Yow makes clear that our current political obsession with immigration shapes the experiences of the growing body of Latino students, particularly undocumented students (at MHS an estimated 90 percent of Latino students are undocumented) (122). She offers a splendid chapter charting, through the voices of Latino students themselves, the difficulties faced by children of immigrants, an especially important intervention when their experience – “transient” in official parlance – is defined for them, and when the places central to their lives (the Franklin Road corridor in Marietta) are maligned by those who don’t live there. Currently, MHS has no distinct support system or program for undocumented school children, although Yow sees models in other student organizations, such as Associación Hispánica! (AH!) and YELLS (Youth Empowerment through Learning, Leading, and Serving). Yow serves on the Board of YELLS and so has an intimate knowledge of the group’s work. These student-led organizations, she argues, challenge limited definitions of community as given by market-driven educational policy.

This book is often eloquent and always humane in its exploration of what is a highly emotional, political terrain. Yow’s work as an oral historian and ethnographer does much to humanize and texture a conversation too often reduced to charts and statistics. Although the oral history methodology she employs, which she has elaborated upon elsewhere, is not completely transparent in this book, it is clear that she is thoughtful about her presence in the interviews and is no mere ventriloquist for those who speak to and through her. There were places where I found the structure of content within chapters a bit confusing. For example, in chapter 3 on tracking programs, I could have used an explanation of how the IB program works early on, before the astute analysis of the program. Yet overall this is a book of substantial social value, which should be widely read by administrators, teachers, parents, the Georgia Department of Education staff, southern historians of the recent past, and history of education scholars. I look forward to assigning it to my Georgia History class this summer, which is largely made up of budding and current public school teachers. I’m particularly eager to see how those within the school system will respond, and perhaps be catalyzed, by the book. But in the end, Yow sees the new architects of change as the students themselves, those who have the most to lose or gain from transformation in pursuit of their dreams.