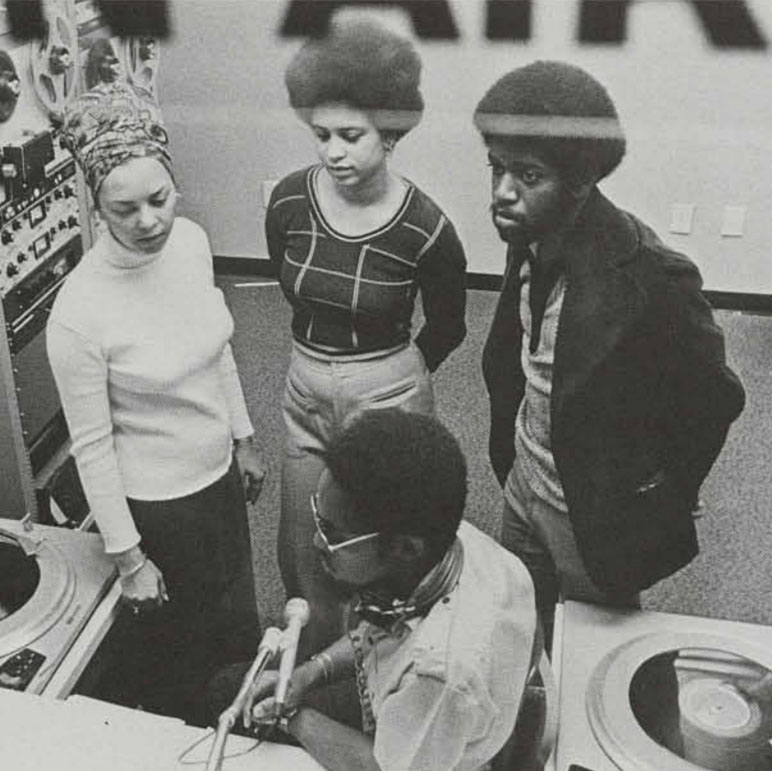 50 Watts from Noon til Midnight: The Making of WCLK

Under the direction of former Clark College President, Vivian Henderson, and former Director of Mass Communications, Charles Hobson, WCLK became the first black federally licensed educational FM station in Georgia. Transmitting from Clark College’s McPheeter’s-Dennis Hall, WCLK was an Atlanta public radio entity that educated, informed, and enlightened the community. Atlanta had previously been the home of WERD, the first black-owned radio station of any type in the United States. Purchased in 1949 by Atlanta University professor and banker, Jesse B. Blayton, WERD sought to serve black Atlantans, broadcasting at 1000 watts from the Prince Hall Masons Grand Lodge on Auburn Avenue. Notably, the station served as a public platform for Martin Luther King Jr., whose Southern Christian Leadership Conference (SCLC) was located in the same building. WERD was sold to white owners in 1968. When WCLK began transmitting from Clark College’s McPheeters-Dennis Hall, even at a mere fifty-four watts from noon until midnight, the station was restoring WERD’s legacy of creating a space operated by black Atlantans and for black voices on the city’s airwaves. Before long WCLK became an Atlanta institution in its own right; a bastion of jazz and soul music as unique art forms, and a voice for discussing concerns relevant to black Atlantans. Over the past forty years, WCLK has grown from a small college radio station covering just a few blocks to a major public radio station reaching over 2.5 million people in the greater Atlanta metropolitan area. Over that period, the station has survived coverage limitations, financial challenges, musical format transitions, listener petitions, and most recently, an age of transformational digital technology.

WCLK has been described as a jazz and soul cultural legacy both locally and globally. One of the missions of WCLK from its beginning has been to increase awareness of the significance of jazz music as an American art form. Over the years, the station has served as a vehicle for some of the world’s most talented, iconic, and independent jazz and soul musicians such as Roy Ayres, Donald Byrd and the Blackbyrds, and Miles Davis.

WCLK has also been an enormous influence within the city of Atlanta and its black community. It has been a training ground for students in all aspects of broadcast and public media services. Like WERD, long before social media, WCLK was an outlet for black community members and politicians in a city at the center of the civil rights movement. Former WCLK student news reporter, Stan Washington notes, “the station was a very valuable institution and the city embraced us. Our community affairs shows earned respect from politicians.” He further comments that WCLK was the outlet to constituents for black politicians.[/vc_column_text][vc_column_text]My documentary film project, 50 Watts from Noon ‘til Midnight: The Making of WCLK, seeks to offer a well-rounded portrait of this public radio station. The film’s framework situates the survival of the station across decades and throughout the transitioning of the academic environment that is the Atlanta University Center. Founded in 1869 as Clark University by the Friedman’s Aid Society of the Methodist Episcopal Church, Clark College was the nation’s first four-year liberal arts college to serve primarily African American students. In 1988, Clark College became Clark Atlanta University after consolidating with Atlanta University, the nation’s first institution to award graduate degrees to African Americans. WCLK has survived challenges it faced during these institutional shifts, including its relocation on the Atlanta University campus, and changes to its financial support from the university over the years. The station has also been challenged with maintaining momentum within the changing landscape of public radio into the twenty-first century. In efforts to maintain member-listeners and expand its reach, WCLK station managers revised station programming on many occasions throughout the years, yielding a loss of on-air talent and exposure to public petitions.

This first installment of my documentary film project is this short film, which covers the conception of WCLK by former Clark College President Vivian Henderson and features accounts of the station’s history as it grew from a small educational station to a major public radio station. President Henderson’s vision of WCLK was as a student training ground within the new Mass Communication Center in 1974, however the energy surrounding the station propelled it as a progressive agent for jazz music and its derivatives – jazz-oriented, neo soul, acid jazz, and funk jazz. Later in the 1970s WCLK outgrew its humble location in McPheeter’s Dennis Hall on Clark College’s campus and moved to the Mass Communication Center’s building. Throughout this documentary project, which will include not only this short film but also a feature-length film, the history of WCLK will unfold through interviews with station managers, station alumni, staff, iconic on-air talent, mainstream and independent jazz, funk, and soul artists, as well as dedicated member-listeners of the station. The feature film will continue to track the historical journey of the station through the 1980s when WCLK’s identity as a progressive agent was cemented, and into the 1990s when format changes threatened the trajectory of the station and featured shows by on-air talent began to transform and challenge the very definition of jazz music. The final feature film will also reveal the story of the survival of the station through public petitions and financial struggles, many of which revolved around conflict over the station’s embrace of traditional jazz vs. contemporary smooth jazz formats.

The Making of 50 Watts

As a music video producer in the 1990s, I first became aware of WCLK as an outlet for independent artists and their music – artists such as British soul singer, Omar, India Arie, Arrested Development, or the Fugees. However, it wasn’t until I became a full-time film faculty member in Clark Atlanta University’s Mass Media Arts Department that I appreciated what the station means to jazz and jazz-oriented artists and the station’s listeners. Since 2007 I have kept WCLK playing in my home continuously. It has become the soundtrack of my life, at times musically transporting me back to my childhood in the 1970s. It has also introduced me to alternative and new forms of jazz, jazz-oriented, and soul music by national and international music artists, and educated me via NPR-syndicated programming and educational community programming.

It was with this affinity for WCLK, as a faculty member and filmmaker, that I became interested in the history of the station. For years I had witnessed the station’s struggle to keep pace financially and technically within the evolving radio landscape, and I have often been amazed at the support by the community of this member-supported station, a true demonstration of democracy in action.

Early during my inquisition about the history of the station in 2009, I discovered that many of the staff and on-air talent I interviewed were also unaware of how the station began and why. I found myself wondering which music artists would not have found success without WCLK. I felt someone needed to document and reveal WCLK’s legacy and impact. Someone needed to ignite and fan the flames of passion about the station. I decided a documentary film would be the appropriate archive to cement the history of the station. It has been quite a journey researching and composing the film. I have had to depend on oral history as the foundation of the film, complemented by archival sources I have gathered piece-by-piece over the years from personal collections, archival black newspaper coverage of the station, and from Clark College’s yearbook collection.

In a noncommercial radio landscape in which musical formats are no longer revered but still appreciated, WCLK continues to evolve and transform much like jazz music itself. While there’s much we don’t know about the future of public radio today, WCLK more than just survives within the contemporary landscape – it thrives. And its history illuminates a long legacy that will live on as one of the most iconic and unique platforms to ever grace the airwaves here in Atlanta.