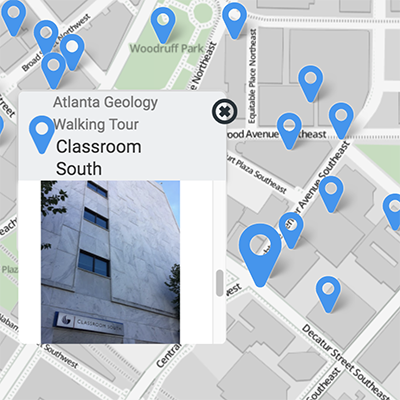 Atlanta is a city constructed: ever-changing and ever-new, historic structures are often unappreciated and ground down without hesitation.

Our skyline reaches high to pull itself out of a complicated and stymied history. The city is prone to forsake architectural styles, landmark buildings, and historical import in its efforts to economically reinvigorate and socially rebrand itself. In a time when we are acutely attuned to how we remember and memorialize the past through monuments in our cities, some might be concerned that Atlanta’s history could be bulldozed, along with its buildings, for better or worse. It comes as a surprising relief, then, that a simple walking tour exploring the rock materials of buildings in downtown Atlanta offers a different approach the city’s history.

The Geology Walking Tour was created in the 1960s by Bob Power, a former professor of geosciences at Georgia State University. While it has since been lightly revised by Hassan Ali Babaie, a current professor in GSU’s Geosciences Department, photocopies of the original typewriter-written document are still the prevailing guide for lower-division students in the department. Indeed, students still have copies of the original document in hand to guide them as they take a keener eye to the dolomite slabs and gneiss porticos that tower above them while walking the downtown streets that glue together GSU’s campus. Last year, the team at ATLMaps transcribed Power’s tour into this digital format.

The Geology Walking Tour starts you off at Classroom South, 95 Decatur Street SE, the one-time heart of GSU’s downtown Atlanta campus. From there it guides you up and down Peachtree, Pryor, Edgewood, and Marietta streets – slowly charting the blocks of downtown through a sort of on-the-ground cluster analysis – refusing to give us the simplest, most expeditiously routed directions that we are so accustomed to today through Waze or Siri. Instead, the tour asks us (its tourists) to focus on the minutia of the “specific sites of geological interest” on these downtown blocks, such as poured forms, counters, thermal cutting finishes, trims of stairways and vestibules. “Only the three commercial rock names [granite, limestone, and marble] will be used in the tour,” we are told in the introduction, “so that one may look at the rock samples and try to determine their true nature.” But make no mistake: the double-entendre of the material’s “true nature” becomes as much of a guide through these blocks as the typewritten tour. These old stones “encompass a much greater range” of not only earth material, but also, I’d argue, cultural meaning, than what may initially pass over the eye, as Power’s points out.

As I first took this tour, I found myself slowing down, looking up, examining details, and wandering into some of the impressive downtown structures. I ended up chatting with and asking questions to the concierges, janitors, and security guards in the foyers and lobbies – people whose job it is to take care of these buildings of geological interest. The custodians of these buildings illuminated a different sort of pride that these structures, these bones, of downtown were built with and still carry. I learned, for example, that the white marbles quarried in Alabama in the historic Hurt Building were intentionally crafted to be alongside the Breche Violet quarried in Italy and the Tavernelle marble from France, and I mused about the kind of statement – economic, aesthetic, political – an architect’s choice of material makes. And I learned that some of these buildings have been used differently through the decades, like the Federal Court of Appeals on Forsyth Street that was once the main US Post Office hub for the entire southeast region. Most importantly, at least for me, I learned that some of these sites, despite their renovations and repurposings, have had the same stewards throughout their decades of updates. When sought out, these people have stories about the history of the construction of the building that match the richness of the golden veins in its granite columns.

Translating Power’s original Geology Walking Tour for a digital platform may seem to undermine to the intrinsic aims of the tour: to slow down, consciously take a stroll through the fantastically unique campus of Georgia State University, and admire the unassuming grandeur of the metropolitan geology all around us. Then again, I realized as I re-walked this tour recently, the ATLMaps version increases the tour’s potential teaching value by delivering it through a platform accessible from any computer. During the process of translating and updating this tour for ATLMaps, I ultimately learned that sometimes all you have to do to (re)situate the city in its place and history is, quite literally, dig a bit deeper where you already are.