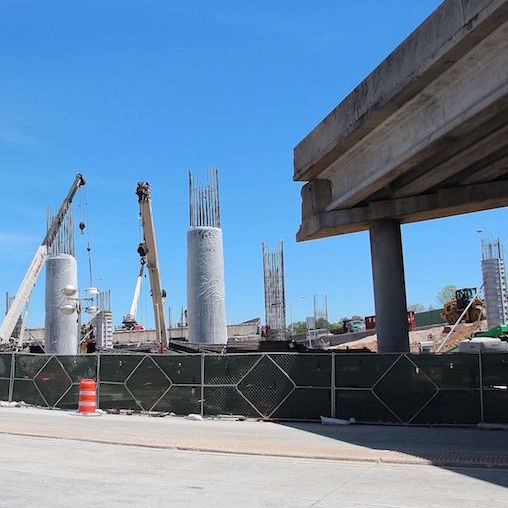 Re-Building a Bridge and Re-Examining Policies

On March 30, 2017, a city founded on transport that later rose from fiery ashes suddenly faced a fiery transportation crisis. An intense fire collapsed a section of I-85, one of the region’s major highways, leaving commuters stranded and the media in a flux of speechless hyperbole. Regional leaders, including Atlanta Mayor Kasim Reed and Georgia Department of Transportation Commissioner Russell McMurry, reacted by labeling the collapse “a crisis.” 1The stretch of I-85 where the bridge fell is regionally and nationally significant – it serves local commuters; regional and interstate truckers; as well as travelers destined for Florida’s beaches, North Carolina’s mountains, and all points in between. Atlantans are well aware of how this segment of the highway can affect travel times, and traffic data confirms its importance, as more than 257,000 vehicles traveled this segment of I-85 the Tuesday before its collapse. 2

While this segment of I-85 is undoubtedly critical to Atlanta-area transportation, every transportation network has critical nodes and links such as the Mississippi River’s bridges or New York City’s tunnels. Congestion at some of these nodes is largely unavoidable, whether due to geography or brief but intense spikes in demand. However, many of Atlanta’s transportation woes – seen before and after the collapse – have been exacerbated by a century of land use and transportation decisions that have resulted in sprawling land use patterns and a lack of network redundancy.

The Great Depression and Franklin Delano Roosevelt’s subsequent New Deal further accelerated the trend toward urban highways via policies that allocated federal dollars to plan and construct inner-city expressways. 3 In the 1930s, US roadway engineers traveled to Germany to observe the newly constructed Autobahn. The engineers observed that it connected urban areas but did not continue into their urban cores; however, the engineers decided not to integrate this concept into US highway design policy. 4 Imagine an Atlanta with no interstates inside the perimeter.  If it is hard to conjure this vision, look no further than European cities like Munich, Frankfurt, Paris, and Madrid.

Highways in these European cities provide inter-regional connectivity but stop at each city’s respective beltway. This policy preserves neighborhoods’ history and character, as well as the walkability and density needed for successful transit service. The lack of highways in the urban core also preserves valuable land for housing and other uses that many U.S. cities lost to highway right-of-way. In this regard, Atlanta is the rule and not the exception: from Boston to the Sun Belt, many U.S. cities have at least one interstate winding near their core. In fact, a quick Google Maps survey shows that cities like Dallas, Houston, and Los Angeles have multiple major highways – some with multiple “ring roads” – that snake through their cities.

One could argue that past land-use and transportation planning decisions have resulted in a lack of effective redundancy – by both route and mode of transport. That is, although known for its sprawl, Atlanta has fewer highways than many of its peer cities, and especially few highways that provide east-west connectivity.

Coupled with the region’s winding roads, this lack of redundancy is apparent even when all bridges are standing, as the absence of viable alternatives makes detours inefficient at best and non-existent at worst. This situation is especially consequential during rush hour when a crash may further impede traffic flow. From a land-use perspective, I would argue that the relative lack of highways is a positive. However, despite progress to expand MARTA along multiple corridors, metro Atlanta’s transit network currently lacks the expansive service area and, for some routes, the service frequency seen in cities like New York, Boston, and Chicago needed for mass transit to serve as a viable travel options for many of the region’s residents. 5 Furthermore, the region has yet to complete a network of bicycle friendly corridors at a scale seen in cities like Portland and Minneapolis, despite rapid local progress. 6 Yet, Atlanta is a city built on a second chance, and there are signs of lessons learned and positive momentum on multiple fronts.

A Transportation “Family” with Viable Alternatives

The region’s transportation agencies, including MARTA, Georgia Department of Transportation (GDOT), and Georgia Regional Transportation Authority (GRTA) quickly responded to the bridge collapse with unity and solutions. MARTA increased train frequencies during the week and on weekends and created a dashboard to notify commuters when park-and-ride lots become full to accommodate increased ridership.7 GDOT established incentives for the contractor to quickly repair the bridge and estimates it will be operational by mid–late May.8 In the meantime, GDOT adjusted signal timings along parallel corridors to improve traffic flow.9 GRTA re-routed affected bus routes, including some to nearby MARTA stations, to mitigate delays to the extent possible. 10 Keith Parker, MARTA’s General Manager, conveyed the agencies’ unity when he referred to the region’s transportation network as a “family” during a recent presentation to the Sandy Springs Perimeter Chamber of Commerce. 11

Given the influx of recent new transportation funding at the state 12 and regional levels, 13 accompanying projects, and positive momentum toward transit, bike infrastructure, and walkable neighborhoods, now is as opportune a time as any to educate policy and decision makers about the importance of understand land-use and transportation interactions. Moreover, when addressing traffic issues and designing future transportation policies for Atlanta, it is important to remember that in and of itself, traffic congestion is not indicative of a failing region, as a reduction in the movement of people and goods typically signals a lagging economy. 14 Picture top world-class cities: Paris, Tokyo, New York, Hong Kong.

These cities are all congested, but attempt to mitigate it with transit systems and policies that provide viable travel alternatives. The region’s potential for expanded transit options, 15 an expanding bike share program, 16 and other signs of progress are evidence that the metro region is beginning to see the value of a multitude of transport options.The I-85 bridge collapse was deeply unfortunate, but it may catalyze a more intense regional discussion of metro Atlanta’s transportation and land use priorities. The region has the opportunity to produce an enhanced suite of resilient and convenient transportation and commute options. For Atlanta has risen from fire before – it can surely do so again, this time with a renewed multimodal spirit.