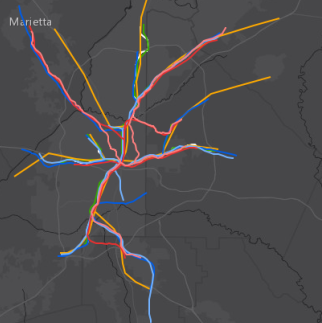 Expansion proposals have been voted down numerous times over the past five decades. However, several recent developments seem to signal that areas of the region once hostile to MARTA, may now welcome the transit agency. With MARTA expanding into Clayton County and the agency now resting on a more sound financial footing thanks to efforts by Keith Parker, MARTA appears to be on an upswing. As the concept of transit-oriented development gains momentum, more areas across metro Atlanta appear open to the benefits of transit, leading some to conclude that MARTA may expand further out across the region.

However, since MARTA’s 1960s inception it was planned to be a far-reaching, regional transit system. In each decade since MARTA’s beginnings, the agency proposed routes that would have made MARTA a truly expansive system. A number of these proposed MARTA routes can now be visualized in Tracing a History of Atlanta’s Public Transit, a digital project by a team of Student Innovation Fellowship (SIF) students working in the University Library’s CURVE.

This SIF team comprised of Amber J Boll, Nicole Ryerson, Shakib Ahmed, Alexandra Orrego, and Wasfi Momen gathered MARTA proposals from the library’s Planning Atlanta collection, located information from the Georgia Power streetcar system era, and collected material about the Atlanta Streetcar and the Atlanta Beltline. By tracing each proposed route, this team turned this information into geospatial data and created Tracing a History of Atlanta’s Public Transit, which clearly shows MARTA’s far-reaching intentions. As the state and the region begin to look more favorably on transit investment, this project aims to contribute to larger discussions taking place around the topic of public transit in Atlanta.