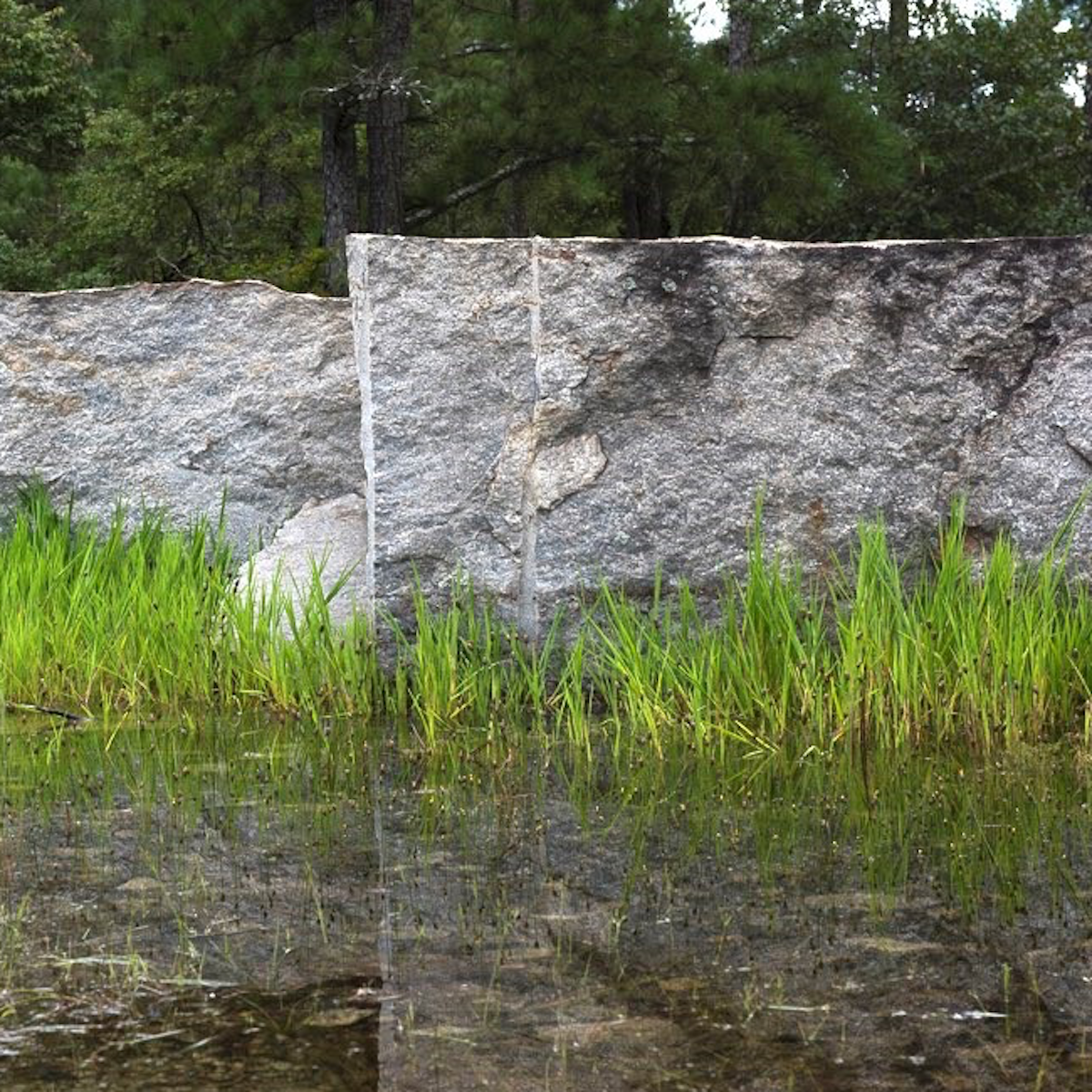 Reclaiming Nature and a Sense of Wonder: The Story of Arabia Mountain

There is something poetic and mysterious about this word, monadnock – pronounced “mə-NAD-nok.” Ask geologists and they will tell you that monadnock refers to a stone outcrop that rises out of the surrounding landscape. Think of it as a hard lump of earth that has been worn away but at a slower rate than its surroundings. The erosion leaves the rock bare and exposed. An entire ecosystem lives on it in pure symbiosis: Lichen, moss and tiny succulents that survive the heat of the summer and the footsteps of hikers . . . Nature’s brilliant scheme.

Arabia Mountain is one of Atlanta’s three monadnocks, along with Stone Mountain and Panola Mountain. All three lie east of the city. Arabia Mountain is certainly lesser known than Stone Mountain, a massive monolith with a controversial Confederate monument carved upon its stone face, which sits at the center of a recreational park and is a major tourist destination. The high number of visitors combined with lack of regulations have led to the deterioration of its natural habitat. Smaller than Stone Mountain, Panola Mountain is to be found further south, near the town of Stockbridge. Since gaining protection from the state in 1969, the park has become the epitome of a pristine natural area, the “crown jewel” of the three monadnocks that remain only publicly accessible through ranger-led guided tours.

Arabia Mountain stands somewhat in between – freely accessible yet ecologically preserved. At least for now. Since 2006, it has become protected under a National Heritage Area (NHA) designation, a federal status designated by Congress recognizing the historic, natural and cultural values of a place. The Arabia Mountain National Heritage Area includes the historically black community of Flat Rock, the monastery of the Holy Spirit led by Cistercian monks, and a non-profit animal rescue organization among other entities. This achievement is the result of tireless work done by a coalition of organizations that saw the growing encroachment of real estate development and fought to preserve the identity of the place.

A sense of place

Since moving to Atlanta in 2003, Arabia Mountain has been my special place: a place close enough that I could get to it within thirty minutes and complex enough that each of my visits was rewarded by a new discovery.

It is difficult to comprehend why a place feels special. Author and naturalist Janisse Ray offers this fitting definition: “I interpret sense of place as the experience of the human body in a landscape, the effect of the real environment on one’s emotional landscape, the intersection of the human heart with the natural world.”1

As a documentary landscape photographer, my connection to Arabia Mountain has been made mostly through a lens. It took me a long time to capture this place visually, and by that, I mean to understand the profound and complex reality of the place as more than that of an “out-of-this-world landscape” often associated with the outcroppings.

People are often preoccupied with the scenery, the visual beauty of a place. For me, however, the landscape is most enjoyable when I make sense of how it has come together, and how the genius loci – the spirit of a place – reveals itself. Arabia is an old – very old – mountain, more than 475 million years in the making, which is older than the Alps of my native France. How am I supposed to make sense of this?

Arabia Mountain is an ecological wonder. The Nature Conservancy of Georgia rated the area as one of the top 20 examples of this type of ecosystem globally.2 This place has experienced the settlement of Native Americans, African Americans and Europeans, and has been occupied for at least 6,000 to 8,000 years.3 Not surprisingly, it is the last industrial period that has left its deepest and darkest marks. What fascinates me is the visible manifestation of the fragility of its ecosystem in light of its industrial past. Nothing shows it better than these massive granite expanses, embedded with layers of history, yet having slowly been reclaimed by nature.

Like Stone Mountain, Arabia Mountain has been extensively quarried. Stone cutters especially appreciated Arabia Mountain, the oldest monadnock, for the unique quality of its granite (a mix of granite and gneiss referred as “migmatite”), known for its high density, colorfastness and attractive appearance. When it formed deep below the surface of the Earth, bands of light and dark minerals twisted to create distinctive swirls that broke the stone’s granular appearance, giving it the fitting name, “Tidal grey.”

Walls of granite still stand within the boundaries of Arabia Mountain, and with their sharp edges and open wounds created by dynamite bars and metal spikes, they testify to a time when granite was in high demand. The adjacent town of Lithonia – from the Greek etymology “place of rock” – was at one time the largest producer of diversified stone products in the United States, making everything from curb stones at the heyday of automobiles to soil conditioning products and even poultry grit.

The Lithonia and Arabia Mountain railroad opened around 1889 and greatly increased the industrial production and the transportation of granite to and from the area. For stone was not only extracted from the local quarries, but also shipped to Arabia Mountain from other places in the U.S. to be processed by the skilled stone cutters that the booming Lithonia quarrying businesses had attracted to the area – mostly immigrants from Scotland, Ireland, Wales, Scandinavia and Italy, as well as African-Americans who migrated to the area after the Civil War.

After World War II and the increasing use of cement as a building material, granite became less valued and production steadily declined. The Davidson family, who have owned and operated most of the Lithonia quarries for three generations, decided to donate part of their land. In 1972, DeKalb County Park system acquired 498 acres of Arabia Mountain through purchase and donations from Davidson Mineral Properties and the Coffey and Powell families. Twenty years later, it became the Davidson-Arabia Nature Preserve. With the exception of the occasional fire burst from the shooting range nearby, silence again reigns over the mountain.

Before gaining protection through a National Heritage Area (NHA) designation in 2006 and being turned into a desirable natural space, the site had gone through tough times. People used it as a racing car track, or an occasional landfill. At some point, it was known by locals as “the graffiti park.” Thomas Killian Smith, a retired U.S. forest service engineer and volunteer for the Arabia Mountain NHA, who took it upon himself to cover the graffiti with paint in the early 2000s. He did such a good job that it is difficult to spot his touch-ups. Even I, the photographer who spent hours scrutinizing the granite, had been fooled at times, only discovering the traces of his camouflage long after I had captured the scene. I like to think of these traces as an additional, yet ephemeral, human-made layer in the story of this place.

With time, nature has reclaimed its rights over Arabia Mountain. Moss and lichen thrive again on the bare rock, primitive and unpretentious, yet beautiful. They are named British soldiers and Usnea lichen, Spaghnum and Haircap moss. In total, 23 species of rare plants likely occur in the area. Two of those endemic to the granite outcropping belong to the federally endangered species list: the little amphianthus and the black-spored quillwort.

I can’t help but worry, however, about the future of the place. Graffiti still pops up here and there, and despite the newly-installed warning signs, hikers keep walking on the fragile solution pits where the beds of rare diamorpha smalli – tiny red two-inch tall succulents which are the mountain’s signature plant – survive miraculously. The park’s master plan calls for developing overnight camping areas and expanding hiking trails and river access points,4 which will ineluctably cause increasing stress on the ecosystem. There is a delicate balance between opening the park to the public at large – along with dog walkers, fashion shooters and yoga practitioners – and preserving its ecological integrity. No one knows this better than Robby Astrove, a park ranger who has found in Arabia Mountain a place to share his love for the outdoors. Despite the continuing signs of degradation, he remains a fierce optimist in the power of educating people to respect this “truly special place.”

At a time when the world is starting to grasp the urgency of an environmental crisis, I wonder if it is not only now but also here that we should focus our attention. How we care for our natural places – be it a tiny community garden, an old-growth forest or the planet Earth – speaks loudly about our frail relationship with the environment. And when people forget, landscapes remember. You just have to look at these granite outcrops.

They will tell you.

This work is licensed under a Creative Commons Attribution-NonCommercial-NoDerivatives 4.0 International License. Attribution must provide author name, article title, Atlanta Studies, date of publication, and a link to this page. Note that this license applies only to the text of the article as well as media provided by the author, not to media used here by permission of other entities.

Virginie Kippelen is a French-American documentary and fine art photographer based in Atlanta, Georgia. Her personal work explores the contemporary landscape in the widest sense, investigating themes which include the sense of place, the new forms of urbanism and the future of our environment. Her exhibit “Reclaimed by Nature: The Historic Davidson Quarries of Arabia Mountain” is currently on view at the DeKalb History Center, in the old courthouse on the Decatur square, until April 2020.