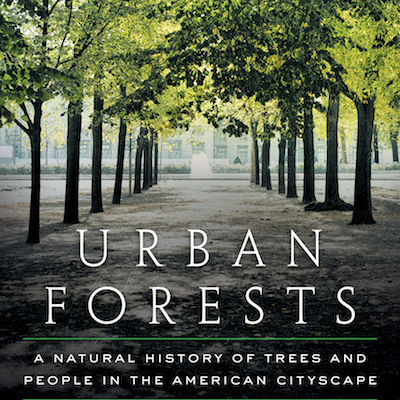 Seeing the Forest As Well As the Trees: A Review of Jill Jonnes’s Urban Forests

In her latest book, Urban Forests: A Natural History of Trees and People in the American Cityscape, author Jill Jonnes offers a 200-year history of tree planting in the United States, recounting the relationships Americans have had with their urban trees since the country’s founding.

Jonnes’ deeply researched narrative reads with an easy canter, designed for a broad audience. While it might be hard to imagine a narrative about city trees that connects an assortment of US presidents, their wives, the Morton Salt Company, a woman war correspondent in 1900, Ground Zero of 9/11, sex education for British women, and firewood, Jonnes’ book manages to do just that. As the discussion about Atlanta’s urban forest has taken on increased prominence recently,1 an understanding of the successes and mistakes of urban forestry’s past can help inform today’s conversation.

Though it is titled Urban Forests: A Natural History of Trees and People in the Urban Landscape, this book focuses on the story of urban forestry, not forests, and largely discusses socio-political ecosystems, not natural ones. Beginning with the eighteenth-century roots of tree planting in American cities, Jonnes discovers our nation’s Founding Fathers intertwined with early tree enthusiasts, then traces the branches of urban forestry’s main characters, dotting her narrative with glittering details, like leaves in the sun. Imperial-age horticulturalists collected and grew exotic species from around the globe and early urban tree-plantings were influenced largely by those designing gardens for prestige and entertainment rather than ecology, which was not yet understood. Utilitarian planting philosophies only emerged later in the nineteenth century after decades of rampant tree-cutting left many cities hot, barren, and prone to “clouds of unhealthful dust raised by horses, wandering cows, and pigs trudging through dried manure” (31). After leading us through the twentieth century’s tragic loss of trees destroyed by chestnut blight, Dutch elm disease, and other non-native insect and fungal pests imported from around the globe, Jonnes concludes by turning to today’s scientists and tree advocates and describing how late twentieth-century technologies have shaped the discussion about urban trees. For example, Jonnes explains that air-conditioning was the likely culprit for “de-necessitizing” urban trees, just at the moment when new developments in growing urban centers demanded more land. At the same time, recent advances in science and computer software have brought forth a flourish of new data, revealing a wealth of previously un-quantifiable tree values – from air-cleaning and stormwater mitigation to the health of the human body and mind. Jonnes also relates how, in recent decades, a holistic, nature-based approach to urban tree-planting is evolving to replace the horticultural and status-based concerns of the nineteenth century, as urban landscapes today are being designed as “retrofitted system[s] of green infrastructure that would also create parks and trails, new greenery and wetlands” (284).

From the book’s title, many readers may anticipate a discussion that includes more ecology and natural history and will find this volume wanting in such areas. For example, Jonnes does not explore the concept of forest ecology. In biological and ecological terms, just planting trees, especially non-native species in graded soils, does not create a forest. A forest is a biological complex in which thousands, if not millions, of species – trees, plants, animals, birds, insects, fungi – live in an interdependent, self-sustaining way, which, altogether, supports life in a particular location on the planet. While Jonnes makes little distinction between native and non-native trees, contemporary researchers, such as ecologist Douglas Tallamy, have made a clear case for the importance of native species. Tallamy notes that native oak trees host over 500 species of caterpillars, the mainstay diet for most of our birds, while Gingko trees host maybe one to four species at most.2 Though Jonnes admits she finds the term “urban forestry” to be “infelicitous” and a misnomer, this term is now broadly used, and in fact, many urban and suburban places do indeed hold true forests (164).

Because Jonnes’ story and sources are drawn mostly from a small wedge of older northeastern cities, such as Boston, New York, Philadelphia, Washington DC, and extending to Chicago (California cities are included late in the book) she largely overlooks the sprawling urban and suburban zones that now comprise a large part of the overall landscape and are often very different from the denser urban places she discusses where little is left of native forests or soils. For Jonnes there seems to be an underlying assumption that a city, by definition, cannot have a meaningful natural ecosystem because it was destroyed long ago. But cities like Atlanta stayed rural well into the twentieth century and only now face the density challenges other cities faced much earlier.

Such “late blooming” cities still hold a surprising volume of intact native forest. Several greenspaces in metro Atlanta were recently inducted into the Old Growth Forest Network due to their exceptional forest character.3 In such places, forest restoration, not tree planting, is becoming a goal for many urban forest managers and homeowners –the call is to prevent further degradation of existing trees and resources in their parks and backyards, rather than trying to rebuild an ecosystem from scratch, as is needed in older cities.

Although Urban Forests does not serve as a reference on the ecological values of forests found in urban or urbanizing places, it is nonetheless a meaningful compilation of the history of tree-planting in American cities and a welcomed addition to America’s green bookshelf. This book gives us much to think about, and it may raise more questions than it answers. In planning for the future of our urban forests, there is much value in understanding the path we’ve traveled, especially as we compare the fundamental differences between urban forests and planted trees. Jonnes’ work will aid us on our journey into the twenty-first century, when the relationship between humans and nature – in Atlanta and around the world – will test the fibers of civilization. Without a doubt, it is we, Jonnes’ readers, who will be responsible for writing the next chapters in the story of our urban forests.

Kathryn Kolb is a lifelong naturalist, fine art photographer and is the executive director of EcoAddendum, a non-profit profit organization dedicated to educating about natural landscapes in Atlanta, Georgia and the Southeast. She also serves as a consultant on tree ordinances, and works with CityintheForest.org, a non-profit coalition of metro Atlanta residents building support for better tree protections through education, awareness and efforts to improve tree ordinances and building practices.