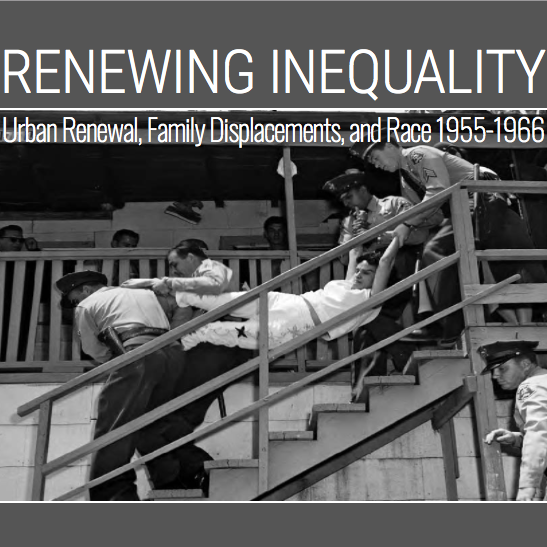 Reassessing Urban Renewal in Atlanta and Beyond: A Review of Renewing Inequality

1 As spectacular as the Jane Jacobs/Robert Moses battle and the Pruitt–Igoe mega-complex were, however, the federal urban renewal program, which lasted from 1949 to 1974, consisted of thousands of urban renewal projects that did not gain nearly as much attention and have largely remained outside the historical record. Local governments executed urban renewal projects in neighborhoods of large cities and small towns alike across the nation, displacing thousands of families, especially families of color, along the way. Renewing Inequality: Urban Renewal, Family Displacements, and Race, 1955–1966, a new digital project by the University of Richmond’s Digital Scholarship Lab, emphasizes these less extravagant urban renewal projects and reveals the underappreciated geographic reach of the federal program. The website shows that historical scholarship on urban renewal has perhaps too narrowly focused on large cities of the Northeast and the Midwest and that in doing so, the broader effects of this program throughout smaller cities and towns – including those in metropolitan regions and across the South – have largely been dismissed or left uninterrogated. Renewing Inequality also draws attention to the large numbers of displaced populations, not in anecdotal terms, but in actual figures, providing an important and humanizing portrayal of urban renewal statistical data.

Renewing Inequality stands alone in the scale of its depiction of urban renewal. While most scholarly works and digital projects on urban renewal have focused on either one city or offer selected multi-city comparisons,2 Renewing Inequality offers tremendous breadth, presenting data from essentially all cities and towns that participated in the federal urban renewal program. This project also brings together data on the racial characteristics of the displaced, the duration and the amount of funding received for a given project, and project boundaries by type, such as residential, commercial, and university, for hundreds of municipalities. Building upon Richmond’s Digital Scholarship Lab’s previous and equally impressive project, Mapping Inequality: Redlining in New Deal America, Renewing Inequality also incorporates the Home Owners’ Loan Corporation (HOLC) redlining grades as map overlays to illustrate that most urban renewal sites fell within areas previously redlined by HOLC. Finally, as a point of reference, this project also allows users to view 1960 census tract racial data.

Presenting so many different types of geospatial data and statistical information in one interface that also allows for an ease of interpretation is an exceedingly difficult task. But, Renewing Inequality largely succeeds in presenting this diverse set of information in a clear and relatively easy-to-understand interface. What emerges from this project’s herculean efforts to collect, standardize, and then offer a user-friendly mapping and visualization interface is the basis for a fuller understanding of the federal urban renewal program and its impacts. Renewing Inequality shines new light on how urban renewal significantly contributed to population displacement, especially among black and other minority populations. In particular, this project reveals a clear connection between HOLC’s racialized grading system – in which areas designated as “hazardous” and “definitely declining” consistently coincided with the presence of African Americans, Jews, or other minority groups – and the sites later selected for urban renewal projects. Moreover, the project’s visualizations make clear that the program’s reach went well beyond the nation’s largest cities to include many smaller municipalities throughout the nation’s metropolitan areas and even very small towns in rural locations.

By collating urban renewal data on projects throughout the nation, Renewing Inequality challenges prevailing interpretations of the program’s national geography. As the informative introductory essay that accompanies the project notes, previous works have tended to indicate that urban renewal’s “disproportionate impact was in the midwest (which executed about a thousand projects) and northeast (over 1,300 projects).” However, the data presented in this project “reveals that southeastern states pursued a significant number of projects as well (more than 750),” and that Atlanta, as well as other southeastern cities and towns, eagerly accepted urban renewal funds.3

By visualizing urban renewal on a metropolitan scale, this project also reveals that urban renewal projects in smaller towns could have a disproportionately devastating effect on black populations, a story absent in histories of urban renewal that focus on larger cities. For example, according to Renewing Inequality, College Park, a city of 23,469 in 1960, undertook three urban renewal projects. These three projects resulted in the displacement of 298 families, of which 95 percent were African American. These displacement figures recorded only families, not individuals (individuals who were not part of families were also deliberately not counted). Therefore, the exact number of people ultimately displaced is impossible to know with certainty as family sizes vary. However, according to the County and City Data Book, Georgia cities had on average about 3.5 people per household in 1960.8 Using that figure as a proxy for family size, we arrive at a speculative estimate of 990 black College Park residents displaced by urban renewal projects. Given that the black population of College Park in 1960 was 3,872, it is likely that almost a quarter of the city’s black residents were displaced. By comparison, while 89 percent of the 4,077 families displaced in Atlanta were black, Atlanta’s black population in 1960 was 186,695, so only an estimated 7 percent of the City of Atlanta’s black population was displaced by urban renewal projects.

This revelation also raises the seemingly paradoxical question of whether smaller towns and small cities bore a larger brunt of displacement than large cities on a per capita basis. Unfortunately, this intriguing question points to a shortcoming of the Renewing Inequality digital project: in its current iteration, Renewing Inequality does not allow users to download any data. Therefore, both the remarkable statistics that the project team pulled from Urban Renewal Project Characteristics and the Urban Renewal Directory and the urban renewal project boundary GIS data that was undoubtedly labor intensive to create are currently not available for further analysis by others. Hopefully, the University of Richmond’s Digital Scholarship Lab will make this data downloadable in the future just as they presently allow users to download HOLC shapefiles and other data from their Mapping Inequality project.

If any fault can be found with the project’s focus on displaced families, it is that it implies that only families or individuals were displaced. Perhaps due to the limited set of neighborhood/project characteristics reported in the Urban Renewal Project Characteristics and the Urban Renewal Directory, Renewing Inequality does not speak to the many displaced businesses nor does it provide any indication of the built environments that were altered. Although local governments that received urban renewal funding produced various surveys of proposed urban renewal areas such as these existing conditions and proposed redevelopment maps of Buttermilk Bottom in Atlanta, only some of the documented built environment information was reported in Urban Renewal Project Characteristics. However, one characteristic that was included in Urban Renewal Project Characteristics, but not included in Renewing Inequality is the condition of dwelling units. Nationwide and in metro Atlanta as many as 50 percent of the dwelling units in some urban renewal projects were assessed as being in standard condition. Such assessments raise important questions about the motives behind total clearance in many of these projects. Including figures on the condition of dwelling units would only strengthen this already illuminating project.

As Renewing Inequality clearly shows, urban renewal projects displaced many families of color. Equally important, but obscured in the federal statistics and, therefore also obscured in Renewing Inequality, are the many businesses in these communities which were also displaced by urban renewal projects. However, according to a locally produced report, from 1956 to 1966, the City of Atlanta’s urban renewal projects displaced 431 businesses.9 Many, if not the majority, of businesses displaced in Atlanta and across the nation were small, neighborhood serving establishments such as grocery stores, shoe stores, or hardware stores and also small industrial operations. For owners of these small businesses, the option to relocate was almost nonexistent in part due to zoning regulations. Thus, urban renewal ended many small businesses in black and older neighborhoods. In the process livelihoods were lost and mixed-use neighborhoods were erased from the urban landscape, but this consequence of displacement is not evident in Renewing Inequality.

With any digital project, decisions of what to include and exclude are difficult. The project team behind Renewing Inequality decided to draw attention to the large number of displaced families through maps, charts, and visualizations. This focus on displaced families powerfully shows the broad impact that urban renewal had on communities throughout the nation. The truly impressive data, maps, and visualizations contained in this project make it the most encompassing and singular urban renewal resource. The project’s demographic statistics also confirm the longstanding criticism of urban renewal as “negro removal.” As the project team notes, the data collected for Renewing Inequality clearly shows “how displacements had a much bigger effect upon communities of color.”10 Renewing Inequality also shatters the earlier notion that urban renewal was a program implemented mostly in medium and large sized cities.

Renewing Inequality is a significant contribution to the scholarly record of urban renewal and perhaps one of the most well-designed urban studies digital scholarship projects to date. If University of Richmond’s Digital Scholarship Lab would provide open access to its important statistics and GIS data behind the project, it will unquestionably lead to even more new and invigorating scholarship on these issues. Yet even in its present form, Renewing Inequality stands poised to stimulate engaging teaching and identify new sites for scholarship on race and space in twentieth century American history.