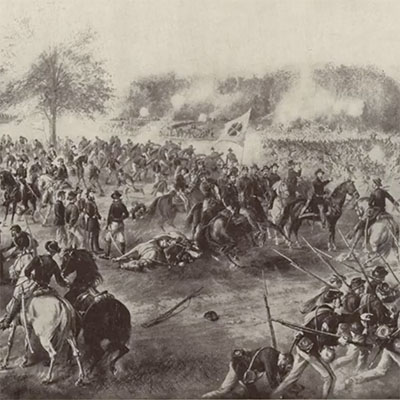 The Battle of Atlanta: Past vs. Present in ATLMaps

Maps are critical to the way that we understand history.

They are visual documents that remind us of past spaces, perspectives, and agendas. We employ maps in the study of history not only to understand how a location looked or how it felt, but also to understand the motivations of individuals, organizations, and empires through the eyes of a map’s creator.For Atlanta, maps are critical to understanding not only the city’s past, but its development and potential future. Since 1887, the City of Atlanta’s seal has featured a phoenix, reflecting Atlanta’s rise from the literal ashes of its destruction in 1864. This symbol, and its accompanying motto Resurgens (to rise again), points to the extent to which Atlanta understands its legacy in the context of the Civil War and Reconstruction. As part of its mission to place history and maps in dialogue, ATLMaps features two layers related to the Civil War: one highlighting the earthwork fortifications built to defend the city of Atlanta from Union armies, and another comprised of the twelve stops that constitute the Battle of Atlanta: A Tour of History and Remembrance.

The mobile tour and accompanying essay launched in 2014 to mark the 150th anniversary of the Battle of Atlanta, which occurred on July 22, 1864. The app and essay detail the eight-hour battle, point readers and users to the physical remnants of the battlefield, and describe how Atlanta memorialized the conflict and its combatants in the late nineteenth and early twentieth centuries.In ATLMaps, the City Fortifications: Battle of Atlanta layer reveals to users how Atlanta sought to defend itself in the closing months of the Civil War. Specifically, the data layer depicts the ten miles of fortifications that encircled downtown Atlanta from Georgia Tech’s campus in the northwest to Grant Park in the southeast. These earthworks were completed in 1864 and placed roughly one-and-a-half mile from the city center. When viewing the fortifications in ATLMaps, users can see just how small Atlanta was at the time within the center of the defensive earthworks. Lemuel Grant, the engineer who designed the ring of fortifications and would later give Grant Park its name, placed them along topography where he believed the Confederate army would have a natural advantage. Despite this thinking, Grant’s lack of military experience ultimately limited their utility as he had failed to account for the range of Union artillery, with which General Sherman and his forces were able to shell the city without coming near the ring of fortifications. Ultimately, the poor placement of these fortifications forced the Confederate troops to mount an attack against the surrounding Federal troops, leading to the Battle of Atlanta.1

The ATLMaps layer helps us understand the strategic positioning of these fortifications, the limits of the city in 1864, and why the Confederate forces decided that an assault on the Federal lines was the only option left to defend Atlanta.The locations highlighted within the Battle of Atlanta Tour layer reveal the broad area of the city in which this battle then took place. The layer embeds the twelve sites featured in the Battle of Atlanta mobile app, created using the Emory Center for Digital Scholarship OpenTour platform, and describes their importance during and after the battle. Users, for instance, can read a short essay detailing the importance of Fort Walker as part of the Confederate fortifications and watch a video depicting how the site has looked over the last 150 years. Taken together, the twelve sites allow users to understand how the battle unfolded, where significant moments occurred, and what remnants remain.By placing these two layers in dialogue with maps depicting Atlanta’s urban planning also available in ATLMaps, users can see how the city’s rapid growth in the twentieth century has slowly buried its nineteenth-century history.

By enabling the Primary State and Federal Highways in the Vicinity of Atlanta, Georgia map, for instance, we can see how Leggett’s Hill stood in the way of transportation planning for Memorial Drive, Moreland Avenue, and I-20. Although Leggett’s Hill was one of the most important strategic locations in the battle, state and city planners decided to bulldoze it in the 1960s to facilitate growth between downtown Atlanta and neighboring East Atlanta. Similarly, another section of the battlefield was razed in 2004 to make room for the Edgewood Retail District. Atlantans did not lament the destruction of the city’s Civil War legacy until the damage had already been done. As the Atlanta Journal-Constitution noted at the time, the workers contracted to build the shopping center had not even known that they were working on the site of a battle.2ATLMaps provides a platform through which users can see the clash between past and present. As Atlanta continues to expand, the nineteenth-century city and its legacy has largely disappeared.

Where there were once fortifications and a Civil War battlefield, there are now the neighborhoods of Peachtree Hills, East Atlanta, Inman Park, and Mozley Park. But by allowing users to view and understand these changes in ATLMaps, we are now able to better contextualize the city’s history, its priorities for growth, and to think of how Atlanta might better incorporate its past into its future.