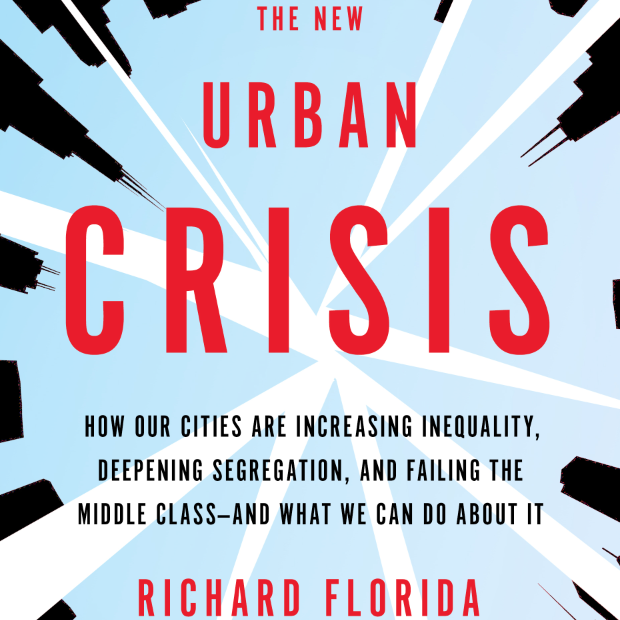 In The New Urban Crisis, Richard Florida seems to have somewhat of a crisis of his own – a crisis of conscience regarding his creative-class dogma.

This dogma is usually traced to his very popular 2002 book, the Rise of the Creative Class, which turned him into a veritable superstar urbanist. Simply put, in Rise, Florida argued that growing the creative class was the solution to urban decline. In the past, the thought was that people followed jobs, but in writing Rise, Florida had discovered– like some others before him1 – that jobs often followed people, especially in the knowledge economy of the late twentieth and early twenty-first centuries, where physical plant became less important than human capital and creativity. And it is important to note that Florida did more than write Rise, and leave it at that.

He actively promoted the book’s call for drawing in the creative class, in city after city. In fact, he begins his new book by recalling his many travels around the country preaching to chambers of commerce, metropolitan planning organizations, and Urban Land Institute types about the resurrectional power of luring these “creatives” into central cities as the path to urban rebirth.In The New Urban Crisis, Florida displays a new sensitivity to the problems of high housing costs, economic segregation, and inequality, especially in terms of what they mean for lower-income residents of the cities becoming cooler and more creative as a result of his past advice.

At the same time, however, he is somewhat defensive vis-à-vis the critics of Rise and his past evangelism, especially those from the left, which makes the book sometimes confusing. He worries about rising housing costs and acknowledges concerns about gentrification, but then sometimes argues that these problems are only substantial problems in what he calls “superstar cities,” a small number of large, wealthy, and highly unequal cities, such as New York, London, Los Angeles, and San Francisco.

Yet, as Florida acknowledges in some places in the book (especially in its last chapter), rising rent burdens among lower-income households are not restricted to these cities, nor is gentrification. Sunbelt cities such as Atlanta or Nashville are generally not the sorts of cities where Florida worries about gentrification, even though such places have landed on many lists of “fastest gentrifying” cities. And given the high poverty rates among existing residents in such cities, the portion of households paying more than 50 percent of their income in rent is higher than in some of Florida’s Superstar Cities. Yes, as Florida argues, concentrated poverty may remain a more common problem than gentrification in many cities, especially in those that are not growing, but gentrification is not isolated to a few cities in the United States, especially in recent years.

Florida makes some good comments about separating out the specific problem of displacement from the larger set of issues associated with gentrification, which may or may not result in large amounts of displacement. In fact, when low-income residents remain in gentrifying neighborhoods, their housing costs may skyrocket, imposing tremendous stress. There are many reasons why families might not move under such circumstances, including schools, social and family ties, and simply stasis. For example, here in Atlanta, even if the Beltline’s strong pressure on housing prices and rents does not result in a lower-income family leaving a nearby neighborhood, the family is likely to be paying significantly higher rent or property taxes in the near future, which will leave less disposable income for day-to-day living.2 But overall, while Florida admits that gentrification can cause problems, he seems to mostly (but not completely) dismiss it as a sporadic and sometimes overblown problem.

I suspect that, if I could have read The New Urban Crisis without the baggage of knowing the story of Rise of the Creative Class and the accompanying promotions of “creative placemaking” and “cool cities,” I might have found more to like in the book. Florida makes convincing cases for the evils of economic segregation (though he says almost nothing about racial segregation), the problems caused by NIMBY (Not In My Backyard) reactions to new housing development, and the fundamental problems of low wages and income inequality. These points are hard to disagree with.

Other parts of the book, however, may bring some objections from critical readers. First, some of the key concepts seem to be not much more than repackaged concepts. An example is Florida’s key concept of superstar cities, which closely resembles Saskia Sassen’s earlier concept of global cities.3 While Florida mentions Sassen’s work, the closeness of the concepts is not discussed.

Moreover, many urbanists may balk at Florida’s assertion of an “end of the suburb” narrative, which has appeared recently in a good deal of popular urbanist journalism. Florida argues that “we are seeing the beginnings of a flight from suburban sprawl.” As the urbanist Jed Kolko has shown, however, the data suggest that, while the rate of sprawl slowed during the Great Recession, it has picked back up since, even while there has been growth near many downtown areas.4 For example, while there is no doubt that the City of Atlanta has gained population since 2010, especially in certain neighborhoods, growth has also resumed, and at a faster pace, in far-flung suburbs such as Forsyth, Barrow, and Paulding counties.5

Some of the most problematic portions of the book come in its final chapter when Florida discusses policy recommendations meant to address the problems he has outlined. I agree with some of his recommendations, including cost-of-living-adjusted minimum wages and increasing subsidies for affordable rental housing, but others seem misguided or naive.  For example, he seems to brush off the promise of inclusionary zoning too easily and suggests, without evidence, that these sorts of policies may have a sizable, and largely negative impact on development. 6

One section of this chapter that is helpful is his discussion of residential density. While Florida applauds reducing NIMBY restrictions on housing development, including in low-density exclusionary suburbs, he makes a point to recognize that increasing density alone will not lead to housing affordable for lower-income households in high-demand, highly urban locations. He points to the “urban land nexus” in which land is scarce in precisely those locations where it is needed most. Simply increasing housing unit supply in these places, will not dramatically lower the cost of housing so that it will be affordable to lower-income households. Or as he writes on page 192:

land use deregulation by itself – though a necessary part of the solution to the New Urban Crisis – is insufficient to address the full breadth of the problem. While it will result in new housing being built and in increased density, the high costs of urban land combined with the high cost of high-rise construction, mean it is likely to add more expensive luxury towers and that it will do little to provide the kinds of affordable housing our cities really need.

Florida also continues his call to shift US housing policy toward favoring rental housing. Although many will agree with his call to end the mortgage interest deduction, his suggestion that US affordable housing policy heavily favors homeownership is not borne out. The bulk of affordable housing subsidy is delivered through the Housing Choice Voucher and Low-Income Housing Tax Credit programs, which in fact subsidize rental housing. While expanding such subsidies would be wise, simply encouraging unsubsidized rental housing expansion will not be very helpful to lower-income households. And, as Florida himself has argued, the vast majority of new rental housing is luxury, and the notion that this housing will filter down rapidly and be affordable to lower-income renters is not borne out by the evidence.7 Moreover, unlike homeowners, lower-income renters are subject to rising rents and asymmetric power relationships between landlords and tenants in most rental markets. As demonstrated so powerfully in Matthew Desmond’s Evicted, the low-end of the rental market in most US cities is not one that is very beneficial to tenants. Although homeownership is often not the answer for the lowest-income households, for many modest-income households it can provide for long-term affordability, security, predictability, and the opportunity to build wealth over time when mortgages are well regulated.

Finally, Florida reveals some naivete regarding state and local politics in the United States when he calls for looking to cities and mayors to carry out his policy proposals. While this is certainly doable in some cities, such as New York City or San Francisco, especially when they have sympathetic state legislatures, it is much more difficult in many other cities, at least until state policy environments change. Cities are creatures of state government and, as such, in many policy arenas they are given quite limited power. Moreover, when cities try to exercise power toward progressive ends, state legislatures can often usurp it through state preemption. In many states, when progressive cities move to raise minimum wages or enact inclusionary zoning laws, more conservative state legislatures – such as Georgia’s — often stand ready to preempt such measures as soon as employers or real estate developers request them to do so. 8 Such state preemption of progressive city policies has only worsened in recent years as conservatives have consolidated power at the state level. Without addressing this issue, many mayors’ hands are at least partly tied.

All in all, The New Urban Crisis is an important book, if only because it is likely to be read by influential urban policy types who will surely cite it in future publications. For this reason, I have focused more on some of its key weaknesses, especially in its policy prescriptions. Regardless of your likely opinion of the book’s arguments, or of Florida’s earlier work, the book should probably be on your reading list.