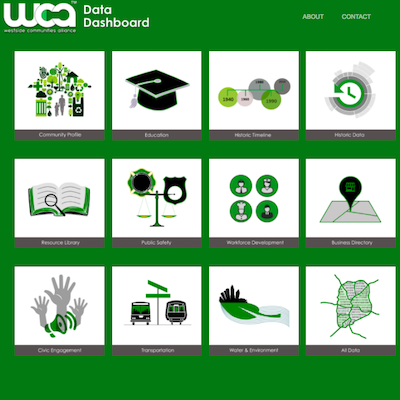 Economic inequality across the United States grew rapidly over the past several decades with Atlanta having one of the highest disparities.

An analysis by the Brookings Institution found the 2014 national inequality ratio 1 was 9.3 compared to Atlanta at 17.5.

In west Atlanta, large development projects have strained communities and caused displacement due to rapidly growing rents. Neighborhoods saw median rents increase more than 14 percent over the past four years with the greatest increase in English Avenue at 22 percent. 2

For elders on fixed-incomes or households with chronic underemployment, these increases are too much to bear. At the same time, residents are often excluded from critical conversations about their neighborhoods’ future because they are considered ignorant on the technical details that governmental agencies require. Community organizations are forced to resort to emotional appeals rather than facts.

To push against this growing inequality and to protect communities, it is imperative that local non-profit organizations, neighborhood advocacy groups, and the residents themselves act as guiding agents to combat changes. As agencies are pushed to make evidence-based decisions, the role of data in the decision-making process takes on ever greater importance, further shutting out communities. Tools designed to break down barriers to data help expand opportunities for communities to participate in governmental decision-making. Increased citizen participation ultimately results in a parity of services and amenities at the neighborhood level and a potential for greater equality.

The Westside Communities Alliance (WCA) 3 recognized the need for a democratic distribution of data and created the WCA Data Dashboard.

Data accessibility helps us achieve the goal of genuine equality in a few different ways. First, accessible data helps organizations and citizens keep a watchful eye on agencies to ensure the timely follow-through on promises thus leading to increased transparency and accountability. Data accessibility improves collaboration with the community not just in planning, but in implementation as it is easier to work together when everyone has equal access to information. Often, different organizations are spending time and resources gathering the same data. By keeping data open and accessible, groups are aware of what is already out there thus reducing duplicating efforts. Data can increase citizen participation by making individuals feel more informed about participating in the process, building their confidence to understand what is presented, and to make informed decisions. Finally, data can improve efficiency because the community is no longer envisioning optimal solutions from a merely historical or emotional vantage point, but rather can rely on analysis based on the facts of the current situation.

The Westside Communities Alliance’s Data Dashboard is a one-stop data shop presented in locally recognized and meaningful geographies. And while the site design focuses on the Westside, much of the data featured is available for neighborhoods throughout the city. Additionally, although site construction took place at Georgia Tech, most of the dashboard development evolved directly from community requests and suggestions. Community members steered the form of the dashboard at formal presentations, structured focus groups, and in one-on-one meetings held over a period of eighteen months. Throughout the process, the WCA worked in continuous dialogue between the site developers, community organizations, local universities, and governmental agencies.

One of the initial Dashboard design focus groups centered around the exploration of national and local data sites to understand user experiences. Feedback demonstrated the need to build a tool with a simple and intuitive interface that streamlined users’ data accessibility into a single site. This was achieved by creating thematic portals linked directly from the home page.

Through the Data Dashboard the user can view data as a bubble, bar, or line graph, which is then displayed using an animated motion chart. However, it is also important to recognize that communities are not just a series of data points, but rather a dynamic population with historical roots. This is especially true of the Westside, which was the center of the civil rights student movement and includes the former home of many civil rights leaders such as Martin Luther King Jr, Ralph David Abernathy, and Maynard Jackson. The Historic Timeline thus aims to give context to the data by presenting events and policies (both local and national) that possibly affected Westside residents. Events are organized into categories such as politics or education and displayed as an interactive timeline where users can read about the event, access sources, and hear or watch available audio or video from the event. The Resource library contains articles, studies, and plans sourced from newspapers, city agencies’ reports, university publications, and archival research. This portal highlights the decades’ worth of studies and city plans that have yet to produce significant outcomes. The Public Safety portal includes crime data, code violations, fire data, and vacant housing displayed using both maps and graphs. The maps allow organizations to pinpoint crime hotspots or determine the built environment’s impact on crime.The Dashboard can be put to a variety of uses by different organizations. Local government agencies can employ the site to conduct an extended analysis of their community. Nonprofits can access pertinent demographic data to seek grant funding. Advocacy groups can arm themselves with data prior to critical meetings with influential city officials. Being prepared with data not only increases the credibility of the advocacy groups, but also helps shift the conversation in favor of their proposals.Equality is more than having a right to vote or access to the same public spaces; it is having equal access to high-quality schools, meaningful job opportunities, and high-quality housing. Data access does not guarantee equity for individuals or between neighborhoods and areas of the city, but can act as a tool to help the community to participate in decision-making and to make visible the inequities of their situation to the general public. Building a community-driven online site is the fastest way to disseminate important data sets. The Dashboard not only brings data to the community but changes the narrative by highlighting assets rather than the often more visible deficiencies. Used properly, visible data can help shift the power structure for decision-making from state and local agencies to the community and require accountability and transparency. Ultimately, we hope WCA’s Data Dashboard can not only enable Atlantans to better advocate on behalf of their communities, but also serve as a model for other communities throughout the United States who are interested in achieving greater equity and promoting genuine equality.