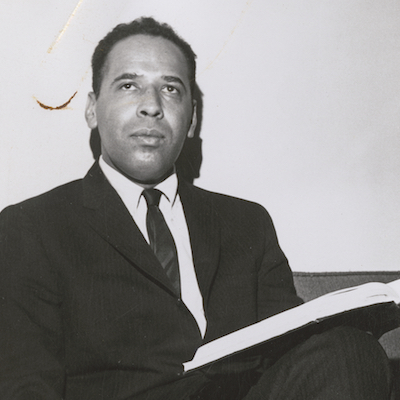 Protests and Civil Rights in Atlanta: The Papers of Howard Moore, Jr. at Emory’s Rose Library

The noted civil rights attorney Howard Moore, Jr. is best known today for his role as lead counsel in the defense of Angela Davis, who was acquitted in 1972 on charges stemming from the August 1970 armed takeover of a courthouse in Marin County, California.

Davis, whose firearms were used in the incident, maintained that she had not known about the plot in advance, which would have made her just as culpable as the perpetrators. Instead, she argued that her associations with the Communist Party, the Black Power movement, and fundraising efforts for black prisoners had prompted her incarceration as a “political prisoner.” Her acquittal was therefore a symbolic victory for the many activists who had accused the state of repressive and devious tactics against political dissidents in the name of “law and order.” 1 Moore’s move to California in 1971 to work on the Davis case began a long legal career in the Bay Area, which lasted well into the 2000s.

However, Moore was a native of Atlanta, spending his youth in the elite black community centered around Auburn Avenue. He had first become interested in law after seeing Thurgood Marshall speak at the NAACP’s national convention in Atlanta in 1951, and after attending law school at Boston University, he returned to his hometown to work on behalf of the African American freedom struggle. Important cases that put him in contact with some of the most important figures of the civil rights movement filled the early years of Moore’s career.

In 1966, for example, the Georgia House of Representatives refused to seat the newly elected Julian Bond because he had voiced support for a Student Non-violent Coordinating Committee (SNCC) statement against the Vietnam War in his capacity as the organization’s communications director. Moore took the case all the way to the US Supreme Court, which ruled that the Georgia legislature had infringed upon Bond’s First Amendment rights. Moore also successfully defended Stokely Carmichael, another SNCC member and the originator of the phrase “Black Power,” against charges of insurrection resulting from a 1966 riot in Atlanta’s Summerhill neighborhood. Much as Angela Davis would argue later, Carmichael claimed that the state had embraced a flimsy pretext in order to silence his political activity. As legal historian Tomiko Brown-Nagin – who wrote about both the Bond and Carmichael cases in her book on the civil rights struggle in Atlanta – has noted, these victories earned Moore a reputation as “a ‘splendid’ go-to lawyer for peaceniks and leftist radicals caught up in the clutches” of the ascendant and sometimes authoritarian American right. 2 Indeed, after these cases, Moore defended a number of other dissidents against the Vietnam War, including several Atlantans who had refused draft induction.

Moore’s work in Atlanta also brought him into contact with college students arrested for participation in the sit-in protests around the downtown area. Cases Moore handled included the celebrated Heart of Atlanta Motel incident, as well as sit-ins at Leb’s Restaurant and a Krystal. The victory in the Heart of Atlanta case reaffirmed the 1964 Civil Rights Act and the legality of criminalizing discrimination in private spaces.

The materials in Moore’s papers, held by Emory University’s Rose Library, record the inside stories of the civil rights era in “the city too busy to hate.” For example, Moore maintained close personal correspondence with his client Mardon Walker, a white student from Connecticut College who was arrested during the January 1964 Krystal sit-in. Walker was an exchange student at Spelman College when the protest occurred, and Moore got her out on bail while her case made its way through the legal system. In one July 1964 letter to Moore, Walker spoke of her excitement that an aide to the governor of Rhode Island had secured tickets for her to attend the coming Republican National Convention in San Francisco, ironic in light of the convention’s nomination of Barry Goldwater, a staunch foe of the Civil Rights Act, for president. 3 By November, however, she was in a much worse mood. Despite her appeals, it seemed that Judge Durwood T. Pye was determine to force her to return to Atlanta and serve her jail sentence for trespassing at the Krystal months earlier. Walker confessed that she was developing a “cynical view on the whole grotesque situation — the trial, the appeals . . . a trapped feeling, where I know I can’t win.” 4 It would eventually take a trip to the US Supreme Court for her to see her conviction overturned, but that was not before the powerful proponents of segregation in Atlanta forced her to endure their ugly intensity. The letters from Walker to Moore document her changing personal feelings as this very public process unfolded, enhancing our understanding of this important moment in the city’s history. Moore’s papers contain many other such materials that add rich historical texture to the narratives already available in public legal records.

Given the current public focus on issues of race, incarceration, and criminal justice, Moore’s papers will serve as a valuable resource for scholars attempting to make sense of the complicated histories of these topics. Moore’s papers – which join other holdings at the Rose Library related to civil rights and Black Power, including the records of the Southern Christian Leadership Conference and a number of SNCC activists – will be open and available for research in summer 2017.