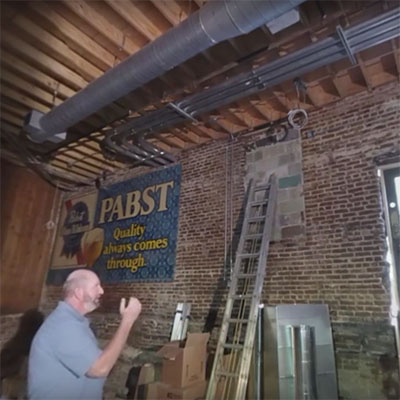 Virtual Reality is all the rage these days.

It’s easy to scoff at all the hype, but until you try the new technology, you can’t fully comprehend the experience. Cheap and readily available devices like Google Cardboard, while not providing as powerful an immersive experience as more expensive headsets like the Oculus Rift, have allowed anyone with a smartphone to watch VR content. Last November, the New York Times sent Google Cardboard to over a million of their subscribers. They continue to create and collect VR content on their nytvr app. Much of the content from NYT and their competitors is compelling, but much of it is just “neat” and can wear thin fairly quickly. With any new media it’s hard to figure out how, when, and why to use the new technology.

Georgia State University’s Student Innovation Fellowship program recently purchased a 7 GoPro VR video rig, and we wanted to experiment with how, when, and why to use the new device. Manuel’s Tavern was a couple of weeks from reopening, and because of our connection to the Unpacking Manuel’s project, tavern owner Brian Maloof agreed to show us some of the changes to the bar. We felt like a tour was the perfect way to test the rig because it would be fun to explore the renovated space in 360. When Maloof points to the playing cards still on the ceiling, the camera doesn’t pan. The viewer has to actually look up. When you hear hammering behind you, you can turn around to see what ‘s going on. Documentary filmmaker Ruth Dusseault did the shoot with Mat Munson, Alec Leverett, and Gerrett DeHart, GSU multimedia designers from the Center for Excellence in Teaching and Learning.

They set up in five locations, as Maloof explains some of the decisions made in the renovation. Over the next week, the multimedia team stitched and edited the video. It’s a new process, so you will see a few glitches, but we are excited about the finished project. The Tavern is now open. With our video you can get a sense of the construction process, and as we continue work on the Unpacking Manuel’s project, you will be able to explore the bar before the renovation. You can watch the video on a computer and pan the video with your cursor, or watch on your phone and actually move in the direction you want to look. Most mobile devices will allow you to use a VR viewer like Google Cardboard as well.