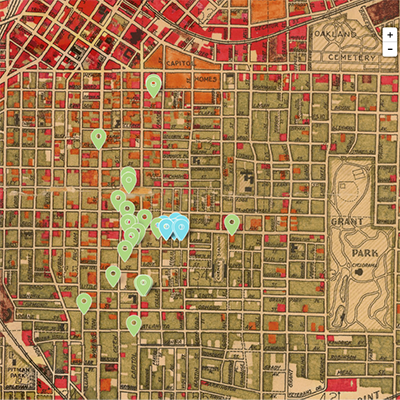 How do you tell the story of a neighborhood when so much of the evidence of its existence has been erased?

How do you best document the lived stories of communities when their houses, businesses, and places of worship have been torn down to make way for interstates, stadiums, and parking lots? Atlanta is known for tearing down and rebuilding, reinventing itself based on the urban planning trends of the time. Perhaps no other area in the city has been more affected by this reinvention than the neighborhoods around Turner Field.

Stadiumville proposes to document the history and memory of the events and people who have shaped these neighborhoods and the redevelopment of the area as the Atlanta Braves leave for the suburbs.

Our project began as a test case for the ATLMaps platform. Maps from GSU’s Planning Atlanta collection were layered with location pinpoints of the Living Walls murals to show how an art project in 2013 was connected to urban planning decisions a half century earlier. When the Braves made their surprise announcement, a team of GSU historians, filmmakers, and digital humanists began interviewing current and former residents of the area, along with city planners and baseball fans. These oral histories will grow into a database film project using the Korsakow platform and added as another layer on ATLMaps. We hope to continue adding layers to the map as the story unfolds.