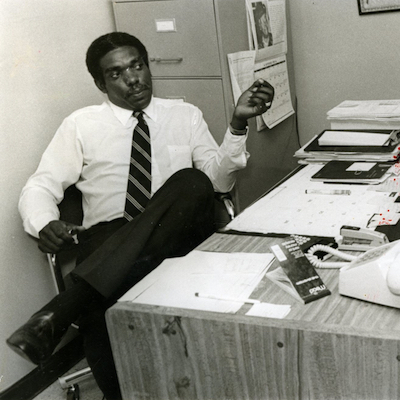 Activism Preserved: The Records of the Cobb County NAACP at the Kennesaw State University Archives

Many today consider the burgeoning metropolitan county located just northwest of Atlanta to be an attractive place to live, home to landmarks such as the newly built Atlanta Braves stadium SunTrust Park, the Marietta/Cobb Museum of Art, Six Flags over Georgia, and Kennesaw Mountain National Battlefield Park. Some celebrate Cobb for its changing demographics and rapidly increasing ethnic diversity. Despite the growing cultural richness of Cobb County today, many people also remember a time when large parts of Cobb lacked any trace of cultural and ethnic diversity. A little over fifty years ago, African Americans accounted for less than five percent of the county’s total population. Today, African Americans account for nearly thirty percent of the population in Cobb.1 Thomas A. Scott – professor emeritus of history and campus historian at Kennesaw State University (KSU) – remembers the blatant lack of diversity in Cobb County when he first arrived in 1968: “People in East Cobb could go weeks without seeing anybody who was other than Caucasian. I think Smyrna was deliberately zoned so that not a single black person lived in that city.”2 The culmination of these circumstances became the driving force for the founding of the Cobb County Chapter of The National Association for the Advancement of Colored People (NAACP), whose historic records now reside in the KSU Archives. The archives of the Cobb NAACP reveal the evolution of black life in Cobb during the mid-twentieth century and show its transformation from a minimally diverse county into the major metropolitan area that it is today.

Since its establishment in the late 1970s, the Cobb NAACP has served as a rock for the African American community in the northwest Georgia region. At that time, the chapter was based in the city of Marietta – the county’s seat and largest city. In 1982, the chapter reorganized and transformed from the NAACP Marietta Branch into the NAACP Cobb County Branch. With this change came a new branch office and a greater ability to serve citizens throughout the entirety of Cobb. Since its reorganization, the Cobb NAACP has had a remarkable impact on justice and equality for African Americans and other marginalized groups in Cobb County through voter registration, public programming, legal counsel, workshops, and by keeping a watchful eye on threats to justice within the community. While the Cobb NAACP works tirelessly to preserve equal rights for people of color in Cobb, the KSU Archives is determined to preserve the records that document the functions and activities of this significant local organization.[

It was not easy to acquire the Cobb NAACP records. Initially, members of the Cobb NAACP were hesitant to donate their records to KSU. Who can blame them? After all, many members of the NAACP remember when both KSU and Cobb County struggled to demonstrate an appreciation for diversity. In 1970, KSU (at the time called Kennesaw Junior College) had an African American student population of less than one percent.3 During this period, some black parents expressed apprehension about sending their children to Kennesaw for school, considering there were so few people of color within the student body and among faculty. Over the years, however, KSU has grown dramatically in its dedication to celebrating ethnic, religious, socioeconomic, and sexual diversity. And in 2008, KSU established the Office of Diversity and Inclusion to address the needs of its rapidly diversifying campus. Now, students of color make up thirty-eight percent of the student body population at KSU 4 This university-wide commitment to diversity played an integral role in the KSU Archives’ acquisition of the Cobb NAACP records. After a significant amount of discussions and relationship building between leaders of the Cobb NAACP and staff from the KSU Archives, the Cobb NAACP donated the first batch of its records to the KSU Archives in 2009.

The initial 2009 donation of Cobb NAACP records included a variety of materials documenting the administrative functions of the chapter. The majority of these records range in date from the late 1970s until 2009 and include meeting minutes, promotional materials, correspondence, photographs, event programs, awards, newspaper clippings, and more. Within these rich materials, there are some particularly interesting items, including a collection of the Cobb News and Cobb Community News – two local African American newspapers produced in Cobb during the 1970s. These newspapers are important because they show social solidarity among the African American community in Cobb during a time when the black population was numerically minimal. The collection also contains programs from a variety of award ceremonies and other events, including one signed by Myrlie Evers-Williams, the widow of noted civil rights activist Medgar Evers.

The initial collection of Cobb NAACP records serves as an excellent resource for understanding how the Cobb NAACP functioned during the late twentieth century. Yet these records only tell part of the story. In 2016, the KSU Archives worked with the Cobb NAACP to additionally acquire records from current and past Cobb NAACP presidents. The Archives received collections of material from current Cobb NAACP president, Deane Bonner, and from former Cobb NAACP president, the late Oscar Freeman. These records compliment the previous donation and are consequential in their own right as they bring a personal element to the current administrative and organizational records in the collection. They include greeting cards, letters, photograph albums, scrapbooks, awards, certificates, and other items that demonstrate how involvement in the Cobb NAACP influenced individuals’ personal lives.5 Of particular interest is the scrapbook belonging to Oscar Freeman. The scrapbook includes a variety of material, including photographs, newspaper clippings, handwritten notes, and correspondence. These records document milestones in Oscar Freeman’s presidency as well as public reactions to his work as president. In addition, the scrapbook traces the story of the Cobb NAACP during its critical reorganization period during the mid-1980s. The KSU Archives team digitized this entire scrapbook and has made it publicly available here: https://soar.kennesaw.edu/handle/11360/2093.

Two particularly interesting pieces of correspondence in the scrapbook show the Cobb NAACP’s involvement in higher education in Cobb County. One is a 1984 letter Oscar Freeman wrote to Steve Cheshier, then president of the Southern Technical Institute (now known as Kennesaw State University – Marietta Campus). In the letter, Freeman thanks Cheshier for inviting the NAACP to a leadership forum held at the Southern Technical Institute and offers to collaborate with the school in the future. The other piece of correspondence is a 1986 letter that Julia M. Collier, then Assistant Director of Admissions at Kennesaw College, wrote to Oscar Freeman. In it Collier expresses a desire to conduct outreach initiatives with the Cobb NAACP and educate its members about academic opportunities. These letters are significant because they show how the Cobb NAACP played a role in developing the diverse communities that now exist at Kennesaw State University.

As the meaning of diversity continues to expand in Cobb County, the archives of the Cobb NAACP demonstrate how the struggle for African American justice and equality fits into the larger history of African American life in Cobb County and the metro Atlanta area. To promote this history further, the Kennesaw State University Archives has recently become a member of the newly formed Atlanta Black Archives Alliance (ABAA). ABAA is a multi-institutional, community-focused group of archivists who are committed to enhancing the visibility of Atlanta’s African American archival collections in order to educate and empower diverse communities and currently includes representatives from the Kennesaw State University Archives, the Georgia State University Archives, the Stuart A. Rose Manuscript, Archives, and Rare Book Library, the Atlanta History Center, the Atlanta University Center Woodruff Library, the Auburn Avenue Research Library, and the Spelman College Archives. The work of ABAA is still coming to fruition and is expected to include academic workshops, community seminars, preservation assistance, and a published resource bank of African American archival collections around Atlanta. Using archives to understand and contextualize the black experience is integral to scholarship, activism, and community engagement within Atlanta and its metropolitan areas, including Cobb County. Crediting the development of Atlanta to certain “historic” figures or confining it to city limits leaves many stories untold. Local history archives reveal how the work of individuals, communities, and organizations intertwine to document an inclusive history of Atlanta.[/vc_column_text][vc_column_text]Continue to check SOAR for a growing selection of digitized materials relating to the Cobb NAACP records. If you are interested in conducting research using the full Cobb NAACP records held at the Kennesaw State University Archives, please contact archives@kennesaw.edu or 470-578-2689.