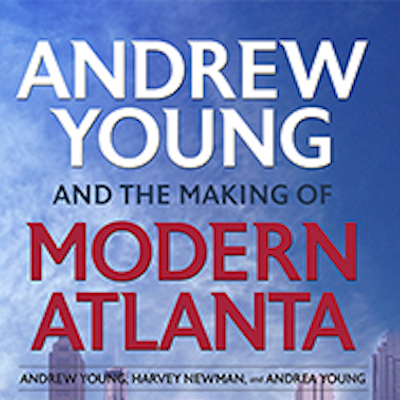 Book Review: Andrew Young and the Making of Modern Atlanta

Books on the history of Atlanta are much-needed parts of the larger narratives on southern and African American history.

With the city being an important target for the Federal Army during the Civil War, a center of the “New South” in the 1880s, and then an important leader of the progressive South during the twentieth century, understanding Atlanta’s history is a necessity for making sense of larger sectional and national trends. Andrew Young, civil rights activist and southern politician, is an important figure in Atlanta’s postwar history. A new book featuring his thoughts on the city of Atlanta and its history, Andrew Young and the Making of Modern Atlanta, interweaves the city’s post–Civil War narrative into national history yet falls short of the depth of comparable recent histories of the city while largely leaving out Andrew Young’s own critical perspective.

Andrew Young and the Making of Modern Atlanta was written by Harvey Newman, Professor of Public Management and Policy at Georgia State University, along with Andrew Young himself and his daughter, Andrea Young, a scholar in residence at Georgia State and now the Executive Director of the ACLU of Georgia. The book’s focus is the unique confluence of race, economics, and politics in Atlanta since the end of the American Civil War. For the Youngs and Newman, Atlanta’s growth was due to the drive of its citizenry to create a new capital for a South recovering from the Civil War. Moreover, they argue for the centrality of business leaders and moderate politicians in leading Atlanta to prosperity in the face of racial strife and massive economic changes in the twentieth century. The book offers a useful introduction to this general history of Atlanta for readers unfamiliar with the city’s past. This breadth, however, is also a weakness of the book.

The title of this book could easily have been The Making of Modern Atlanta. The authors do a serviceable job of describing Atlanta’s history, from Henry Grady and his drive for a “New South” in the 1880s to the rise of African American political and economic strength in the aftermath of the civil rights movement. But anyone hoping for a unique perspective on Atlanta from the point of view of Andrew Young—former Mayor of Atlanta and Congressman from a district within the city—will be disappointed. Young appears in the book as a historical figure, but his role in the book’s narrative is surprisingly incidental given Young’s co-athorship and his name’s inclusion in the book’s title.[/vc_column_text][vc_column_text]To their credit, the authors do nicely tie Atlanta’s travails in the 1970s to the larger “urban crisis” of the period, written about so extensively by historians such as Thomas Sugrue and Robert Self. 1 Pointing to the early 1970s, and Mayor Maynard Jackson’s tenure, as difficult due to the rise of crime in the city, the authors argue that it led to “the first significant public conflict between business leaders and the mayor’s office since the end of World War II.” (66) This was a marked contrast to how business—and politics—were done in Atlanta prior in the postwar period. Politicians and business leaders in the city had worked hard in the mid-twentieth century to make sure racial and class strife was kept to a minimum, prioritizing the city’s prosperity. While the Youngs and Newman talk about the challenges of Atlanta during the 1970s, in particular Maynard Jackson’s clashes with the business elite over minority economic empowerment, but miss an opportunity to delve more deeply into the conflict and compare and contrast it to conflicts over race, business, and development in other southern cities during the same period.

When reading Andrew Young and the Making of Modern Atlanta it also becomes clear that marginalized voices are missing from the text. The experiences of the poor and dispossessed of Atlanta—those who paid the price for Atlanta’s growth and relative prosperity—are virtually absent. Considering that the book is, above all, a testimony to Atlanta’s rise as a regional, national, and international city, the lack of activist or poor voices is not surprising. But including poor Atlantans’ perspectives would have helpfully contextualized Mayor Young’s attempts to reconcile business leaders with the rise of African American political power in the late 1970s and 1980s. While the authors do argue that Mayor Young smoothed over relations between business and the black community that had been harmed by Maynard Jackson’s aggressive leadership in getting more money in the hands of minority business developers, the book barely discusses the resultant displacement of the poor by economic development in Atlanta.

Other recent histories of Atlanta ultimately delve more deeply into the city’s past. Books such as Tomiko Brown-Nagin’s Courage to Dissent, Winston A. Grady-Willis’ Challenging U.S. Apartheid, and Derrick White’s The Challenge of Blackness offer compelling and deeply nuanced perspectives on Atlanta’s racial, political, and intellectual history during and after the civil rights movement. 2 These books illuminate the radical activism that has long been a part of Atlanta’s African American political and intellectual history, often crossing the class lines that aren’t highlighted in this book. By contrast, what the Youngs and Newman offer is instead something closer to an advertisement for the abiding greatness of Atlanta.

That is a shame. Andrew Young navigated Atlanta as an influential activist and politician, and his perspective on the city is fascinating and consequential. A more honest history of Atlanta, from the point of view of one of the city’s most important leaders, would make a fantastic read. Instead, Andrew Young and the Making of Modern Atlanta provides a “greatest hits” of recent Atlanta history, full of intriguing tidbits but without the critical insights or perspectives of marginalized groups of other, more nuanced recent books on the city.