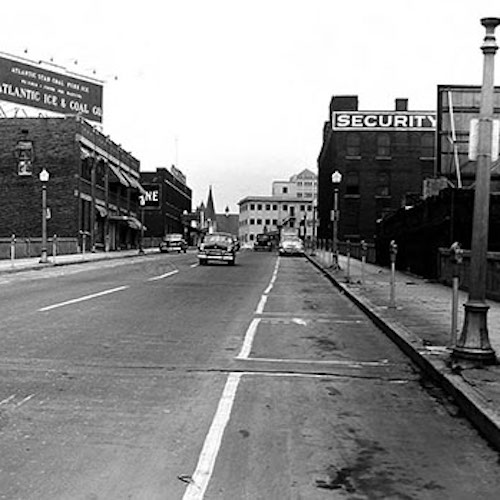 In a recent Creative Loafing opinion piece, “Atlanta’s Parking Addiction,” Matt Garbett persuasively outlined the problems with Atlanta’s ever-growing parking decks and development near transit projects such as the Atlanta Streetcar and the Beltline.

Garbett noted, “For Atlanta to be a more walkable or transit-oriented city, we need a mix of retail, residential, and commercial uses. To attract the people to support those shops, offices, and condos and apartments requires a variety of those uses be located in close proximity to each other. Parking destroys this possibility.” 1 Garbett’s critiques represent a fairly new way of thinking about parking in the United States, one that city leaders in Atlanta and throughout the region have generally not yet adopted. For at least 60 years, Atlanta’s leaders have actively advocated for or passively supported the steady growth of parking spaces in the city, especially in the central business district. This has resulted in an increase in the amount of parking spaces downtown from 18,507 in 1953 to an unbelievable 93,000 parking spaces in 2014. 2 This is a vast amount of space in the urban core solely devoted to vehicle storage. Atlanta leaders have long believed that the city has a parking problem and two mid-twentieth century Atlanta parking studies documents from the Planning Atlanta digital collection provide insights into how downtown became dominated by parking decks.

In 1953, with the publication of Atlanta’s Parking Problem: Report and Recommendations of the Atlanta Parking Commission, the first comprehensive study of parking in Atlanta, the city declared the lack of parking to be a significant problem. The report noted that “the parking problem is serious in many parts of the City of Atlanta; but the most pressing problem is in Atlanta’s downtown central business area.” 3 The report went on to note that in 1953 downtown Atlanta had “18,507 parking spaces and that the demand for parking on an average business day amounts to 19,107 spaces.” 4 While a deficiency of 600 parking spaces hardly seems cause for alarm, the parking commission argued that “serious parking shortages exist in certain districts… because most parkers do not like to walk any great distance after parking their cars.” 5 One could reasonably assume that the availability of on-street parking in the downtown area could help at least some motorists find parking directly in front of destinations, which would eliminate great walking distances. However, the report noted of the “more than 2000 [curb parking] spaces . . . over a period of time much of this supply may be lost as greater street traffic flows require elimination of more and more street parking.” 6

The Parking Commission’s report concluded with several recommendations. While not all were implemented, the recommendation that business owners provide direct parking became an undeniable reality. The Commission recommended “that downtown merchants, banks and owners of office buildings give serious thought to extending their direct parking activities.” 7 The report continued with this recommendation by suggesting that “if downtown merchants and building owners—either individually or by group action—can provide new convenient parking they will be better able in this automobile age to maintain their competitive positions.” 8

Similarly, a 1967 follow up study, Parking Demands and Needs, 1966-1983, Central Business District, Atlanta, Georgia, called for more parking. The 1967 study noted that “motorists require parking in proximity to their destinations; consequently, adequate parking is as essential as proper traffic control and flow. Inadequate parking can adversely affect the economic base of the central area.” 9 Making projections based on the study’s anticipated growth trends for downtown the report estimated that by 1983 the central business districts will need “42,272 spaces, as compared with 32,542 in 1966.” 10 With these projections, onward went the city’s insatiable drive to replace actual places of business with daytime car storage for commuters.

What is clear from both reports is that downtown leaders feared the loss of business from suburban areas. Acting on this fear, city leaders and business owners sought to reconfigure downtown to placate to one of the suburbanites’ most valued position’s and the motor age’s highest achievement, the private automobile. The 1967 report noted, “Parking enhances the downtown economy. It makes downtown more competitive with outlying shopping centers. Attractive parking, therefore, has become essential for modernization and growth of the CBD.” 11 Over the course of 60 years, this perceived need to appease suburbanites with ample parking has decimated most of the urban spaces that many people have now come to value. During this 60-year period, we have eliminated nearly all of the human-scale older downtown sections. The Fairlie-Poplar district is one of the few downtown areas that has not fallen victim to the scourge of parking and unnecessarily wide streets with no on-street parking.

Instead, most of downtown has become dominated by substantial parking deck structures and surface level parking lots, which are placed immediately alongside one-way streets that are often four to five lanes wide. Cars regularly treat these exceedingly wide streets as urban highways, traveling at speeds that are unsafe for an area that should cater to pedestrians. Courtland Street is a prime example of how providing “convenient parking” and the removal of on-street parking to allow for “greater street traffic flows,” exactly what both reports recommended, has created undesirable urban environments.

These sections of Courtland Street are currently five lanes wide with no on-street parking and are surrounded by substantial parking facilities. Photos by author.

As the City of Atlanta and many other metro area cities have recently embraced mixed-use land uses, the region has seen improvements to the urban environment. However, the City of Atlanta and the region have not wavered in their addiction to cars and providing valuable urban land to storing vehicles. This is painfully obvious even in the City of Decatur, the region’s most pedestrian friendly city, which has won accolades for its progressive land use regulations and steadfast improvements for pedestrians. Around the town’s square new mixed-use developments are filling in abandoned spaces and parking lots. The irony of these developments sprouting from parking lots is that significant portions of the land must still be devoted to parking because of minimum parking requirements. Just blocks from Decatur’s downtown MARTA train and bus station, these mixed-use developments are required to build enormous parking decks often taking one-third or more of the space.

Commenting on the impact of parking on urban density, Garbett noted, “Every parking lot and parking deck pushes the grocery store farther from the bank, the bank farther from the bar, and so on. Property where buildings could house residents who could support these businesses is used for the storage of automobiles instead.” 12 Requiring parking for all new developments within urban areas has largely destroyed the type of built environment that many people now cherish. In order for Atlanta and other cities throughout the region to develop more walkable and transit-oriented areas, unrestrained parking must be sacrificed. We need to accept that dense, walkable neighborhoods and abundant parking for our private vehicles are incompatible.

Solutions to this problem exist and Garbett offered two that should be considered by cities throughout the region: “First, the city can stop requiring developers to build a minimum amount of parking and no longer permit surface parking lots. Second, officials should start thinking of parking in terms of a district or neighborhood, not individual locations.” 14 New parking-free developments exist in cities throughout the country as written about in this 2013 Streetsblog piece. As a city and a region, we continue to build the type of urban environment that was sketched in the 1953 and 1967 parking studies. Without abandoning the notion that all buildings must accommodate vehicles, we will not be able to build truly walkable, transit-oriented neighborhoods in Atlanta or across the region.

Joseph Hurley is a Data Services and GIS Librarian at Georgia State University Library. His research interests include historical GIS, urban renewal, and built environment change and writes on urban change in Atlanta.