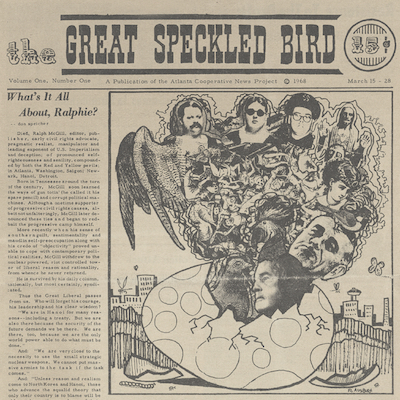 In 1968, politically minded Atlantans launched an underground newspaper, the Great Speckled Bird. Taking on political issues such as antiwar protests, the women’s movement, civil rights struggles, and gay liberation, the paper grew quickly from a biweekly paper to the largest paid weekly newspaper in Georgia.

During the paper’s eight-year run, its stellar young journalists also reviewed cutting-edge cultural arts and created some of the best photographs and graphic art to be found. Join us at Atlanta History Center – Midtown to commemorate the fiftieth anniversary of the founding of one of the most influential independent newspapers in the country. Meet the original journalists, view a pop-up exhibit documenting the paper’s history, and go on a scavenger hunt to Midtown sites associated with the paper and its most captivating stories.