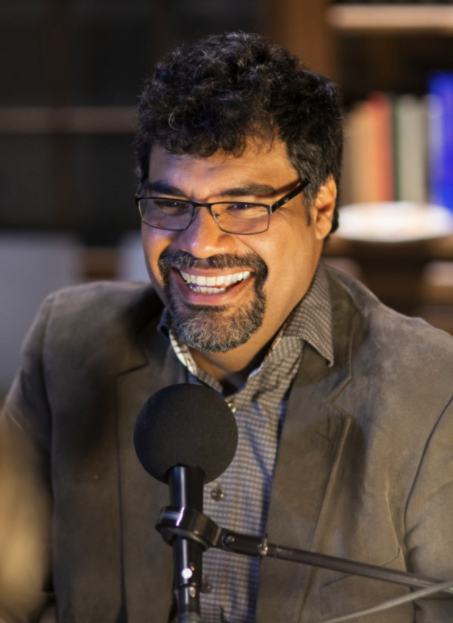 Conversations with the Board – Daniel Horowitz García on Oral History, Archives, and Atlanta

In the fall of 2020, Marni Davis, Associate Professor of History at Georgia State University and long-standing member of the Editorial Board of Atlanta Studies, spoke with Daniel Horowitz Garcia, Regional Manager for StoryCorps, and a new member of our Editorial Board. What follows is an edited, condensed version of that conversation.

Daniel Horowitz Garcia is a man of many pursuits. He’s a scholar, a political organizer, and a professional interlocutor; on the side, he’s a raconteur and a sci-fi geek. By some mad feat of ingenuity, he has managed to combine all of these interests into his vocation. An activist and historian by training, Daniel is the Atlanta-based regional manager for StoryCorps, a national nonprofit that facilitates oral history interviews between friends or family members, and archives those interviews at the Library of Congress. He’s also the founder of The Alternative Historian, a service that helps families, organizations and institutions discover and document their hidden histories.

He also hosts a podcast called “Change Over Time.” From that perch, he engages the histories of matters local, political, personal, and sci-fi-geeky, including AnachroCon, Atlanta’s annual convention for Alternate History enthusiasts, and his family’s experiences in Puerto Rico in the aftermath of Hurricane Maria.

Daniel joined the editorial board of Atlanta Studies in the fall of 2020.

Daniel, tell me how you came to work as a regional manager at StoryCorps.

I was in my last semester of graduate school, preparing my thesis, before my sanity ran out, when I applied to the job at StoryCorps. It was for a facilitator position; the StoryCorps interview is two people who know each other having a conversation, and the facilitator keeps track of time, takes notes, and we’ll jump in to ask questions. But for the most part it’s just two people talking, so I was just going to record people.

I learned about StoryCorps from my oral history class at Georgia State University, taught by the late Dr. Cliff Kuhn, but my job training was very different. It’s related, but most people at StoryCorps don’t think about oral history. They don’t play in that sandbox.

When you took the class, was that the direction you knew you wanted to go in?

I was an undergrad when I took the class; I didn’t know oral history was a thing. I was an eighteen year old college freshmen and a 37 year old sophomore. I was older than some of my college professors. But when I took Cliff’s class, being an older student, I knew what I wanted to study.

So what was it that called you?

I wanted to study the history of organizing, and I did my final project for the class on the history of multi-racial organizers and their experience with white supremacy. It was just after Obama got elected. I was focusing on the late twentieth-century U.S. South, race, gender, and social movements, Black women’s anti-poverty organizing from 1966 to 1996, but there were no primary sources. So that’s how I came to oral history.

So it was about creating the historical archive?

The thing I learned was that nobody does organizing history besides other organizers. I was at a conference where a woman presented on the history of strategic choices around this one union campaign, and I knew she must have previously been an organizer. That’s how I came to oral history.

Seems like StoryCorps is also creating an archive of everyday people, who can tell these important stories about what it was like to have an experience that goes under the historical radar … Is that how The Alternative Historian got started?

It’s more like a website persona. StoryCorps has one methodology, and it doesn’t do everything I want to do, so I do it under Alternative Historian. It comes out of three things. One is my path to being a historian is different from most others. I didn’t progress through to the professoriate; I took 20 years off, so my path is definitely different. Second, I mostly do counter-narratives, alternate histories; I’m a social historian by training. Third, there’s a sub-genre of sci-fi/fantasy called alternative history, so Alternative Historian is a play on that. They take ideas from anthropology and archaeology, and build fictional worlds around them: what would have happened to the history of colonization if an indigenous population had access to powerful magic? They’re also really good writers, just really brilliant.

I’m interested in counter-narrative, and oral history is the way I’m able to do that analysis. Oral history lets me combine my interests. I’m an introvert by nature; being in my garage, playing on my computer or reading books — I got that. Getting a microphone and sticking it in someone’s face…

It’s a method of creating not just archives but discourse too. And Atlanta Studies is a venue where the work you’re doing can be part of the city’s conversation about itself.

Atlanta Studies is a place where readers will know that Atlanta is a cultural hub, and I don’t have to convince them of that.

Do you see your work as a historian as the next stage of your organizational work? Do you feel like there’s some continuity, or is there a break?

Continuity, definitely. Absolutely. That leaves the question: who is this historical research for, ultimately? What I learned as an organizer is that popular education brings all the expertise in the room, including someone with a Ph.D. and someone who dropped out of elementary school. Both have important things to learn, and to teach.

Right now there’s a huge push culturally, on the left, that the Ph.D. should just shut up, and we should only listen to the person who dropped out. That’s not my experience. I’ve worked with people like farm workers, who say that if you know something you should say something, especially if it can help.