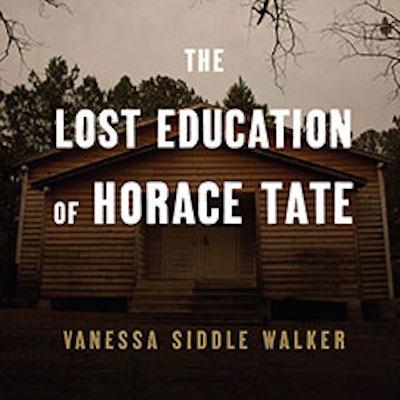 Restoring Educational Administrators to the Civil Rights Movement Narrative: A Review of The Lost Education of Horace Tate

Jackson was not the city’s first African American mayoral candidate, though. Horace Tate holds that distinction. Tate ran for mayor four years before Jackson’s successful campaign with a platform that foreshadowed many elements of Jackson’s future agenda; Tate called for professionalizing the police department, expanding the airport’s capacity, and improving educational opportunity within the city. Despite finishing third in the race behind Sam Massell and Rodney M. Cook, Tate was later elected to the George State Senate in 1974, where he served for sixteen years (346–348).1 Although he would become a familiar political figure in Atlanta and the state of Georgia, Tate’s earlier career in education has been largely hidden. Vanessa Siddle Walker’s The Lost Education of Horace Tate illuminates the contours of Tate’s professional life as an educator and educational administrator. Walker reveals how African American educators like Tate supported the Black freedom struggle from Reconstruction to the Civil Rights Movement in critical yet often ignored ways, serving as what she calls “hidden provocateurs.”

To uncover Tate’s life as a “hidden provocateur,” Walker interviewed him on a weekly basis for two years. As Walker developed a rapport with Tate, he began to provide her with documents from his personal archive. Reflecting on her access to Dr. Tate and his documents, Walker writes, “I knew materials on black schools were scarce, so I understood these documents were important, even after I looked at them and they seemed to have nothing to do with his stories” (2). In other words, the documents only made sense after Walker retraced the steps through the oral history interview transcripts and situated Tate’s words in conversation with the written source material.

By drawing upon these rare materials, The Lost Education of Horace Tate recasts the narrative of African American educators’ involvement in the Civil Rights Movement. For several decades, scholars have largely dismissed and downplayed the role of African American educators during the movement. But recent scholarship by Tondra Loder-Jackson, Scott Baker, and others has offered more nuanced narratives that move beyond viewing these educators as only either accommodationists or activists.2 Walker joins Loder-Jackson and Baker in viewing teacher activism beyond such a binary.

African American educators may not have been as visible as activists in the public sphere, but protesting in the streets was but one means of seeking educational justice. As Walker reveals, we need to dig deeper to understand the multitude of strategies employed by these educators to fight for educational equity. Notably, where Loser-Jackson and Baker focused only on African American classroom teachers, Walker expands her account to include and even center the role of African American administrators in her history of educational activism.

Walker casts the book as a bottom-up account, but it is perhaps more accurate to say that her narrative focuses on the “forgotten middle.” In Walker’s account, Tate exemplifies the black men and women who as administrators were “in the middle” and who facilitated the fight for equitable education in the South in critical ways. As Walker explains,

educators had sometimes appealed directly to southern state boards of education and political leaders, but they also quietly supplied plaintiffs and money to the NAACP and maneuvered secretly in myriad ways to gain resources and access. Through their organizations, black educators had been masterly tricksters who fought injustice with the dual weaponry of the appearance of reasoned public petition and stealthy daggers that challenged failed democratic practices. Meanwhile, as revered community leaders, they skillfully used curriculum to teach children to believe they could be full U.S. citizens (3).

To illuminate the development of this black organizational network, Walker divides the book into three parts. Part one traces Horace Tate’s education and early career as an educator in the 1940s and 1950s. Tate’s education at the university-level occurred both within the classrooms of Fort Valley State University as well as in his job as a student driver for the university’s famed president, Horace Mann Bond. Tate would later become the first African American to earn his PhD from the University of Kentucky in 1961; however, his formative educational experiences occurred at Fort Valley. It was there that Tate not only developed an interest in education as a vocation but also acquired the tools and strategies to continue the fight for educational equity that earlier African American educators like Bond had begun. Tate later drew upon those experiences as a teacher and administrator in Greensboro, Georgia and at age twenty-two, Tate became the principal of Greensboro’s African American high school.

In parts two and three, Walker then shows how Tate and other African American educators worked behind the scenes through African American teachers organizations to fight for educational equity. During his tenure as principal in Greensboro, he became embedded within the network of the Georgia Teachers and Education Association (GT&EA) and developed a close relationship with the organization’s president, Charles Harper. At times, under the cover of night, Tate met with Harper in Atlanta. Indeed, the GT&EA offices in Atlanta served as a nexus for organizing African American educators working in rural Georgia. The city’s offices provided a safe space for the dissemination of legal support and advice to schools, communities, individuals throughout the state. Moreover, Harper’s expertise as a former principal of Booker T. Washington High School in Atlanta – the city’s first high school for African Americans and the first such high school in the entire state – proved invaluable and well worth the long drive to the city. During this time, Tate also became a representative to the National Council of Officers of State Teachers Association (NCOSTA). Though African American teacher organizations like the GT&EA and the NCOSTA mirrored the segregated white teachers’ organizations in structure, their aims were often quite different with a focus on labor and educational equity for African American students and teachers. While the leadership of GT&EA organized African American educators on these issues within Georgia, NCOSTA brought together African American educators from throughout the southern United States to collaborate on those same issues across state lines. These organizations also surreptitiously supported the National Association for the Advancement of Colored People (NAACP) as they litigated cases at the local, state, and federal level. And as Walker recounts, these connections between the teacher organizations and the NAACP were intentionally kept from the public eye in order to protect African American teachers and administrators from retribution – including violence.

In addition to illuminating  the particular contours of Tate’s career and impact, The Lost Education of Horace Tate should challenge future scholars to seek out the voices and experiences of individuals who worked behind the scenes in the fight for educational equity.  Even as scholars such as Jeanne Theoharis have called for scholars to study civil rights struggles beyond the South,4 Walker’s book demonstrates the potential for future research within the region. In particular, it serves as a provocation for scholars to consider the individuals who have been hidden, sidelined, and de-emphasized in previous studies of the South. Though their stories may be less accessible to researchers, as Walker’s account makes clear, understanding the role played by individuals such as Horace Tate ultimately provides us with a far more robust understanding of the movement’s origins and the full range of individuals who were engaged in activism. Moreover, the book also has great relevance for anyone interested in continuing the fight for equitable education today.  By offering a window into how individuals and communities organized behind the scenes to challenge the many modes of white supremacy in education, Walker has broadened our understanding of what educators did in the past and, more importantly, can do in the face of overwhelming educational oppression today. Unfortunately, such an understanding has become more and more relevant for educators living and navigating the current moment in the United States.