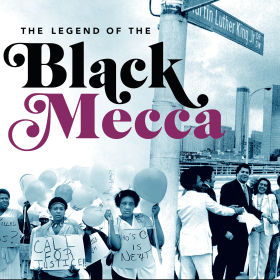 Book Review: The Legend of the Black Mecca

In unapologetically foregrounding the intraracial significance of socioeconomic class, Maurice Hobson has broken fresh ground with The Legend of the Black Mecca: Politics and Class in the Making of Modern Atlanta.

Seeking to provide readers with a “critical response to current trends and tensions” in the historiography of Black urban lives, Hobson has interrogated the notion of Atlanta as Black Mecca by employing archival records, oral history interviews, and judicious use of certain quantitative methods such as mapping and demography to reveal that some of the singular triumphs of its Black electoral political elite have taken a profound toll on the Black working poor (7). Those familiar with the history of the post–Civil War South know that Atlanta Constitution editor Henry Grady championed the notion of a “New South” staked to industrial development and outside investment during the late 1880s. Of course, this rhetoric of a New South belied the reality of racist terrorism and exploitation, establishment of apartheid structures throughout the region, and relative exploitation of poor Whites. In an intriguing contemporary recasting of the term, Hobson argues for consideration of Atlanta as the “beacon of a black New South” staked to concentrated Black electoral political power, beginning in the early 1970s as the city’s population comprised a Black majority for the first time (50).

This key demographic shift helped land Maynard Jackson the mayoralty in 1973. Boosterism had changed in a fundamental way, with Black elected officials now taking center stage as spokespersons; however, the end result was largely the same, with White business elites profiting and working-class and poor Blacks gaining next to nothing from it.

In The Legend of the Black Mecca, Hobson highlights several key flashpoints for studying intraracial socioeconomic class tensions in Atlanta following its emergence as a majority Black city. The first such flashpoint was the 1977 sanitation workers strike. Jackson, who had been elected due to a groundswell of support from working-class Blacks, now took a hardline against striking AFSCME employees, a move that garnered support from White business leaders and conservative members of the Black political elite such as Martin Luther King Sr. However, during the month-long 1970 sanitation strike, as vice mayor, Jackson had supported efforts by workers to earn a living wage, a decision that earned him no friends in the business community or among established Black leaders. The second flashpoint was the Atlanta Child Murders tragedy that engulfed the city and nation from 1979 to 1982. The thirty victims were among the most vulnerable of Atlanta’s citizens: poor Black children and young adults. Moreover, the mayor’s initial inaction on behalf of beleaguered parents and their communities was exacerbated by the optics of the Jackson family affording around-the-clock security for its young son. As a result, as Hobson notes, “Jackson became a target of contempt and ridicule” among less privileged Blacks (99).  Camille Bell, mother of victim Yusef Bell and a co-founder of the Committee to Stop Children’s Murders in 1980 sought to explain the growing sense of neglect that she and other parents felt, declaring, “I know that it can’t be because we’re black . . . It is because we’re poor!” (104).

A third flashpoint for intraracial class conflict treated in The Legend of the Black Mecca was the drive to land the 1996 Centennial Olympiad in Atlanta. Mayors Andrew Young and Maynard Jackson worked closely with members of the city’s largely-White business elite, led by attorney and investment banker Billy Payne, to make a formal bid for the Games. As a result of this interracial collaboration, “the chief executive officers of BellSouth, the Coca-Cola Company, Delta Airlines, and Georgia Power” were all among the notable power players who lent their resources and connections to help garner a successful bid (203).

Atlanta became the first city to win an Olympic bid on the first attempt, cementing its place as a truly international city. However, this feat came with multiple repercussions, not the least of which was the displacement of tens of thousands of poor Blacks from neighborhoods such as Summerhill, which had been the site of violent Black Power–era protest in 1966.1 In the wake of such displacements, grassroots activists and community residents such as Dorothy Bolden became increasingly outspoken, “again asserting that the legend and lore of the black Mecca was perceived as the city’s white business elite in blackface” (201).

This condemnation resonated strongly with so many working-class and poor Blacks because the Centennial Olympiad represented the culmination of two decades worth of concessions to business interests, including the militarization of the police, which benefitted middle-class Atlantans but dogged its poorer Black majority. As Hobson argues,

Atlanta’s facelift came at the cost of the black working poor and homeless, who were frequently criminalized, segregated, and further marginalized along class and racial lines (203).

In what is the most significant contribution of The Legend of the Black Mecca, Maurice Hobson mines the trove of Atlanta’s Black cultural scene to capture, in its essence, the profound sense of disaffection with the city’s Black leadership elite expressed in works produced in the 1990s. Specifically, Hobson successfully illuminates the critique provided by groundbreaking Hip-Hop producers and artists such as Organized Noize, OutKast, and Goodie Mob. These groups incorporated core cultural elements found in the urban Black South, including its particular idioms, cadences, and gospel influences, in what Hobson has termed a place-based form of rap music. In doing so, OutKast’s 1994 debut album Southernplayalisticadillacmuzik and Goodie Mob’s 1995 debut album Soul Food embodied a new trajectory in Hip-Hop beholden to neither the East or West Coast. Of particular note on the Soul Food album were two songs, “Dirty South” and “Thought Process.” Intent on reminding those outside of Atlanta of the persistence of structural racism in the city, Goodie Mob member Robert Barnett asserted that “Dirty South” described Atlanta “as a racist stronghold where the confederate flag still waves for ‘good ole boys and slavery’” (240). “Thought Process” presented a vivid picture of illegal underground economic activities, police violence, and the daily struggles of life in Southwest Atlanta, or “SWATS.” The song also referenced the drive by elite forces to build the $56 million jail that was first used to temporarily house homeless people during the Olympics, as well as the hypocrisy epitomized by the multimillion-dollar corruption scandal involving business leaders and elected officials. Ironically, it was the very members of that elite leadership class they railed against – particularly Maynard Jackson with the establishment of the Bureau of Cultural Affairs in the 1970s, and former first lady Burnella “Bunnie” Jackson-Ransom with the promotion of R&B and funk artists such as the S.O.S. Band and Cameo during the 1980s – who helped lay the foundation for the eventual rise of rap music in the city.

In some ways the late-twentieth-century working-class cultural critique illuminated in the book resonates with the intraracial class tensions at the start of that century that Tera Hunter so skillfully chronicled in To ‘Joy My Freedom: Southern Black Women’s Lives and Labors after the Civil War. In her work, Hunter discussed the ways in which working-class Black women in Atlanta struggled to engage in social activities on their own terms, even if doing so challenged “respectable” middle-class cultural norms.  Now Maurice Hobson has demonstrated how nearly a century later, elements of Hip-Hop could speak truth to power and challenge the dominance of a politics of respectability. With the flames of Ferguson and Baltimore still fresh in our recollections, The Legend of the Black Mecca is a timely reminder of what examining the intraracial socioeconomic class divide can reveal for students of African American urban history.  Furthermore, the book opens up space for future projects that might address similar themes in other cities, as well as those that embrace the necessary challenge of doing work with an explicitly intersectional frame, which will foreground the ways in which gender and sexuality can serve as analytical frames of equal importance as race and class.