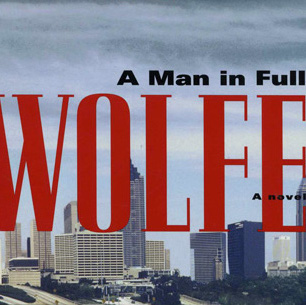 Tom Wolfe’s passing on May 14, 2018, received considerable attention in the US and international media.

Obituaries stressed his “neon-lit” or “technicolor” prose style; his contributions to New Journalism, including seminal nonfiction volumes like The Electric Kool-Aid Acid Test (1968) and The Right Stuff (1980); and the spectacular commercial success of his transition to fiction with panoramic New York novel The Bonfire of the Vanities (1987).1 Rather less prominent in these obituaries, however, was Wolfe’s fictional follow-up, A Man in Full (1998), which over the course of seven hundred-plus pages dissected the social forces at work in Atlanta. Those media outlets that did recall A Man in Full focused less on the book itself than the drama generated by negative reviews of it by three heavyweight rivals on the American literary scene: Norman Mailer, John Updike, and John Irving. According to Mailer – never one to shy away from a literary or literal fight – A Man in Full merely confirmed that Wolfe “lives in the King Kong Kingdom of the Mega-bestsellers.”2

It is now nearly two decades since A Man in Full’s publication and the ensuing, unseemly spectacle of four aging white male authors exchanging potshots across the bows of The New Yorker and New York Review of Books.3 It is worth remembering, then, that Wolfe’s second novel really was more than a merely literary event; it was a cultural and economic phenomenon, nowhere more so than in Atlanta. In the wake of the Olympics, canny local boosters figured that A Man in Full could bolster their branding of a “world-class city.” The Atlanta Convention and Visitors Bureau invited the man in the white linen suit to breakfast because “[w]e have a cultural tourism initiative in this city [and] Tom Wolfe is certainly a major novelist with a blockbuster book coming out.”4 Wolfe himself first became interested in writing about Atlanta partly because of the city’s shameless hawking of its economic development. In A Man in Full, black mayor Wes Jordan observes with no little wonder that the CNN Center, the Georgia World Congress Center, and International Plaza represent the will “to make Atlanta a world center, the way Rome, Paris, and London have been world centers in the past, and the way New York is today.”5 When Wolfe was researching his novel, this ambition (and arrogance) was most obviously embodied by real-life real estate developers like John Portman, Tom Cousins, and Charles Ackerman, all rumored models for A Man in Full’s protagonist, property magnate Charlie Croker. For Wolfe, the brash, expansive, often venal city that these men developed and dominated constituted ripe, uncharted territory for fiction: with considerable chutzpah of his own, Wolfe declared that,

there should be 25 or 50 novels about Atlanta by now. What are these novelists doing?6

Wittingly or not, with such statements Wolfe also tapped into long-standing anxieties within Atlanta that the city’s economic importance as a regional, national, and now global capital of capital conspicuously outstripped its cultural (in)significance. With honorable and arguable exceptions, no major novel about Atlanta had appeared since Margaret Mitchell’s Gone with the Wind (1936) six decades previously. That Wolfe was now following his magnum opus about New York with a mammoth new novel about Atlanta seemed to prove that the “international city” was finally making its mark culturally as well as financially. Yet Wolfe’s well-earned reputation as a savage satirist also generated provincial anxiety ahead of publication that belied the boosters’ bluster. The Buckhead Coalition, led by former mayor Sam Massell (who in 1971 coined the slogan “the world’s next great city”), withdrew Wolfe’s invitation to speak at its annual meeting when advance reports indicated that A Man in Full indulged in “Buckhead bashing.”7Such anxieties were not unfounded. Through the figure of Croker – Buckhead resident, former Georgia Tech football hero, and self-declared south Georgia “cracker” – A Man in Full made considerable hay out of the dissonance between good-old-boy provincialism (including barely repressed racism) and Atlanta’s ambitions to become (and be seen as) a cosmopolitan “world center.” Yet there was much in A Man in Full to vindicate Atlanta’s boosters too: Wolfe’s vaulting “technicolor” prose vividly reproduced the razzle-dazzle – or as the novel puts it, “curb flash” – generated by mixed-use developments like Portman’s Peachtree Plaza.8 Not for nothing does Croker conceive of Portman, Cousins, et al. as “the Creators of Greater Atlanta” – and flatter himself that he is just such a Creator too.9To Wolfe’s credit, A Man in Full also descends from the towers of Downtown and Croker’s “edge city” development to explore the various forms of spatial and racial segregation that continued to permeate Atlanta. Much as Bonfire of the Vanities had mapped the dizzying divide between the “Masters of the Universe” in Manhattan and the poor nonwhite denizens of the Bronx, A Man in Full stressed (and in a sense crossed) the vertiginous chasm between Buckhead and English Avenue in southwest Atlanta, which in the novel is the birthplace of Georgia Tech’s latest football hero, Fareek Fanon.  Wolfe also registered – albeit through the eyes of a white escaped convict from California called Conrad Hensley – the tenuous status of Atlanta’s most truly “international” population: the southeast Asian immigrants eking out an existence, often illegally, in Doraville and Chamblee (“Chambodia” in the novel).

Wolfe’s city limits: race and gender in A Man in Full

Fortuitously for me, A Man in Full appeared when I was a year into my PhD. It was almost perfect fodder for my dissertation, which sought to challenge conventional understandings of the South’s (and southern literature’s) supposed “sense of place” – so often romanticized as rural or pastoral by critics who conveniently elided deep-rooted disparities along race and class lines, as well as the social reality of southern urbanism. A Man in Full thus became central to a subsection of my dissertation and subsequent book that focused on literary representations of Atlanta.10 Yet it was obvious that there were also issues with Wolfe’s depiction of the city – issues that became even more apparent within a year of A Man in Full’s publication. Wolfe’s familiar tendency (already evident in his first novel) to turn characters into cartoonish social types felt especially problematic in the case of his portrayal of black football star Fanon. (The allusion to anti-colonial theorist and activist Frantz Fanon was less “radical chic” than patrician smirk, and painfully unfunny to boot.) But in October 1999 the limitations of Wolfe’s depiction of black Atlanta were considerably amplified by the posthumous publication of Toni Cade Bambara’s unfinished, unflinching novel about the Atlanta child murders, Those Bones Are Not My Child. It is revealing that whereas Bambara was living in southwest Atlanta at the time of the child murders, Wolfe renders the area as part of a “lay of the land” limousine tour given by mayor Jordan to bourgeois black lawyer Roger “Too” White.11 As Bambara’s editor Toni Morrison observed,

You have Gone With The Wind . . . Then You have this Tom Wolfe novel book. And that’s Atlanta. Boom. Over . . . And I thought, ‘No, no no.’ No one is talking about Atlanta from the point of view of these people who knew it—not the political way, the way the marketers knew it, but on the streets, in the houses, in the schools.12

Whatever A Man in Full’s merits in interrogating the hype around Atlanta’s economic growth and alleged racial progress by including scenes dramatizing the endurance of segregation and inner-city decay, Bambara’s novel ultimately went far deeper into the experiences of Atlanta’s working-class black residents – as did Tayari Jones’ debut novel, Leaving Atlanta, a few years later.

I have taught A Man in Full at universities in England, Denmark, and the United States. Wherever and whenever I teach it, the novel polarizes student opinion: some love its irreverent humor and flamboyant prose, while others find those same characteristics patronizing and distracting. Some students praise the way Wolfe ranges across class, race, and region (lest we forget, significant portions of A Man in Full take place in Californian suburbs and on Croker’s south Georgia plantation); others lament its sometimes leaden shifts of social scene. If the characterization of African Americans like Jordan, White, and Fanon invariably generates classroom debate, so too does Wolfe’s depiction of women. Even Mailer, not exactly a noted feminist, observed witheringly that Wolfe “appears incapable of creating a vital and interesting woman.”13 Only Croker’s jilted wife Martha receives sustained attention, mainly because divorce and aging makes her “superfluous” (an adjective used three times in five pages, in a chapter entitled “The Superfluous Woman”). Martha is thus unable to compete with the unfailingly nubile young women who otherwise populate Wolfe’s Atlanta, such as Charlie’s second wife Serena, defined by her “lubricious crevices and undulating lamb chops” (nope, me neither), and Fanon’s alleged rape victim, eighteen year-old Elizabeth Armholster, whom sixty-year-old Croker admires for “the declivities of her loins fore and aft.”14

A few years ago, I tired of teaching A Man in Full: the last time I did so was in the spring 2011 semester, at the University of Mississippi. Still, Wolfe’s death at the age of eighty-eight and the twentieth anniversary of A Man in Full’s publication give pause to reassess the novel’s significance, not least in the ongoing saga of Atlanta’s creative destruction. In an influential analysis of John Portman’s Bonaventure Hotel in Los Angeles, Marxist cultural theorist Fredric Jameson stressed that Portman was “an artist who is at one and the same time a capitalist in his own right.” In A Man in Full, Croker regards Portman as “smart” for combining precisely those roles of artist/architect and capitalist/developer.15 However, the conflation of aesthetic and capitalistic production is not just a theme in Wolfe’s novel; it defined its form and own (mass) production too. Mailer’s comments notwithstanding, A Man in Full was not merely a “mega-bestseller”; the coming together of “King Kong” Wolfe and “the towers of Downtown and Midtown Atlanta” had fused art and commerce in a fashion almost eerily emblematic of what Jameson called “the cultural logic of late capitalism.” For readers (or consumers) of the novel across the nation and globe – the US hardback first edition print run alone was 1.2 million copies, on the back of a rumored $7.5m advance – Wolfe took his place alongside Portman as one of the millionaire “Creators of Great Atlanta.” For all A Man in Full’s flaws, its late author surely empathized with Croker’s grandiose take on his own role in the creation of “international” Atlanta:16

I did that! That’s my handiwork! I’m one of the giants who built this city! I’m a star!

Martyn Bone is an associate professor of American literature and coordinator of the Center for Transnational American Studies at the University of Copenhagen. His latest book, Where the New World Is: Literature about the U.S. South at Global Scales, was published by the University of Georgia Press in January.