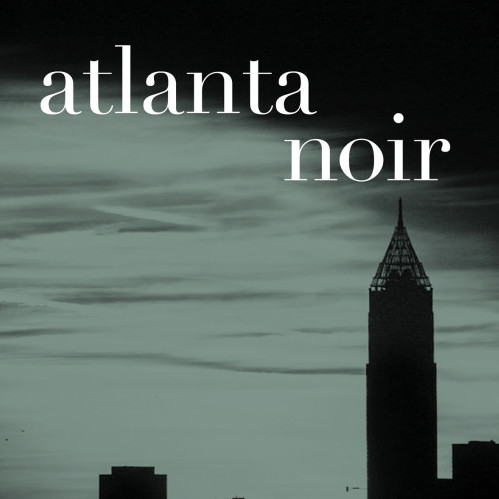 Our “city in a forest” stylistically makes an unlikely setting for a noir anthology, the green of the tree canopy distinguishing us from more classically grey noir cities like Los Angeles, New York, or Chicago.

Still, Atlanta Noir, edited by Tayari Jones, has joined around 100 other cities in Akashic Books’ ongoing apparently lucrative noir series. Few of the stories in the collection fit a strict definition of noir: there are no detectives and there are few mysteries to be solved. But the stories in Atlanta Noir are connected, as Jones suggests in her introduction, in “exposing the rot underneath the scent of magnolia and pine” (15). In particular, the “rot” these narratives expose are specifically Atlanta versions of gentrification, the suburbs, traffic, and inequality. At their best, the stories reveal and complicate a post–civil rights, but far from post-racial, Atlanta. Regardless of its contribution to the noir genre, this collection is noteworthy in terms of its multiple contemporary literary representations of our city, particularly considering the general lack of them otherwise.

The anthology begins with “Snowbound” by Tananarive Due, the title evoking the problems of Atlanta’s suburban sprawl and traffic. Early in the story, an older man in line at the grocery store laughs at frantic shoppers stocking up before a storm, “‘People here act like they’ve never seen snow,’ he said. ‘It’s not gonna kill nobody’” (20). Of course, these lines in the opening story of a noir anthology are more unintended soothsaying than pleasant banter, both for Atlantans who are about to experience 2014’s Snowpocalypse and for Monique who imagines she will safely work from her home in Buckhead. She quickly learns that her dream of suburban escape from the city has become a nightmare, first due to her difficulty navigating her yard and 3-story house with a broken ankle and then because “her house had a thousand places to hide” (34) Just as Monique feels increasingly cornered in her mansion, Atlanta commuters are stuck on the interstate, trapped by the infrastructure of a suburban dream. On top of her critique of Atlanta’s sprawl, Due layers commentary on the city as a Black Mecca. After a successful career in Los Angeles, Monique returns to Atlanta (having attended college here) to “finally indulge her desire to live in the Big House—wasn’t that the secret dream of every black child of the South?” (21). As Monique waits out the storm, she Facebooks with her sister-in-law, a professor at Spelman who also lives in the suburbs, in what we can reasonably imagine is another version of the Big House. They message one another with “My people! My people!” (27) commenting on Atlanta’s leadership mishandling the storm, self-consciously connecting and distancing themselves from Black Atlanta via the supposed safety of their position in wealthy suburban enclaves.

The second story, “Terceira” by Dallas Hudgens, continues exploring Atlanta’s sprawl, but moves the protagonist from the nightmare of being stuck in a McMansion to the nightmare of being stuck in traffic. Finney, a low-level delivery man for a gun running operation, has a flight to catch, but it’s clear from the very beginning of the story that it’s unlikely that he will make it to the airport. He wakes up hungover, not knowing where he is. When a woman he barely remembers from the night before gives him his location, he responds “‘What’s Johns Creek?’” (40). Finney finds out soon enough when she agrees to drive him to his car at Lenox mall — “traffic lights, strip malls, gated subdivisions, new high schools with perfectly groomed baseball fields. They passed a sprawling limestone compound surrounded by parking lots” (44).

Hudgens makes several jokes about Atlanta sprawl and car culture throughout the story, like an unmoving line of cars in a Starbucks drive-through with no wait inside. The story highlights how Atlanta’s anonymous spaces – sprawl, interstates, construction sites, and dead zones around the airport – are genre-appropriate settings for the shady business of noir. Hudgens also makes an interesting nod to film noir’s use of lighting with the car’s windshield offering a distinctively Atlantan filter to the proceedings while stuck in traffic – “The sun and pollen washed out the colors of the cars and trees. Everything appeared in a cataract haze” (44) – in what is perhaps a southern reversal of noir’s chiaroscuro technique to contrast light and dark. In this case, it is not shadow, but Atlanta’s pollen that blurs the view. Meanwhile, the plot’s slow journey to the airport includes several flashbacks to the protagonist’s past growing up in College Park, where he was constantly aware of planes overhead, symbols of escape that he still dreams of. But as the story makes clear, regardless of Atlanta’s massive interstates and the world’s busiest airport, he is going nowhere.

John Holman’s “The Fuck Out” and Anthony Grooms’ “Selah,” are two of the stronger stories in the anthology. Neither is exactly noir, though both reveal the “rot” inherent in gentrification. Blur, the main character of Holman’s “The Fuck Out,” has just returned home from prison and in the short time frame of the story several fights occur, or almost do, at what is apparently an informal bar. But the plot does not revolve around a particular crime and Blur’s recent prison time is only for parole violation. He is the fuck out of prison but is struggling with what it means to be free. Blur recognizes his dependence on his family and that they won’t be around forever. Looming even more inevitably is the gentrification of his mostly poor and working class African American neighborhood with whites calling the police because of trash and noise and neighborhood meetings organized by newcomers who have a new name for the area, early indications that Blur might be pushed the fuck out. Grooms’ “Selah” is set in long-gentrified Inman Park, the narrator an older resident scoffing at tourists on Segways and new Californian and New Yorker neighbors with their leafblowers and annual tour of homes. As a long-time resident of the neighborhood, he seems to have a clearer understanding than Blur of the boom and bust cycles of economic decline and gentrification. He also has a longer historical perspective, back to the racist aunt he inherited the house from (and apparently some of her beliefs) and even further to the Creeks who were there before there was an Inman Park or an Atlanta or even a Georgia. The plot revolves around his attempt find to shelter for a destitute mother and child, and though he seems to have progressive politics when it comes to gentrification, policing, and homelessness, he is the lead in a story that reads more like Edgar Allan Poe psychological horror than Raymond Chandler noir.

It’s unclear who is worse, Maddie who comes up with the plan to separate herself from the bubble of Peachtree City, or Emma who, while hesitant, clearly understands what she is doing and how she will benefit. Regardless, these privileged white girls from the suburbs will likely never be suspects in a murder investigation. Meanwhile, the narrator in Sheri Joseph’s “Kill Joy” is less conscious of her motives. An unemployed teacher struggling to pay her mortgage in East Atlanta, she does not have the same class privilege as Peachtree City teens. She now regrets buying the house when she had a stable job and small inheritance from her father passing. But with a neighbor like Joy Markham, she won’t be able to sell the house. Miss Joy is everything that white urban pioneers fear – poor, mentally ill, loud, angry, addicted, a chronic thief, with a messy yard. But in the story, the narrator finds Miss Joy a nuisance more than a danger, a threat more to her property value than herself. And though the narrator insists that she is an upstanding citizen, a former school teacher after all, as the title of the story suggests, she and her roommate are far more dangerous in the neighborhood than Miss Joy.

Several of the other stories in the anthology focus on class divisions within black Atlanta. “The Prisoner” by Brandon Massey plays with and disrupts a notion of the post-racial. Its protagonist, Payne, is an African American ex-con trying to make good as a handyman in Grant Park. His baby brother is renovating one of the massive Victorians in the neighborhood and lets Payne stay while he finds work, despite his boyfriend’s reluctance to have a former inmate in the house. The story begins with Payne passing an SUV with a broken window while out exercising. A white woman jogs past and “glanced his way but only smiled blandly, unconcerned at the sight of a tall, muscular, bald-headed black man running in her neighborhood. She might have even waved” (61). The plot follows Payne’s attempts to mentor his neighbor, Malcolm, an African American kid adopted by a wealthy white couple. Payne takes note of the apparently progressive racial climate of the neighborhood, but quickly learns that he will have to confront a menacing white authority figure if he is going to help Malcolm stay out of trouble. “Caramel” by the collection’s editor, Tayari Jones, moves from a love motel off I-285 to a TV preacher’s home in wealthy Cascade Heights to explore the wealth divide in Black Atlanta. Two former foster kids reunite to confront a former pimp turned reverend about his past. At one point, the narrator takes note that both she and the Right Reverend Dr. Lerome “Romie” Johnson live right off the same road, but are worlds apart – “This is something that never ceases to amaze me about Atlanta: whatever you can think of, there is a black person doing it – probably up and down Cascade Road. Crackheads, CEOs, and everything in between” (137). As the story reveals, however, the two might be even more closely related than Romie thinks.

Film Noir is known for its black and white visual style, but the book’s focus on only black and white characters feels off, particularly considering that few if any of the stories seem all that interested in Atlanta’s past and Atlanta’s present and future is much more than merely black and white. Though the main character in Gillian Royes’s “One-Eyed Woman” is from a wealthy Jamaican family and Jim Grimsley’s “Four in the Morning in the New Place” loosely revolves around a Dutch rock star’s apartment in Little Five Points, nothing in the book ultimately reflects the international diversity that has emerged in Atlanta over the last few decades. No stories take place in immigrant communities on Buford Highway or are about refugees in Clarkston. Yet those settings seem ripe for noir’s focus on alienation and striving against a hostile, uncaring world. Nevertheless, the best of the stories Jones has gathered in this collection expertly explore some of contemporary Atlanta’s major issues. Given the success of the larger Akashic series, perhaps an Atlanta Noir 2 could bring a wider and more representative array of voices to explore the “rot underneath the scent of magnolia and pine.”