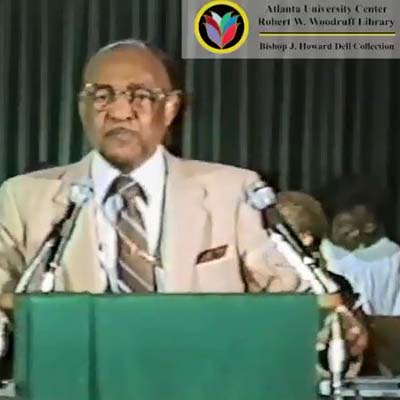 Spreading the Word: New Collections at the Atlanta University Center

The Archives Research Center at Atlanta University Center’s Robert W. Woodruff Library is pleased to announce the accessibility of fourteen collections of rare materials that document African American religion spanning from the 1880s to the 2000s.

These unique collections include correspondence, sermons and speeches, research files, photographs, and audio and video recordings. The collections document theologians and scholars, as well as Christian and Islamic ideologies. They were donated by educators and family that understood the importance of keeping the materials close to the community from where they were generated.

Thanks to a generous grant from the National Endowment for the Humanities, entitled Spreading the Word: Expanding Access to African-American Religious Archival Collections of the Atlanta University Center Robert W. Woodruff Library, the Library’s Archives Research Center and Digital Services Unit have digitized over 2,700 photographs, cassettes, and reel to reel audio and video formats. Almost 70 percent of these materials have been made available on the Library’s institutional repository, Digital Commons. The grant team prioritized these audio and video collections due to the inherent instability of magnetic media and the decreasing availability of playback equipment, a situation archives all over the country are currently facing.1

The library is fortunate enough to announce the availability of the following collections related to significant African American religious figures, with more becoming available throughout the following year. You can follow the progress of the archives in this project at our blog, or by using the libguide for the project. Any questions about the collections can be directed to the archives at archives@auctr.edu.

Anna E. Hall was an alumna of Clark University (later Clark College; now Clark Atlanta University) and was a missionary of the Methodist Episcopal Church in Liberia, Africa, from 1906 to 1931. Prior to her mentoring students at Clark College (Now Clark Atlanta University) she was the first African American to graduate from the New England Deaconess Training School in Boston, and became a deaconess and licensed minister in the Methodist Church. This collection consists of personal diaries, sermon notes, speeches, correspondence, newspaper clippings, and photographs, detailing her life’s work and missions. Other interesting items in the collection include a promotional booklet of photographs about the Liberia Garraway Mission where she worked, showing the buildings and school children on the compound, and scrapbooks documenting her activity with the schools of the Atlanta University Center and the Atlanta community.

Bishop J. Howard Dell was a Senior Bishop in the Church of God in Christ in Georgia, and was appointed Overseer of the Northern Georgia Jurisdiction. A pioneering minister, Dell broadcast his sermons from his pulpits in Macon, Moultrie, and Bainbridge, Georgia. He was reportedly the first African American to appear on television in Albany, Georgia beginning in 1958, and one of the first Blacks to telecast Sunday services in Atlanta, Georgia beginning in 1979. This collection contains over 600 video and audio tapes, reel-to-reel audio tapes, and photographs. Also within this collection are documents related to a highly contested split within the Northern Georgia Jurisdiction in the 1990s.

The Methodist Episcopal Church South was an outgrowth of Methodism, but some African Americans that were converted to Christianity by slave masters desired to have and control their own church. This desire led these formerly enslaved people who had been members of the Methodist Episcopal Church South to start their own independent religious organization, which was known as The Colored Methodist Episcopal (CME) Church. The denomination was renamed the Christian Methodist Episcopal (CME) Church in 1956. The Atlanta-Rome District CME Church consists of thirty-four churches in Atlanta and surrounding areas, all within Georgia – the Sixth Episcopal District. The collection includes programs from worship services, funerals, events, and church anniversaries; church histories; minutes from national and district annual conferences; and photographs.

James P. Brawley was the president of Clark College from 1941 to 1965. He wrote the history of the college in Clark College Legacy (1977), and served as President Emeritus on the college’s board of directors until his death. As President of Clark College, Brawley oversaw the moving of the college to its current location within the Atlanta University Center consortium. During his tenure as president, Brawley became a founding member of the United Negro College Fund, created a fundraising culture on campus, and saw several new buildings added to the campus, as well as the restructuring of class curriculum and the establishment of a pharmacy program. The college also expanded its land holdings, where an athletic field and a new academic building were built, and secured funds to build a president’s residence. By the end of his term as president, the college was operating on a surplus. Outside of his work with Clark College, Brawley was an active member of the Methodist Church. He served on the President’s Council of the Methodist Board of Education as well as several boards, commissions, and committees related to social action and concerns. He worked to integrate the church through the elimination of the Central Jurisdiction of the Methodist Church, the only racially organized Jurisdiction. It was made up of the African-American Annual Conferences and Episcopal Areas of The Methodist Church, and existed from 1939 until the Methodist merger with the Evangelical United Brethren Church in 1968. The collection contains correspondence, family papers, writings, memorabilia, and photographs. Of note within the collection are photographs featuring images and events Brawley’s life, and scenes around campus at Clark College.

Isaac R. Clark, lifelong member of the African Methodist Episcopal Church, was a professor and administrator, who served as Professor of Homiletics, Director of Field Education, Registrar, and Director of the Summer Session at the Interdenominational Theological Center (ITC) from 1962 to 1990. Clark’s collection reflects his long academic career through course materials, administrative records, and recorded presentations and class lectures. The recordings are of various chapel services and special programs at the Interdenominational Theological Center including a history of the ITC by Harry V. Richardson.

James H. Costen was a Presbyterian minister and educator who served as president of the Interdenominational Theological Center (ITC) from 1983 to 1997. Costen was a leader in a national movement to prevent the closure of Johnson C. Smith Seminary in Charlotte, North Carolina. The institution was the only historically black theological seminary of the Presbyterian Church (USA), when it was threatened with closure because of declining enrollment and financial problems. The seminary survived and was moved to Atlanta where it became part of ITC. Costen then served as dean of the ITC, and in 1983 he was elected president of ITC, a position he held until his retirement in 1998. He was a global churchman whose world travels included visits to Liberia, Cameroon, Ghana, the Ivory Coast, Russia, and Egypt. This collection of his personal and administrative papers will be made available soon.

Robert Penn was a member of the ITC faculty during the 1970s. A graduate of Clark College and the ITC, Penn was a Baptist pastor in Georgia, Kansas, and Indiana, and served as a chaplain during World War II. He was active in missionary efforts in Africa, and upon his retirement from preaching, he joined the ITC faculty as director of Field Education. This collection of materials document Penn’s work at ITC, and complements another collection of correspondence, sermons, audio recordings, and photographic materials available for research at Emory University’s Rose Library.2 Of particular interest in this collection at AUC are writings and correspondence during his time in World War II in which he speaks up for the equal treatment of Black chaplains in the service.

Husband and wife, Levi and Jewel Terrill, were long-time Baptist workers. Levi Terrell (1899–1971), a Morehouse graduate, was pastor of the First Bryan Baptist Church in Savannah, Georgia, and the Zion Hill Baptist Church in Atlanta. He was the president of the General Missionary Baptist Convention of Georgia (GMBCGA) from 1959 to 1971, and vice president of the National Baptist Convention USA (NBCUSA), the largest predominately African American denomination in the United States, from 1969 to 1971. Jewell Terrill, an Atlanta University Normal School graduate, served NBCUSA both locally and nationally in many capacities, including as Assistant Recording Secretary of the Women’s Convention Auxiliary of the NBCUSA, and president of the Women’s Department of the Atlanta Baptist Association. Of note in this collection are reports, land deeds, and correspondence relating to the creation and subsequent turmoil over the closing of Central City College in Macon, Georgia, that was organized by the GMBCGA.