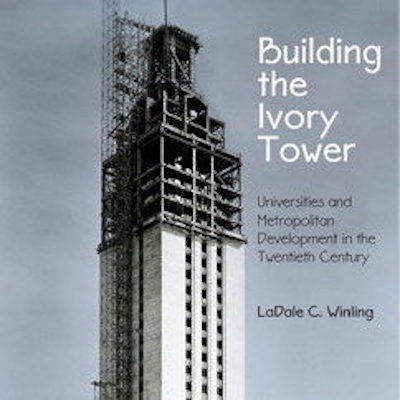 My morning commute takes me on a twenty-minute walk down Auburn Avenue on Atlanta’s eastside.

Heading through the historic Sweet Auburn neighborhood, a glance at the skyline reveals the unmistakable presence of a new urban developer in town. Since my arrival in the city this summer, I’ve watched the letters “GEORGIA STATE UNIVERSITY” be steadily erected across the top of the old Citizens Trust Co. Bank Building at 75 Piedmont Avenue. This bold signifier is the latest visual cue that GSU has assumed a leading role in the ambitious revitalization of Downtown Atlanta. After the city’s banking sector fled to the more-liberal regulatory environment of Charlotte, North Carolina, Georgia State has moved into the vacuum left at the heart of the urban core. In doing so, it has embarked upon a radical reshaping of the city in material, symbolic, cultural, and economic terms, which parallels its own institutional metamorphosis over the last few decades from night school to urban research university. The stability offered by the university as an “anchor institution” forms the basis of an urban regeneration model closely aligned with the demands of the ascendant “knowledge economy.” Enter the university as twenty-first century city-builder – laying foundations of concrete and human capital in equal measure.

The transformation underway across Downtown Atlanta emphasizes the timeliness of LaDale Winling’s new book, Building the Ivory Tower: Universities and Metropolitan Development in the Twentieth Century, a historical excavation of the turbulent relationship between America’s universities and the cities that they call home. Institutions of higher learning and scientific research have come to hold privileged positions in urban economic development agendas across the United States (and further afield). However, as Winling details, this policy zeitgeist is one that has been a long time in the making. Observing the longue durée of the twentieth century, Winling’s goal in Building the Ivory Tower is to redress the previously marginal role afforded universities in American urban history.

Building the Ivory Tower approaches this objective through a loose periodization. After a short introduction, five case study chapters each focus in on a particular institution during a particular epoch of American history in order to illustrate how shifts in American society and political ideology prompted the creation of new educational spaces. Chapter 1 details how the growth of Ball State University prompted a dramatic socioeconomic transformation in turn-of-the-century Muncie, and the resultant formation of new, segregated geographies of class and race in the industrial city. Chapter 2 explores the impact of the New Deal and Cold War defense spending on the institutional and (decentralized) spatial development of the University of Texas and city of Austin. Chapter 3 moves to south Chicago, where the University of Chicago embraced urban renewal as a means to access federal largesse and ensure the institution was buffered from incursions by the city’s expanding Black Belt. Chapter 4 examines the 1960s and 1970s student upheavals at the University of California-Berkeley to illuminate the contradictions found in “the Faustian bargain of twentieth-century development” (11). Finally, chapter 5 charts the development of the entrepreneurial university in the latter half of the twentieth century through an analysis of the divergent spatial strategies adopted by Harvard and MIT in metropolitan Boston.

Callbacks, conceptual leitmotifs (notably issues of race and gender dynamics), and material connections help integrate these diverse chapters into a cohesive narrative. For example, Lyndon Johnson’s political maneuvering to wrest NASA research facilities from Massachusetts to Texas intertwined the academic and urban futures of Austin and Greater Boston, establishing distinct urban and economic development trajectories for both places. Elsewhere the consultancy travels of University of Chicago professor and urban renewal advocate Julian Levi offer an excellent example of mid-century urban policy mobility by demonstrating how “innovative” planning regulations empowered the University of Chicago and MIT to impose their specific urban visions onto their surrounding neighborhoods.

There is much in Building the Ivory Tower that will resonate with those attuned to the urban development roles of Atlanta’s higher education institutions. The dance of university expansion and municipal annexations in Austin through to the 1960s evokes Emory University’s recent successful bid to be annexed into the City of Atlanta (and with this, poses questions regarding the provision of municipal services and city resources). Likewise, the close connections between universities and America’s military-industrial complex, which as Winling notes reshaped the social and morphological geographies of Austin (chapter 2), Chicago (chapter 3), and Boston/Cambridge (chapter 5), suggest that Georgia Tech’s interest in building a $63 million branch on the Lockheed Martin campus in Cobb County will likely have far-reaching consequences for Greater Atlanta. And returning to my walk to work, the evolution of Kendall Square into a hub of university-led innovation was catalyzed by MIT’s move into an area vacated by the collapse of large-scale industrial manufacturing adjacent to the campus. Only time will tell if GSU’s inhabitation of Atlanta’s corporate headquarters can spur an urban-economic transition akin to that in Cambridge.

The key insight of Building the Ivory Tower, though, is the contradictory role played by universities in improving American society at the same time as they reinforce inequities and injustices including blight, racial segregation, and poverty. As Winling puts it: “these institutions reproduced American society – the problems and promise – as they sought to create it anew” (13). This argument itself is not new. No less an urbanist than Henri Lefebvre himself was profoundly influenced by the contradictions of French society internalized within the university as he watched the 1968 student uprising from his office window at the University of Nanterre.1 Yet Winling’s re-articulation of this thesis provides a judicious rejoinder to the bullish embrace of universities as essential drivers of twenty-first century urban success. As such, his book poses deep questions regarding the politics, and future, of the university – an institution which, through the twentieth century, has served as a progressive bastion of academic freedom, a locus of social protest, and a beachhead in the struggle for racial integration, while simultaneously providing an intellectual breeding ground for neoliberalism, and a testbed for the commodification of knowledge.

Historians of American urbanism and students of higher education policy will be rewarded by the finely-crafted story Winling weaves throughout Building the Ivory Tower. His portrait of the multi-faceted role of university leadership in urban political and development agendas – sometimes benevolent, sometimes Machiavellian – shines an important light on an overlooked set of institutional relations that have come the shape university campuses as vital city spaces. Students of urban studies and those with an interest in metropolitan development, however, will likely be left slightly unsatisfied. Winling effectively locates the university at the heart of societal transformation, but because the actual dynamics of urban and metropolitan development remain undertheorized, he is less successful in illuminating how these processes prompt institutional restructuring.

In his brief epilogue, Winling points to the emergence of “multinode metropolitan regions” and asserts that universities are “a key reason for this growing set of interlocking communities expanding at the periphery and densifying at the center” (185). With a passing note, he suggests urban scholarship has yet to adequately explain these intertwined dynamics. This, however, isn’t quite accurate. A rich, historically-informed urban studies literature – for example, Edward W. Soja’s seminal Postmetropolis2 has utilized Lefebvre’s own work to strongly theorize such “implosion-explosion” dynamics in the United States and beyond. Indeed, taking seriously the question of how urbanization processes inform the spatial, economic, and cultural demands being placed on higher education institutions is increasingly vital as many (post)metropolitan regions – including Atlanta – must now to come to terms with the ongoing suburbanization of race, poverty, and opportunity.

This is a university-centric history which, despite the author’s claims (12), deploys a largely top-down institutionalist perspective. The book’s focus on a select few elite universities, by necessity, omits the experiences of other less glamorous institutions. Given Winling’s goals, the absence from the narrative of “urban grant” universities, which sought to urbanize the principles of America’s land-grant universities during the postwar era, is particularly noticeable. Referencing the political debates surrounding urban grant university legislation between the 1950s and 1980s would have provided an invaluable frame in which to situate a discussion of universities as producers of both urban space and urban knowledge. Such debates had a prominent advocate in Atlanta, with then-Mayor Andrew Young imploring universities in cities “to do for urban America what state universities did in the last century for rural America.”3 In the context of Building the Ivory Tower, schools including the University of California, Irvine, the University of Illinois at Chicago, and the University of Massachusetts Boston not only embraced “the city” as an institutional mission, but fundamentally contributed to metropolitan development in California, Chicago, and Greater Boston in ways that both correspond to and contrast with the universities Winling foregrounds. Federally-funded urban observatories and research centers that rose to prominence in the 1960s and 1970s, likewise, receive short shrift, with only one reference made to the Harvard/MIT Joint Center for Urban Studies (163). Here, Sharon Haar’s study of the University of Illinois at Chicago provides an important complementary account of American university urbanism, especially when read against Winling’s own assessment of the University of Chicago.4

Despite these omissions, Building the Ivory Tower offers plenty of food for thought. Winling argues at the outset that the “production of knowledge require[s] the production of space” (2). As universities build cities, they tend to do so in their own image. The essential provocation posed by this thoroughly-researched history is ultimately what sort of university, and what sort of city, do we want to build (for) the twenty-first century?