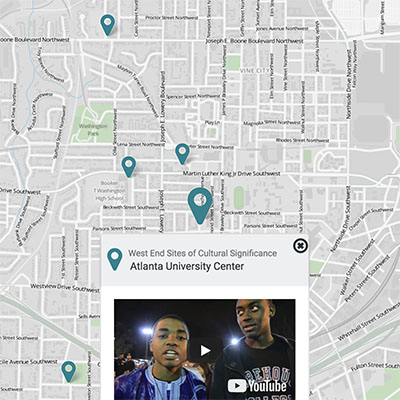 Re-examining the West End with ATLMaps

During the annual trip to Selma, Alabama, for its Jubilee celebration, members of the African American Male Initiative (AAMI), a program at Booker T. Washington High School in partnership with Georgia State University focused on young males’ college and career readiness and attainment, decided to document their trip.

Through social media and film, these young men archived Selma through their eyes. This first digital media project led to an intense interest among the young men in this form of communication. Through social media and film, the young men felt able to express their feelings and newfound knowledge about moments in black history while making comparisons to their present-day observations. Armed with this new knowledge and interest, AAMI then applied for the State Farm Youth Advisory Board’s grant to expand their work within this field. In their application, the group proposed creating three documentaries – one on the history of their high school, Booker T. Washington High School, another offering an inside look at their community, the West End and surrounding areas, and a third on the contributions of African Americans throughout the Southeast as witnessed during the group’s travels.

In their first documentary, Booker T. Washington High School: How We See It, AAMI presented the negative perceptions some hold about the West End community and identified a real and immediate need to define their community for themselves. Having completed their first documentary about their school the young men felt empowered to produce more video content about their community, which they felt has been misrepresented in conversations about the Atlanta metropolitan region for many years. Specifically, the young men in AAMI identified four locations in the West End that they felt were of personal and/or cultural significance to the community – Mr. Everything, Fire Station No. 16, West End Mosque, and the Atlanta University Center. They then produced video vignettes for an ATLMaps layer that document the current and historical significance of these West End locations and the surrounding communities via interviews with local community members and leaders.

The ATLMaps project serves as a valuable platform for highlighting Atlanta’s rich history and its citizens’ contributions to the community at large. Using this platform, AAMI was able to produce concise and informative videos for wide audiences – in and outside of the West End community – in hopes that others will recognize the value of the neighborhood.