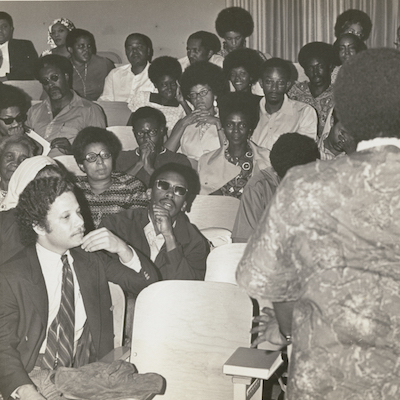 In the August 1971 issue of Ebony Magazine, which examined the South after the civil rights movement, editor John H. Johnson explained,

Today with the legal maneuvering almost complete and the long-sought civil rights laws firmly on the records, many blacks are looking backward to the land of their birth. They are wondering what the South is really like today. 1

Though the issue featured a wide range of contributions, its centerpiece was journalist Phyl (Phyllis) Garland’s “Black Mecca of the South,” on Atlanta. The article examined African American business, educational, and religious developments, concluding that black Atlantans were positioned to lead in the emerging post-civil rights movement era.2 In her discussion of Atlanta’s black colleges, Garland briefly mentions “Dr. Vincent Harding’s Institute of the Black World.” Though the article never mentions the Institute’s purpose, the IBW was central to the formation of Atlanta as a black intellectual Mecca in the 1970s.

Vincent Harding, then a professor at Spelman College, Stephen Henderson, a professor at Morehouse, and other scholar-activists had founded the Institute of the Black World in 1969 to use their minds “in the service of the Black community.”3 Six months after Martin Luther King, Jr.’s assassination, Harding, Henderson, and other Atlanta University Center (AUC) faculty members had first proposed the creation of The W. E. B. Du Bois Institute for Advanced Afro-American Studies, which sought to institutionalize Black Studies at the AUC.4

But Harding’s promotion of Black Studies failed to take root at the AUC, and the renamed Institute of the Black World joined forces with the Martin Luther King Center in the spring of 1969. However, the IBW eventually also separated from the MLK Center in 1970 because of ideological differences. Thus, by the time Garland mentions the IBW in her 1971 article on Atlanta, the IBW was fully independent of the AUC colleges and the King Center and ready to chart its own path on Atlanta’s activist landscape. During its existence the members of the IBW evaluated black studies, formulated a black political agenda for 1970s elections, and mediated ideological splits among black activists that occurred in the mid-1970s.

Unfortunately, the exploits of the IBW remained only vivid memories for its members and others influenced by the organization, leaving a scholarly void. Like Garland’s passing reference, the IBW, by the late 1990s, was an ephemeral recollection.

My book The Challenge of Blackness traces the history of the IBW from its founding in 1969 to its close in the early 1980s, detailing how Vincent Harding encouraged an amazing collection of intellectuals, activists, and artists to affiliate with the IBW. The list of people who supported, planned, organized, and wrote on behalf of the IBW included Katherine Dunham, Ossie Davis, Margaret Walker Alexander, St. Clair Drake, John Henrik Clark, C. T. Vivian, C. L. R. James, Walter Rodney, Ella Baker, Sylvia Wynter, George Beckford, Lerone Bennett, Joyce Ladner, and many others. As I argue in The Challenge of Blackness, the depth and variety of scholar-activists at the IBW made it the greatest collection of black intellectual talent in post–World War II America.

Despite the IBW’s ability to organize such a wide array of scholar-activists around its concept of black activist think-tank, few scholars have thought of Atlanta as a black intellectual community on par with Harlem of the 1920s, Chicago of the 1930s, or the professors that defined Howard University in Washington, DC. However, this oversight has slowly begun to change. More recently, Aldon D. Morris’s The Scholar Denied and Maurice Hobson’s The Legend of the Black Mecca have begun to correct this oversight. Morris’ examination of W. E. B. Du Bois’s Atlanta University School of Sociology and the Atlanta Conferences is vital to understanding the Vincent Harding’s inspiration to create the Institute of the Black World in the Atlanta University Center a half-decade later. And Hobson’s forthcoming book, which focuses on the mid-1970s through the 1996 Olympics, shows the intellectual vacuum that occurred after the IBW’s closing in the early 1980s. Radical race and class analysis was rare in the aftermath of the institute, and hip-hop, as Hobson shows, fills this critical space.

The IBW’s independence from the AUC and the King Center allowed it to fully embrace its identity as an activist think-tank, and to develop an ideology of “pragmatic black nationalism,” which permitted the institute to work with a variety of organizations interested in improving black communities and lives.5 The IBW began in the aftermath of the black studies movement, but grew to influence black politics, diasporic and local, in the 1970s. While the IBW’s work in black studies has received considerable attention from scholars such as Stephen Ward and Peniel E. Johnson,6 there are two other areas in which the IBW worked that signal its position as the hub of an intellectual mecca: its engagement with radical diasporic intellectuals, and its promotion of black elected officials.

An independent IBW reached out to leading Caribbean intellectuals, thus thrusting the organization into diasporic politics. For instance, during the 1971 Summer Research Symposium, the IBW invited C. L. R. James, Edward Kamau Braithwaite, Robert Hill, and George Beckford to Atlanta. These Caribbean scholars gave lectures and led classes around the theme of “The Role of the Black Scholar,” but the symposium also thrust the IBW into anti-colonial politics.

Despite the academic nature of the symposium, the IBW drew the unwanted attention of the United States government in the form of the FBI’s Counter Intelligence Program (COINTELPRO). The FBI’s program had targeted Black Power organizations to “expose, disrupt, misdirect, discredit, or otherwise neutralize” black nationalist organizations.7 and the anti-capitalist and pro-black politics of the invitees put the IBW in their crosshairs. The IBW’s symposium included West Indian intellectuals who had been contributors to radical politics in the region. Thus, when the IBW selected diasporic intellectuals that were known to government surveillance agencies, the FBI labeled it a “Black Nationalist Hate Group.”8C. L. R. James was a long-time Marxist who had participated in anti-colonial and anti-racist organizing in the Caribbean, Europe, and in the United States. Braithwaite had pioneered the Caribbean Artist Movement and the journal Savacou, while teaching at the University of the West Indies-Mona (UWI). Hill, a graduate student, and Beckford, a professor, were also based at the UWI. Both rallied in support of Walter Rodney against his excommunication from Jamaica in 1968. In addition, Hill, Beckford and others also founded Abeng, a newspaper that examined the “state of society” in Jamaica.9 As a result of these lecturers, the FBI viewed the institute’s academic symposium as deeply radical and believed the international Black Power Movement had arrived in Atlanta via the IBW.

But the IBW’s intellectual network refused to cower, and confronted government agencies trying to disrupt its work. For example, when United States immigration officials refused to grant West Indian Marxist economist George Beckford a visa “under any circumstances,” the IBW’s leadership used all of their contacts in order to secure him entrance documents.10 And though he arrived at the 1971 symposium a mere two hours before it ended, once in the country, Beckford met with Harding and Robert Browne, founder of the Black Economic Research Center in Harlem, about creating an international network of black research centers. While such collaborative plans never materialized, the IBW nonetheless made them possible to consider in the first place through their insistence that Caribbean radical intellectuals had an intellectual home in Atlanta.11During this period the IBW also worked with and supported Guyanese radical historian Walter Rodney. At the 1974 Summer Research Symposium Walter Rodney gave a masterful series of lectures on the politics of Africa and on racism and capitalism. After spending the summer in Atlanta, Rodney was set to teach at the University of Guyana, and was helping organize the Working People’s Party (WPA). But, when he arrived in his native land he discovered his teaching appointment had been cancelled under pressure from Guyana’s dictator, Forbes Burnham. Subsequently, the IBW supported Rodney and his family in a number ways, such as organizing lectures and short-term teaching positions. When governmental violence threatened Rodney’s family, they relocated to Atlanta, which is currently home to Walter Rodney’s wife, Patricia Rodney and the Walter Rodney Foundation.

The IBW’s work with Maynard Jackson was perhaps the clearest example of the IBW operating as an independent activist think tank, which meant that the institute specifically engaged in the crafting of policy ideas, but from the perspective of the activist communities that emerged from the civil rights and Black Power movements. The institute played a crucial behind-the-scenes role in helping Maynard Jackson win the 1973 mayoral election. The IBW leadership, and especially political scientist William “Bill” Strickland, had a long relationship with Maynard Jackson. Strickland and Jackson were friends when the latter attended Boston University Law School in the late 1950s, and Maynard Jackson often sought Strickland and the IBW’s political advice. The IBW helped Jackson formulate a political agenda that attempted to address the needs of Atlanta’s black communities. For example, the institute drafted Jackson’s press release regarding the Attica prison rebellion in 1971. The IBW connected Attica to the broader “urban crisis.”12

And during Jackson’s run for mayor in 1973, the IBW wrote several drafts of his speeches.13While the IBW was initially optimistic about Maynard Jackson’s leadership ability and potential, they were ultimately disappointed when Jackson fired striking sanitation workers in February 1977.14 Maurice Hobson’s forthcoming book captures Jackson’s inability to address the needs of Atlanta’s working poor. Unfortunately, the IBW failed to offer a public critique of him at the time, in part, because the organization was struggling with tremendous financial difficulties. Additionally, key members were no longer living in Atlanta, which constrained the unified voice that the organization had spoken with at the beginning of the decade.

Though the IBW would close its doors in the mid-1980s, its legacy remains evident in Atlanta today. The Walter Rodney Foundation keeps the institute’s Pan-African legacy alive. For the last fourteen years, the foundation has hosted the Walter Rodney Symposium. Second, the black studies tradition can be felt throughout the AUC. Faculty and the IBW members such as Clark Atlanta’s Mack Jones, now retired, trained numerous students. The current chair of Clark Atlanta’s Department of African American Studies, Africana Women’s Studies, and History, Stephanie Y. Evans, was a student of William Strickland at the University of Massachusetts.

One future goal should be to recreate the dynamic independent intellectual space embodied by the IBW. Atlanta is the ideal location, because of the very factors Garland outlined forty-six years ago. The city is home to thriving business, political, and educational sectors. But there is a need for the perspective of independent black intellectuals on a variety of issues currently facing these sectors in Atlanta and the nation. More importantly, the IBW’s legacy of collective and pragmatic scholarship provides a model for creating a space that is both inclusive of differing approaches to contemporary racial issues, and also attentive to how race, class, gender, and sexuality intersect. Ultimately, the IBW might serve as a model for making Atlanta a black intellectual mecca once again.