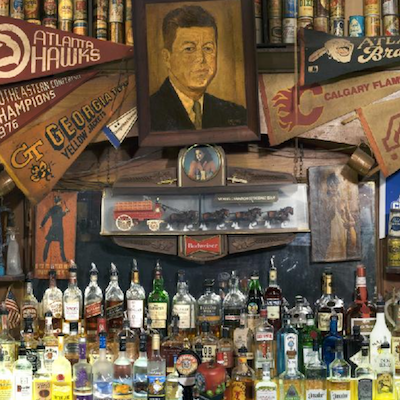 “despite its reputation as the capital of the South, there are surprisingly few places left in Atlanta that evoke something of that region’s rich and sometimes eccentric character.”1 Schmidt’s assessment of our city is perhaps even more accurate today than it was back then, yet Manuel’s Tavern, widely known as “Atlanta’s quintessential neighborhood bar,” has remained a notable exception to the metropolitan area’s continued veneration of the new.2 Over the past sixty-plus years since the tavern opened, its walls have even become an organic archive of the many notable communities that have called Manny’s “their” bar at various points, from cops and college professors to journalists and politicians – and even a Shakespearean troupe for a while. The histories of these groups might not be preserved in formal archives, but they are haphazardly recorded on the tavern’s walls.

We are excited to announce the unveiling of Unpacking Manuel’s Tavern, a digital project that seeks to both preserve the unintentional archive of this storied local institution contained on those walls and highlight the objects themselves and their backstories. Using a unique combination of cutting edge digital technologies and platforms, the site allows allows users to engage with each wall via exceptionally detailed state of the art gigapan photographs in which you can zoom in close enough to even read framed articles, browse or search the tavern item by item, and even tour the space itself via 360 degree panoramas or experience a virtual Manny’s. This multi-faceted project is the work of a wide-ranging team and comes out of a collaboration between the Atlanta Studies Network, Emory University’s Center for Digital Scholarship, and Georgia State University’s Center for Excellence in Teaching and Learning and University Library, with additional contributions from the Savannah College of Art & Design in Atlanta and the Center for Public History at the University of West Georgia.Veteran journalist Christiane Lauterbach once proclaimed: “Show me an individual who has never been to Manuel’s Tavern, and I’ll show you someone who doesn’t really know Atlanta.”3 Even after a 2015-2016 renovation, the tavern remains an essential Atlanta landmark. There is still nothing quite like going to Manny’s itself, but thanks to Unpacking, now you can get to know the Atlanta recorded on the tavern’s walls from your own screen.

Join us to celebrate the launch of the new Unpacking Manuel’s Tavern website next Tuesday, August 29 at 7pm at Manuel’s Tavern itself. All are welcome, whether you are a new Atlantan interested in learning more about the rich history of the city that has gathered in places like Manny’s, or you are an old regular curious what this digital “unpacking” has all been about (and maybe even contribute a story or two for posterity). Your drinks are on you, but light appetizers will be provided by the Unpacking team.