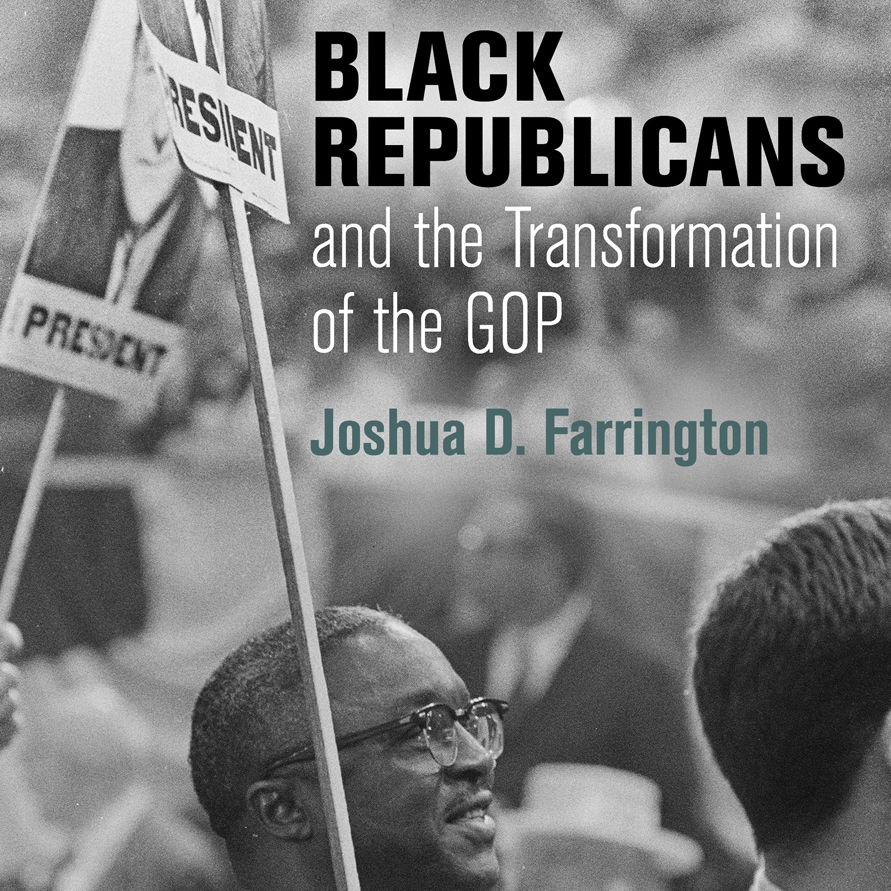 Book Review: Black Republicans and the Transformation of the GOP

Every four years or so, a black Republican rises to national attention and is greeted with surprise, curiosity, and sometimes disgust.

Colin Powell, Condoleezza Rice, Herman Cain, and most recently, Ben Carson, evoke questions that challenge popular assumptions about race and American politics that seem entrenched and immutable. But in Black Republicans and the Transformation of the GOP historian Joshua Farrington shows us that many of the assumptions we hold about blacks in the Republican Party today obscure a long history of black Republicanism in the post-World War II political landscape. Farrington tells a story in which black Republicans were far from marginal within African American politics or the Republican Party. In doing so, Farrington joins a chorus of scholars including Leah Wright-Rigueur and Corey D. Fields who have challenged the marginalization of black Republicans in historical and political narratives.1 And by taking a “wide-angle view” and focusing on black Republican activism at the state and local levels, Farrington adds further depth and nuance that illustrates the contingency and contradictions of black politics during the long civil rights era. These contradictions are particularly palpable in Atlanta – which serves as a significant site of analysis in the text – where the history of black Republicanism belies easy distinctions between liberalism and conservatism in the city’s black politics.

Farrington begins this narrative just as African Americans were beginning their exodus from the Party of Lincoln to the Party of Roosevelt during the 1930s New Deal era and describes how black Republicans active in national politics and in local interracial “Black-and-Tan” parties pushed the GOP to respond to the Democratic Party’s New Deal – which many black Republicans contended was “an invitation to go on welfare” (21). Black Republicans tried to position the Republican Party as the party of civil rights by advocating for fair employment legislation. Farrington describes black Republicans such as Robert Church of Memphis and John Wesley Dobbs of Atlanta as “savvy political operators who used their partisan affiliation to advance the goals of the civil rights movement” (5). While the national GOP was hesitant to adopt such policies as they sought to court anti–New Deal southern conservatives, Farrington shows that black Republicans were nonetheless successful in getting state and local Republican elected officials and platforms to adopt fair employment laws and other progressive civil rights reforms.

Moreover, Farrington demonstrates how black Republicans consequently helped Dwight Eisenhower and other Republicans win sizeable percentages of the black vote. Atlanta, where Eisenhower won 86 percent of the black vote in 1956, serves as an essential case study. Republican leaders such as John Wesley Dobbs and John H. Calhoun, among many others, formed the Atlanta Negro Voters’ League, a bi-partisan political organizing group, with A.T. Walden and other black Democrats. And through their voter registration campaign, the ANVL registered thousands of new voters, many as Republicans. Black Atlantans were also supporters of Richard Nixon in the 1960 presidential election. In large part due to John H. Calhoun’s organization of “the most extensive black Republican campaign in the country,” Nixon won almost 60 percent of the city’s black vote (113).2

It is worth noting that at that time, the decision to support the Republican Party in state and national politics was not unexpected in a state like Georgia, where leading Democratic politicians such as Senators Richard Russell and Herman Talmadge stood as staunch segregationists. Even as segregationists began to migrate into the Republican Party, black Republicans remained essential figures in the Georgia GOP, which maintained its Black-and-Tan composition into the 1960s.

In the 1960s, black Republicans were also the most vocal opponents of the conservative forces beginning to take over local and state Republican organizations particularly in the South and Southwest. After Nixon’s defeat in 1960, Black Republicans urged the GOP to adopt a strong civil rights platform. Liberal Republicans such as New York governor Nelson Rockefeller passed legislation that barred discrimination in housing, employment, bank loans, insurance, and in public accommodations. However, the conservative wing of the GOP began to take power in the national GOP in 1964, a move exemplified by the Georgia GOP’s expulsion of black representatives, including Atlanta’s Calhoun, from the state delegation to the party’s national convention. In response to their expulsion and the nomination of conservative leader Barry Goldwater, black Republicans formed the National Negro Republican Assembly and continued to fight for civil rights within the GOP. After Goldwater’s historic defeat by Lyndon Johnson, black Republicans used the opportunity to encourage the GOP to adopt a “big tent” approach and renew their outreach to black voters.

Despite the appearance that the fate of blacks and the GOP was determined, Farrington demonstrates that political fluidity remained in black politics at the local and state level. Massachusetts Republican Edward Brooke became the first black Senator since Reconstruction in 1966 and worked to advance equal opportunity within the GOP. Brooke and other black Republicans remained in the GOP because of their commitment to maintaining a two-party system in African American politics. Baseball legend and prominent black Republican Jackie Robinson explained that black American needed to be bipartisan so that they “may have the bargaining power necessary to gain for them the best of everything in our society” (166). As Farrington illustrates, black Republicans believed that some needed to stay behind and fight.

Farrington’s history of African Americans in the Republican Party provides nuanced insight into the fluidity of both the black political landscape and the GOP, two groups that whose political histories have often been over-determined. Despite its many merits, however, the book has some limitations. First, Farrington fails to adequately consider black political ideologies and how they informed party politics. He writes, “This book . . . examines the full ideological range of black Republicanism in the twentieth century, emphasizing their moderate and liberal stances on issues of social justice” (5). While Farrington is rightly seeking to correct narratives that have painted black Republicans as conservative, he does slight the conservative black Republicans who were active members of GOP institutions. Atlanta, for example, was home to many black conservative Republicans, who welcomed, for example, Clay Claiborne’s ultra-conservative Black Silent Majority Committee and created an active local chapter of the group. Notably, Atlanta’s black Republicans led wars on crime, supported the death penalty, and sought to reform welfare. But, in Farrington’s narrative, the conservative Republicans of the 1970s and 1980s – Clarence Thomas, Thomas Sowell, and Clarence Pendleton, and though he fails to mention her, Gloria Toote – seem to appear spontaneously as he detaches them from a longer tradition of conservative tradition within black politics.

On a similar note, because his project aims to place black Republicanism in the history of the GOP, Farrington fails to fully situate his black Republican characters within the broader black political landscape. Readers gain little insight into how black Republicans interacted with black Democrats in comparison to their interactions with white Republicans. Here his wide scope limits an in-depth analysis of local politics. A closer look at black politics in Atlanta in the 1960s and 1970s, for example, where black Republicans left behind ample records, could have addressed this gap. Figures such as Atlanta Daily World publisher C.A. Scott, alderman Q.V. Williamson, pastor William Holmes Borders, community activists John H. Calhoun and local NAACP director Jondell Johnson organized in groups such as the Fulton County Republican Council, the Lincoln-Douglass Club, and the Metropolitan Atlanta Republican Women’s Club to bring black Atlantans back to the Republican Party. With their appeals to black capitalism, law and order politics, and welfare reform, Atlanta’s black Republicans had a great deal in common with black Democrats such as Maynard Jackson and Andrew Young. Indeed, on many issues, black Democrats and Republicans in Atlanta converged, their class politics binding them together across partisan lines. While Farrington clearly outlines how blacks worked to push the GOP to defend civil rights and make appeals to black voters, less clear is how they worked to sell the Republican Party to black Americans. This aspect of the narrative begs for further analysis. Yet, as with the limitation above, Farrington cannot be faulted for failing to fully address issues that are outside of his scope.

Farrington can be taken to task, however, for one surprising flaw in his otherwise excellent analysis. He explains black Republicans’ perplexing commitment to an increasingly racist Republican Party by writing, “For one thing, the elite and professional classes that filled the ranks of black Republicans had no personal interest in Democratic economic issues” (163–64). This is quite an overstatement. Scholars of black politics such as Michael C. Dawson have persuasively argued that black Americans have historically subordinated their socio-economic self-interest for the good of the race broadly.3 This sense of linked fate, as Dawson describes, is maintained by the black media, socio-political and familial networks, and the proximity of many middle class blacks to poverty due to housing segregation. It might be that Farrington is challenging the dominance of this concept of linked fate, but in order to effectively do so, he must explicitly interrogate this central concept in his analysis of black politics.

In spite of these critiques, Farrington’s text serves as a timely reminder of the contested and contingent nature of African Americans politics, and American politics broadly. It also reminds readers of how local and state politics can often tell stories that challenge national narratives. This story of seemingly paradoxical black Republicans is much needed in this political moment. As the national party leaders continue to flout the will of the populace, this history illustrates how Americans can turn to local politics – the oft-overlooked congressional, state legislative, city council, and mayoral races – to generate political change.