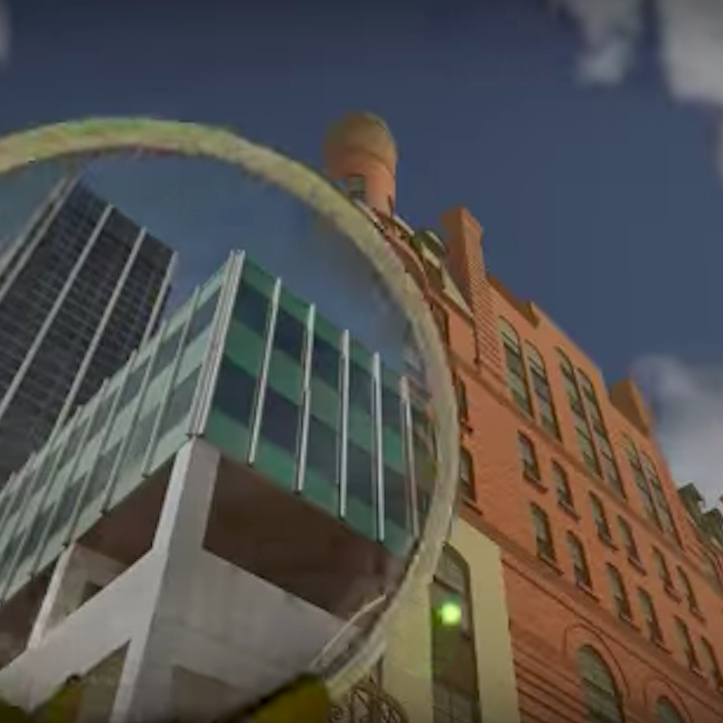 “Future Peeking” with the Chronolens in Atlanta Explorer

The Chronolens is the latest addition to the 3D visualization part of GSU and Emory’s Atlanta Explorer.

The project allows users to digitally experience Atlanta as it was in the 1920s, including many historically accurate buildings modeled from photos taken at the time, all of which are placed on a streetscape based on the digitization of the 1928 Atlanta Atlas. Eventually, users will be able to access historical data, explore the city’s buildings, and play games in this first-person virtual environment.

The virtual environment introduces users to many of the historically significant buildings that stood before parking lots came to dominate Atlanta’s downtown. But precisely because of these changes to the cityscape, users navigating among the historic buildings often have a hard time recognizing their whereabouts in the virtual world in relation to the city they know today.

We created the Chronolens — a “future peeking” device that displays modern day Atlanta through its lens from the same angle — so users can better orient themselves by simultaneously viewing a corner of the the city in 1928 and today while remaining in the virtual space. The modern day views are from Google Street View, part of Google Maps. In the video to the right documenting the use of the feature in 3D Atlanta, we focus on Bailey’s Theatre 81 where Ma Rainey and Bessie Smith played (now GSU’s Classroom South),1 the Kimball House Hotel (now a parking deck), and the Candler Building (which is still standing, affording a clear sense of the project’s level of accuracy).

With the Chronolens, users can not only identify their location but can also see how time has changed the city around them. We hope it enhances the experience, magnifying the significance of the historical landmarks and adding a powerful means of storytelling to the project.