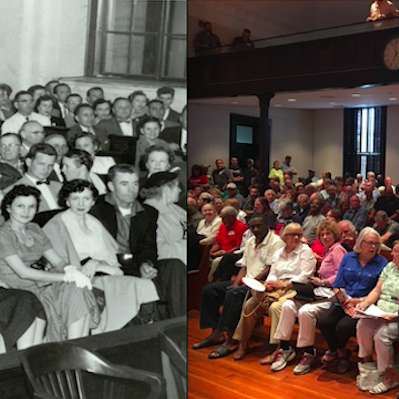 The summer and fall of 2016 brought some extremely troubling developments in American Islamophobia.

Along with an unusually high number of violent hate crimes, many civic leaders and prominent public figures made blatantly Islamophobic statements. It was amid this climate that I offered a course entitled “Islamophobia in America” at Emory University while serving as a visiting scholar at the James Weldon Johnson Institute for the Study of Race and Difference.1

I designed the course, intended to introduce students from multiple disciplines into sociological research around Islamophobia, as I completed my own recently published book on the subject, Islamophobia and Racism in America. Finding a good entry point into a complex, controversial issue like Islamophobia is perhaps the most challenging part of designing a course like this. How do you initiate a productive, critical discussion of Islamophobia – not just a recapitulation of television punditry or campaign talking points?

The timing of the start of the fall semester, mere days after Khalid Jabara was murdered by his next-door neighbor in Oklahoma who called him and his family “dirty Arabs,” made it particularly challenging to find a productive entry point.2 And, of course, this was amid a presidential campaign in which Islamophobia became a central issue, after then-presidential candidate Donald J. Trump called for a “total and complete shutdown” of Muslim American immigration.3

In a course like this, it is not enough to simply start with the latest headlines. When students have heard so much about this topic from the popular press, they tend to have preconceptions they would simply rehearse if our discussion began in the same place as a typical television talk show. At the same time, it also wouldn’t help students feel comfortable if we started the course with a close reading of eighteenth-century Barbary captivity narratives or by jumping directly into a foundational text like Edward Said’s Orientalism (1978). I wanted to set the stage from day one that this course would to go beyond the headlines but still facilitate accessible discussions in which students could freely speak their minds.

I ultimately decided to begin this difficult discussion by identifying a local entry point to the topic, to show students how Islamophobia in America is not just a distant issue playing out on television. Local points of contact with national (and global) issues like Islamophobia allow students to break out of their preconceptions and to question the dominant narratives that they see in the media. Instead of just quoting Trump or reading news coverage about the horrific crime in Oklahoma, I wanted students in this Atlanta-based course to learn about Middle Eastern American civil rights advocacy happening right here in town. Then, just as I was about to reach out to local Muslim American advocates as I arrived at Emory in early August 2016, two Islamophobic controversies exploded in the Atlanta area.

First, on August 16, 2016, citizens packed into a meeting of the Newton County Commission to demand a halt to a proposed new mosque Islamic cemetery.4 The Muslim congregation in that part of the Atlanta area had planned to build this mosque for quite some time, and they had already received all needed permits and approvals. At the last moment, organized opponents of the mosque descended on the meeting, demanding that the commissioners take the unprecedented step of blocking a religious group from constructing their house of worship. At the meeting, residents spoke out one after the next, echoing Islamophobic slurs and denouncing the nonexistent threats of Shariah law and terrorist training camps at American mosques. The pressure tactic worked.5 The commission voted to block construction on all religious buildings for five weeks, effectively giving in to the demands of the crowd by blocking the start of construction on the mosque.

Then, on the very next day, August 17, vandals broke in to the office of the Islamic Circle of North America office in Stone Mountain, Georgia.6 The attackers—who are still unidentified—broke into the charity’s pantry, destroying food that ICNA distributes to needy Georgians of all faiths. Amidst the investigation into this crime, the Newton County Commission cancelled a planned meeting to rescind the ban on mosque construction after they received violent threats from anti-Muslim extremists. Tensions were running high.7

These disturbing developments came just as I was preparing my first lecture of the semester. I decided to start the course by placing this local Atlanta story into a broader context. For example, the students discussed how crowding opponents into a meeting of policymakers to block construction of the mosque leveraged an old tactic often deployed in the Jim Crow era to enforce racial segregation.

To illustrate this, I showed a photo of DeKalb County residents in April 1956, who packed a court hearing in an effort to block the construction of a new racially integrated residential development.8 I juxtaposed that with a similar photo of the crowd at the August 2016 Newton County meeting where the mosque was blocked. This comparison made it all too clear that racist motivations remained a problem in the Atlanta area in the twenty-first century, despite the common belief that the cradle of the Civil Rights Movement had somehow moved past them. In the 1950s, the crowd at the meeting demanded that African American residents stay away, ranting and raving with racist stereotypes about black people. In the 2010s, the crowd demanded that Muslim Americans stay away, ranting and raving with stereotypes about Muslims.

Later in the semester, the Executive Director of the Georgia chapter of the Council on American-Islamic Relations (CAIR), Edward Ahmed Mitchell, came to Emory and met with the students. Mitchell described his ongoing work to coordinate with the Newton County commission to bring about a resolution to the dispute. The Newton County congregation of Muslims continued to meet with local leaders, seeking common ground to move forward with construction of the mosque and cemetery.

Meanwhile, students in the course created a new student organization, held teach-ins to educate the community about the dangers of racist rhetoric, and volunteered to get out the vote in the November 2016 election. In October, student activists helped organize what was described as the first-ever Muslim American get out the vote rally in Georgia, at the Center for Civil and Human Rights in downtown Atlanta.9 Some of the students in “Islamophobia in America” met with Mitchell and US Olympic fencing champion Ibtihaj Muhammad, who both spoke about the importance of engaging locally with global issues. The course ended shortly after Trump won the election, as some reported a chilling jump in the number of reports of Islamophobic hate crimes from around the country. 10 But our final classroom discussions, fortunately, moved beyond these headlines and toward possibilities for individuals to get involved—locally and pragmatically—in causes that may seem intractable. This was the endpoint I had hoped to reach when we started the course, and it all started by finding an Atlanta entry point for this larger-than-life topic.