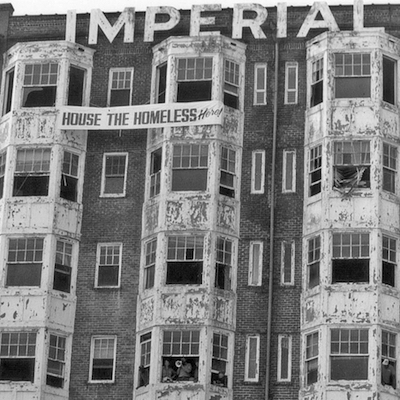 A “Lightning Strike” in the History of Atlanta’s Affordable Housing Development: Revisiting the 1990 Imperial Hotel Occupation

At 4:00 a.m. on June 18, 1990, eight activists from People for Urban Justice (PUJ) broke into the abandoned Imperial Hotel at the corner of Peachtree Street and Ralph McGill Boulevard in downtown Atlanta.

With a commitment to taking their Christian and civil rights era-inspired beliefs to the streets, the activists unfurled a banner from the top floor windows at 11:00 a.m. with the message “House the Homeless Here!” 1 They expected to be removed and arrested by noon, but police, city officials, and the hotel’s owner, noted Atlanta architect John Portman, had simply let them be. Portman would have had to file criminal trespass charges against the occupants for the police to remove them, but he declined to do so, likely because he did not want negative publicity.

PUJ decided to remain in the hotel until their demands for affordable housing were met or until they were forcibly removed. In the meantime, they opened the hotel to homeless people, and they all stayed through the night. That one night became the sixteen nights of the occupation of the Imperial Hotel. When reflecting on the place of this occupation in the history of activism in Atlanta, Charles Steffen characterized this street action as a social movement “without precedent” and “one of the most dramatic street actions in Atlanta since the student-led civil rights protests of the 1960s.” 2

In my book Raising Our Voices, Breaking the Chain: The Imperial Hotel Occupation as Prophetic Politics (Open Door Community Press, 2016), I document the dramatic events that occurred during those sixteen remarkable days in June 1990, primarily from the perspective of PUJ activists and those aligned with their interests. 3

People for Urban Justice and Rising Homelessness in Atlanta

Formed in early 1990, PUJ was a collaborative social justice movement comprising people from Open Door Community, Concerned Black Clergy, Metro Atlanta Task Force for the Homeless, and other faith-based and secular organizations. With nearly 10,000 homeless people in the city (an increase of roughly 50 percent from the early 1980s) the Imperial, empty and in severe disrepair, was emblematic of the larger failure of city leadership to provide ample affordable housing. As Steffen indicates in his Atlanta Studies essay, “The Rise and Fall of Atlanta’s Skid Row,” the sharp decrease in single-room occupancy housing in the 1970s and 1980s created a seismic shift, reducing the availability of affordable housing for people on the economic margins. Additionally, Steffen reveals how misplaced priorities like the development of (the failed) entertainment hub Underground Atlanta in the 1980s siphoned funding from projects and programs that could have benefitted Atlanta’s economically vulnerable populations.

During the sixteen days of the occupation, community was created among activists, homeless people, and sympathetic participants and observers. They shared food, water, and song. They spoke with resolve to the press. But that solidarity was then torn asunder when Mayor Maynard Jackson’s assistant, future two-term mayor Shirley Franklin negotiated clandestinely with leaders of homeless people in the hotel. Franklin promised homeless occupants jobs, temporary housing, and a commitment to the development of 3,500 units of affordable housing; in exchange, the hotel occupants agreed to leave. Some PUJ activists refused to leave the hotel, seeking a stronger commitment to develop 5,000 affordable housing units. In the end, six were arrested.

An Advance, on Balance

Despite these accomplishments, Loring, a central architect of the Imperial Hotel occupation, and an activist in Atlanta for over forty years suggested that the occupation was a failure.” 6

And yet, if we consider what was accomplished under the particular circumstances presented, the Imperial Hotel occupation can be seen as having at least limited success. Put another way, as framed by social movement theorists Frances Fox Piven and Richard Cloward, “The relevant question to ask is whether, on balance, the movement made gains or lost ground; whether it advanced the interests of [poor] people or set back those interests.” 7

Bill Jones, a homeless participant in the occupation, exclaimed that the takeover had done more in two weeks for homeless people than committees had done in seven years. Craig Taylor, a long-time developer of affordable housing, called the occupation a “lightning strike.” For Taylor, the takeover energized the development of affordable housing during the 1990s. Both the Imperial Hotel renovations (1996, 120 units, and again in 2014, 90 units) and the creation of Welcome House (1992, over 200 units) are direct legacies of the occupation. 8

These are examples of supportive housing stock, a type of affordable housing that provides on-site amenities for physical, mental, and social well-being. Other affordable housing units developed after 1990 (roughly 1,000 or so) are rooted in the Imperial occupation: the takeover spurred developers, influenced politicians, and tapped financial streams.

Clearly, the interests of poor people were advanced, at least minimally: affordable housing was developed. Moreover, activists and organizations individually and collectively built upon the occupation’s foundation. Instead of measuring the occupation based on what was not accomplished (3,500 units of affordable housing) it is perhaps more appropriate to consider what was possible under the conditions present during and after the occupation.We must not forget the intangible power unleashed when People for Urban Justice opened the hotel door and encouraged people from the streets to join them. When that door was opened a literal and figurative joining of hands occurred. Through this bond, housed and un-housed people acted in concert with their guts and their hearts. They were defiant, they challenged traditional authorities, they transgressed rules and laws laid down by authorities, and they demanded redress for their grievances. 9 Although the coalition that occupied the Imperial Hotel did not accomplish all of their aims, the action they took does illustrate that, as Piven and Cloward astutely inform us: “A placid poor get nothing, but a turbulent poor sometimes get something.” 10

Terry Easton is associate professor of English at the University of North Georgia. His other writings on Atlanta include “Geographies of Hope and Despair: Atlanta’s African American, Latino, and White Day Laborers” in Southern Spaces.