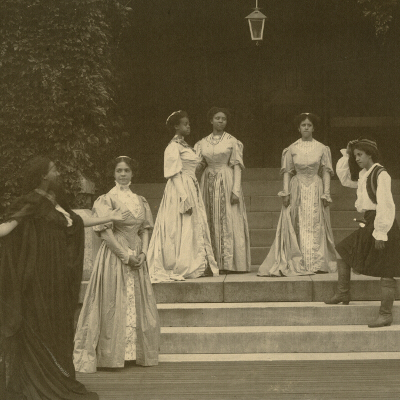 Shakespeare in Black and White: Atlanta, 1916

In 2016, like many other cities across the nation and around the globe, Atlanta played host to a year of celebrations commemorating the 400th anniversary of the death of William Shakespeare.

But now, at the start of 2017, in the wake of the past year’s traveling First Folios, festive theater seasons, and jubilant jazz funerals which brought people together from all walks of life, we might ask ourselves, why does Shakespeare actually matter to Atlanta? 1In Shakespeare: The Invention of the Human, Harold Bloom suggests that we all use Shakespeare to our advantage, to help us work through our crises and map out our hopes and dreams. 2

Through Shakespeare, we invent ourselves. Certainly Shakespeare is ubiquitous in our memories of high school English, but what is it about his work that endures, and what is it about Shakespeare that can help us better understand Atlanta as we look forward to the next one hundred years? One answer might lie a century ago in Atlanta’s history, during the last centenary celebrations of Shakespeare’s death. In 1916, the city considered itself the iconic Southern jewel, the Capital of the South, fast becoming the city “too busy to hate.” But this image of the burgeoning metropolis ignored the reality that, in 1913, Atlanta had just passed strict residential laws, officially segregating white and black residents, and as a whole it was still reeling from the effects of the 1906 race riot. 3 So the ideal of Atlanta seemed to be a rather fragile façade for a much different reality. And what emerges when we look closely at the celebrations of Shakespeare in the spring of that year are two Atlantas – one White, and one Black.

Producer Armond Carroll’s monumental spectacle of Shakespeare, a 2,000-member pageant commissioned by the Drama League of America, was performed on May 27, 1916 in Piedmont Park, one of the most prominent public spaces of White Atlanta at that time 4 In the very same space, just twenty years prior, Atlanta had staged its grand International Exposition in an attempt to announce a new and progressive South, and to present itself as a burgeoning metropolis set apart from the degrading stereotypes of its surrounding environment 5

Published later that year under the title A Pageant and Masque for the Shakespeare Tercentenary, the immersive show included actors playing famous Elizabethan figures like Queen Elizabeth and Shakespeare himself alongside personifications like “Time” and many of Shakespeare’s most popular characters, including Puck, Juliet, Lady Macbeth, and Falstaff. While not based on any specific play, Carroll’s elaborately staged pageant nonetheless played into an enduring myth of Shakespeare— namely, our ability to see something beyond ourselves which changes and recreates us in his works. In perpetuating this myth, Carroll’s seemingly integrated audience and performers of various social classes, regional origins, dialects, gender distinctions (all things present in Shakespeare’s work) also perpetuated a myth of diversity and inclusion in the city that ignored the reality of oppression for perhaps half its total population.

Moreover, the white American public who freely witnessed these massive festivals in Atlanta in 1916 found in these performances a potent means to ignore, escape, or sometimes deal with the global conflicts surrounding them and the racial divisions and prejudices within their own city and nation. 6 The Atlanta Constitution had advertised this elaborate production in dozens of articles and at the request of the Drama League, regularly compared Carroll’s production — one of the first major celebratory events in the city since the 1895 Exposition — with many other large scale festivals and productions around the country that year, including the 1,500-member production, Caliban by the Yellow Sands by Percy McKaye in New York and the even larger production of Julius Caesar in Hollywood, which featured some 5,000 well-known actors and amateurs. 7

Among other things, such comparisons illuminate how this production was as much a celebration of Atlanta as of Shakespeare, fitting neatly within the larger pattern historian Steven Goodson describes in which Atlanta’s stages not only provided entertainment, but also helped “build Atlanta’s reputation as the cultural capital of the Deep South.” 8 And though it should come as no surprise that such a large-scale event should garner coverage in the city’s paper of record, many small celebrations of Shakespeare’s tercentenary, such as lectures at Emory University, were also noted throughout the year, if only briefly. 9 However, nowhere in The Atlanta Constitution was there even a nod to the continuing, dignified tradition of Shakespeare performances only a few miles away from Carroll’s pageant, at Atlanta University.

In the March 1912 issue of The Crisis magazine, tucked in between editorials arguing against lynching and the perils of laissez-faire black optimism, there is a powerful black and white image spread across a full sheet depicting a group of black women, one with her arms outstretched, several costumed in long gowns, all standing on a platform and seemingly engaged in a kind of dialogue with a caption that provocatively reads, “The Drama in Colored America.” The “drama” that this photo captures is in fact one of Adrienne McNeil Herndon’s annual Shakespeare productions during the commencement season at Atlanta University. 10

Herndon, a trained actress, Atlanta University alumna, and wife of Atlanta’s first black millionaire, was, as literary scholar Patricia Cahill notes, responsible for introducing Shakespeare and elocution into the University curriculum in 1895 when she worked as one of the first black faculty members there, along with W. E. B. Du Bois. 11 The class day performances under her direction began in 1905 and followed with The Taming of the Shrew in 1906, continuing even past Herndon’s untimely death in 1910 until perhaps 1916, after which the school catalogue no longer updated them as a continued part of commencement. 12

During her fifteen-year tenure, Herndon, like many other black intellectuals of the time, believed in and struggled for racial uplift by cultivating and presenting to both blacks and whites the counter-image of black Americans as civilized, disciplined, intelligent, creative, and virtuous. Through her introduction and continued presentation of Shakespeare at Atlanta University, Herndon attempted to curate a reinvented idea of blackness that was a beautiful, productive, and viable part of the American dream. In her estimation, even Shakespeare, the preeminent white literary artist, could and ought to be included in efforts to re-imagine what it means to be Black in the new century. Thus, studying, performing, and embodying Shakespeare’s characters would enable the students to cultivate in themselves the aforementioned values of, to use the term of Alain Locke and her Morris Brown colleague, John Henry Adams, Jr., the “New Negro.” 13

Through Shakespeare, and perhaps the nature of theater itself, what seemed to become most useful for Herndon, her students, and her audience, was the capacity to both escape and confront the social realities of the world and particularly the divided city around them. 14Commencement season events in the last week of May such as Du Bois’s influential, annual Atlanta Conference, which promoted the institution as the seat of early sociology, provided Herndon’s all-Black student productions with an erudite audience, and in 1916, the timing of the class day production of Shakespeare’s The Taming of the Shrew (revived ten years after Herndon’s earlier production) closely corresponded with the date of Armond Carroll’s spectacular pageant across town in a public space perhaps off limits to many involved in the Atlanta University festivities. And yet, as Cahill argues, though Herndon’s 1916 production was part of a revered and ongoing Atlanta tradition, there was no recognition of it in or alongside the dozens of discussions of Carroll’s pageant and the larger tercentenary that occurred in the Atlanta Constitution.

It has been one hundred years since Herndon’s elocutionary Shakespeare productions fell completely out of the University curriculum and long since Carroll’s pageant fell out of living memory, yet a new Atlanta continues to work through its internal tensions and its outward portrayal as a welcoming, bustling metropolis. Racial divisions in the city and in the country have taken new forms but are as evident as ever. Though we have ended Shakespeare’s quadricentenary, we pause to consider, just as Atlanta did in 1916, why his work matters. Are we, like many in that year, using Shakespeare as a means to avoid the realities of the ever-changing and vastly diversifying world around us, holding fast to an old vanguard of exclusion and elitism in the name of security? Or will we, like others in 1916, intentionally use Shakespeare to fashion safe and accessible spaces for all bodies and to de-marginalize voices which continue to inhabit, migrate to, and speak boldly against injustices in the city and the nation? Or perhaps we can allow for both uses and recognize such multiplicity not as a mark of shame or a sign of metropolitan fracture, but perhaps, like the plurality of voices already within Shakespeare’s texts and on stages, an enduring model for the diversity of Atlanta itself.