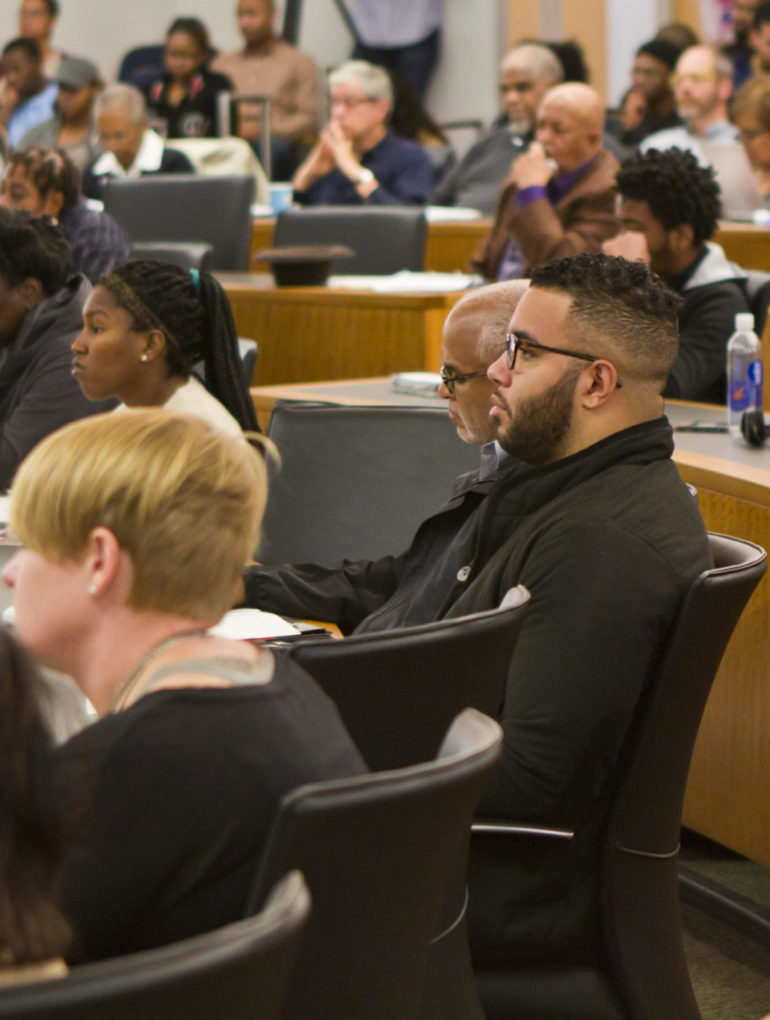 Reflecting on the “Still the Black Mecca?” Symposium: An Interview with Kali-Ahset Amen

The symposium Still the Black Mecca? Race, Social Inequality, and Urban Displacement in 21st-Century Atlanta was held at the GSU Law School on November 9, 2016.

In the following Q & A, symposium co-organizer Kali-Ashet Amen, Assistant Director of the James Weldon Johnson Institute at Emory University, reflects on the symposium’s aims and what comes next. Atlanta Studies will be publishing talks from the symposium in the coming weeks.

Why organize this Symposium now? What did you hope it would achieve?

At the Black Mecca symposium, our aim was to assemble scholars, activists, policymakers, students, and other members of the general public to discuss openly the current status of racial equity in Atlanta. As we consider the stakes of both the presidential and mayoral elections, my co-organizers Deirdre Oakley, Barbara Combs, and Zahra Alabanza and I thought this was the perfect time to examine the current racial moment in its historical context, to line up the facts and trends, and to assemble as much thought-leadership as possible to collectively imagine what racial justice and accountability can and should look like going forward.

Firstly, we are concerned with the complex of processes often neatly called gentrification. I think a lot of working class black people see gentrification as this leviathan that signals imminent relocation, and even black cultural erasure. These are real threats and traumas that households and communities are confronting, even while there is a lot of good coming out of some neighborhood reinvestment approaches in the city. But development in Atlanta need not be a zero-sum game reduced to experiences of winning and losing, of colonization and victimization.

This symposium was designed to enable productive exchanges about some of the concrete racial consequences of development and urban governance in Atlanta. What we were and hope to continue exploring is how change in the city works for or against racial equity. We are giving visibility to well-researched scholarly evidence, and we are lifting up grassroots solutions as an important base of experiential knowing. As academics, we felt an urgency to build community with our activist counterparts in order to bring their praxis together with our evidence and analytics. This was a space for doing that—and hopefully the first of many.

Racial equity was a central theme of the symposium. Can you tease out what was intended by that phrase?

Yes. So, this symposium was explicitly about equity – not equal opportunity, not access, not “diversity” – but rather, racial equity; which is to say, we are concerned with the evaluation of fairness and justice in both the policies and the business deals that are being brokered in the name of urban progress.

When urban megaprojects and revitalization schemes obviously displace communities of color, what does that mean for racial justice? This is a key concern we’re trying to put on the table – the justice question – because local development can’t be reduced to colorblind economics. There are ethical matters at stake. These ethical propositions have racial substance to them.By looking at valid predictions and measurable outcomes for black folks and other economically marginal groups, we are saying, look, race must be a part of the development calculus and policy prescriptions must be refined in ways that intentionally inscribe “race.” And not just in the coded language of “affordable housing,” for instance, but in plain terms – as an intentional part of the policy script.

It has already become well-known that race and class inequality are major issues in Atlanta and there has been a skepticism about the black mecca idea for a long time. So what else were you hoping people would take away from this Symposium?

As the black mecca idea suggests, black people have always been integral to building this city. And today, black Atlantans are still at the vanguard of shaping the city’s global reputation, particularly in the cultural sphere. So despite Atlanta’s own ambiguities about the state of the black mecca, the black mecca idea has already been exported as a global project. The question is, what does it need to look like as a local project under current conditions?

In this vein, another goal of the symposium was to lift up “equity solutions.” And so we had a TED talk–style session, featuring presentations by local activists and scholars about interventions, specific to Atlanta, that have actually proven effective in supporting fair outcomes for vulnerable communities, with a focus on historically black and immigrant communities.

Finally, in the symposium’s culminating session, we wanted to look at both the problems and the solutions systemically. To that end, we incorporated the framework of multiracial coalition provided to us by the Movement 4 Black Lives in the way we composed the panel and articulated the task set out to them.

Can you say more about this framework?

This past August, a group of Black Lives Matter organizations disseminated a six-point policy platform for racial justice. The policy recommendations they offer are national in scope. So we decided to look up close at how some of those ideas can be brought down to the ground level right here in Atlanta. How might we begin to envision a local economic and social agenda that explicitly places value on black lives and Black Life itself? How, for example, do we support truly democratic community involvement in oversight of local law enforcement? How can we seed economic justice imperatives into a MARTA system expansion that actually serves the black working class?

The Black Mecca was born through biracial coalition, but for the black mecca to be true to its name in the present moment, we are going to need a practical vision of multiracial, queer, and immigrant equity that is grounded in political commitments to black and brown thriving. Without that kind of intentionality, and multiracial mobilizing toward those ends, the black mecca idea loses all foundation.

That’s a big task. Isn’t this a job for the policy community? Or for activists? Why is this so important to the three universities that are co-sponsoring this symposium?

Some would say that it is not the place of the academic to assert what should or must be done about inequity. They might say that our only job is to present the social facts. And I agree – with a caveat. In organizing this symposium we marshalled some of the city’s most prolific scholars and scholar-activists from Emory, Georgia State, Georgia Tech, Clark Atlanta, and Spelman to share their research in an accessible platform that truly embodies the spirit of scholar activism pioneered by the likes of James Weldon Johnson and W. E. B. DuBois. With the legacy of these luminaries in mind, our response would be: what use is scholarship without application? What is the point of social science if not put in the service of social change?

Now that the symposium is past, what comes next?

Obviously, this conversation is only a beginning. A variety of materials drawn from and building on this symposium will be published in the coming weeks at Atlanta Studies, including videos from the symposium, and blog posts and articles expanding on some of the talks given. In addition, Deirdre Oakley and I are serving as guest co-editors of a forthcoming special issue of the Journal of Urban Affairs entitled “Black Meccas of the Americas,” which will continue and expand on the conversations we had at the symposium.And it is important to note that we know we are not the only collective of concerned citizens. There has been a proliferation of “Race in Atlanta” conversations in recent years. And there are really committed changemakers out there who are consistently walking the talk when it comes to issues of equitable development. I am thinking of certain philanthropic organizations like W.K. Kellogg and Annie E. Casey, and of leaders like Nathanial Smith of Partnership for Southern Equity and Mtamanika Youngblood of Sweet Auburn Works, all of whom are doing outstanding work.

As academics, there is only so much we can do to turn these conversations into something concrete politically. Policy coordination is beyond our purview. But we do want to do more collaboratively among ourselves to develop inter-institutional infrastructure for research on Atlanta, for Atlanta. Georgia State University is really ground-zero for this kind of work. As the home of the inter-institutional Atlanta Studies Network and Atlanta Studies Journal, Emory is contributing its piece as well. In the Atlanta University Center, Professor Obie Clayton, Sociology and Criminal Justice Chair at CAU, is spearheading some amazing empirical projects.

Ultimately, the symposium partners are trying to build density around Atlanta-focused scholarship, so that changemakers in both the policy and activist arenas know exactly where to go for good data and good solutions that keep race at the center.

The bottom line is that we care about Atlanta’s future and about ensuring that everyone has a stake in shaping it.